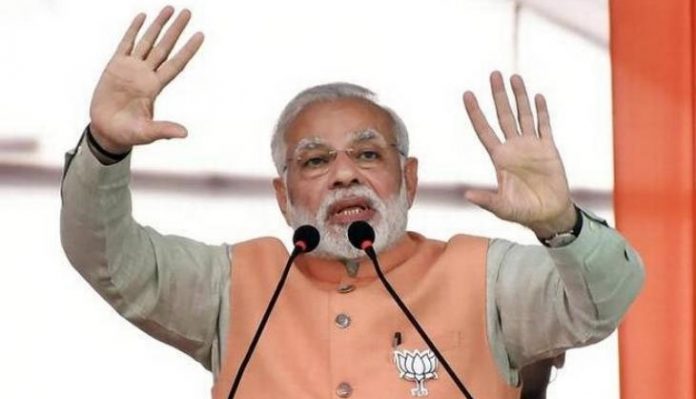 India never has been so much ‘put to censure’ anywhere abroad, that too in United States of America (US), as to what has come to light, through a speech of 2 minutes and four seconds, by Vijay Lakshmi Nadar, herself a born Hindu, on October 12. She is the Bureau Chief of The India Observer, who spoke at at Canton Michigan, US. The speech is worthy to enumerate word-by-word and transcribed, for the people of India, who have been brain-washed, by the onslaught of Modi-centric media alongside the BJP IT cell. The speech reproduced as a transcript below is available on her twitter account. 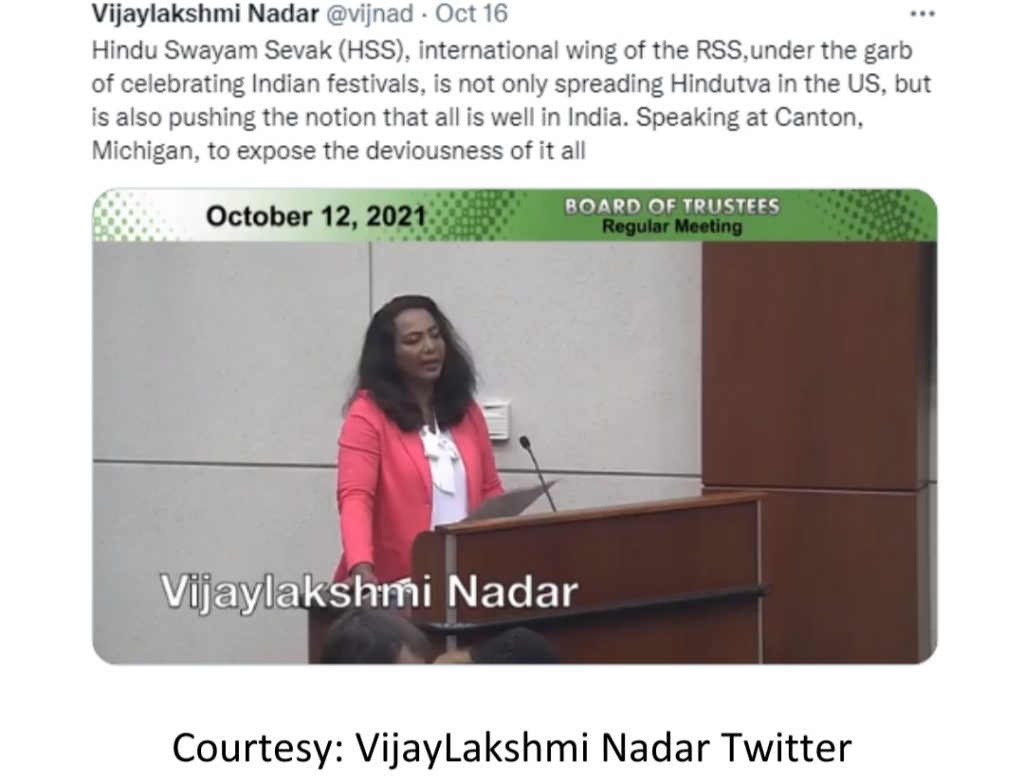 India has been taken-over by an extremist authoritarian regime headed by PM Narendra Modi since May 2014. Attempts are on to cover the extreme degradation of the country and its democratic institutions under Modi to ensure that the international community as well as the Indian Diaspora in the US keeps the focus away from all that is wrong in the country. As a born Hindu myself living in the US I feel compelled to reveal the larger game of not just the Indian government under Modi but also his supporters in the US. PM Modi is the product of the RSS a right wing para-military group inspired by the Nazis.

The international wing of the RSS, the HSS and its allies including the world Hindu Council of America, Hindu American Foundation, Hindu Students Council operating in several US universities supposedly to celebrate Hindu culture and doing exactly the opposite. Modi and his ministers are using Hinduism to spread extreme hate against the minorities whether it is Muslims, Christians, Sikhs or Dalits. The hate is bring perpetrated to enable the government to get away with mass scale corruption and looting. Modi and his supporters propagate the Hindutva philosophy which is nothing but a saffron terror group not related to Hindusim . Modi supporters who have lived in the US for decades are pushing the radical Hindutva aggressively in every city and state in the US not endorsed by most Indians especially the Hindus.

The US needs to wake up to the prospect of harboring Hindutva without being aware of it. US needs India to keep a check on countries like China and Pakistan and Afghanistan but a terribly weak cruel pompous arrogant narcissist PM who is weakening his own country destroying the progress gained over 70 years in just seven short years cannot be possible anybody’s ally. God bless America andf God Bless India

It is now more than a month since this speech happened, but not even a speck of discussion on it, in any part of mainstream media! Is this how the watch-dog agency is keeping to its promise, except to perpetuate Modi government’s interests? Does not the event concerns the image of India and Indians in US, even if what may be called as trifle-little by the standards held in India. By any standard, however, the speech is a mirror put to what has been getting cooked in India, since, 2014, as probably by now every institution has been co-opted by the government, and is bereft, from even a semblance of independent-autonomy.

The overall situation, by and large, has become sterile. There are thousands of evidences when government institutions are continually being exercised to harass the opposition and the latest to add has been the Ordinance to extend the tenure of Central Bureau of Investigation (CBI) and Enforcement Directorate (ED) Chiefs. Obviously, this has rattled the entire opposition in the country and Trinamool Congress MP, from west Bengal, has moved to Supreme Court against the Ordinance citing it as against the Court’s rulings. What is ironic that while CBI and ED Chiefs, who have allegedly acted under the thumbnail of the government, have been given extensions, while the Right To Information (RTI) Commissioners, who are to uphold transparency, and are supposedly the watch-dogs of corruption, have been curtailed with their tenures.

Irrespective of what the voices from US, citing glaring alarm signals, there is still the same widespread eulogizing of BJP and its various governments by nearly all the sections of media, with just one or two exceptions, but only for the social-media platforms which has been the only stumbling block, in this roller-coaster ride of BJP. Media, is the only organ which seem to run the government, it is freewheeling every sweet-will of the government, galvanizing it for the fore, and at the same time, intimidating the Opposition, which is entirely opposite to the very testament of media. Media has to question the government not the Opposition, whereas, here Opposition is a harried lot. No wonder, when Narendra Modi met US President Joseph Biden, he aired-his-views on media in India to be so well behaved! Something which made US media to scoff at.

It may be rightly stated that perhaps, never in the history of Independent India, there have been such nasty accolades (sic) as have been aired by Vijay Lakshmi Nadar, towards any PM of India ranging it from JL Nehru until the last. Why hasn’t there been any primetime coverage to the carnage of Muslims in Tripura? Why never a debate is  organized around the organizers of the Delhi Riots of February 2020? The likes of Kapil Mishra, Anurag Thakur, Parvesh Verma are still scot-free and instead have been the darling of most of the media-platforms. Obviously, all such media-houses have now become the extended offices of BJP, there is just no more a gloss-over needed over it. Sections of Indian media are now ‘unto thyself’ into having become a propaganda tool-kit of the government and nothing else.

But, the world is watching India descent into chaos. The three-black farmer laws, by the BJP, have been forced to be withdrawn, but since more than an year, BJP forced farmers to leave their houses and brave the rain, winters and the biting sun, and die in hundreds, until the rout for BJP was set to become imminent. Will UP make BJP pay for its sins in 2022. Perhaps, yes.

Now the RSS is dividing Indian community in US