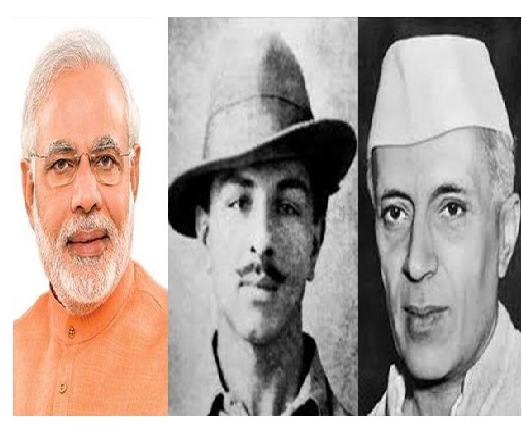 In the recently held Karnataka elections, Narendra Modi made statements which are not true, and which are made to raise the emotive pitch against his opponents. In a blatant lie, in a rally in Bidar, he asked “When Shaheed Bhagat Singh, Batukeshwar Dutt, Veer Savarkar, greats like them were jailed fighting for the country’s independence, did any Congress leader went to meet them?…” One is surprised as to how this can be an electoral issue today? The central tactic of BJP and communal organizations is to bypass the issues related to people’s needs and to distract the attention towards one’s related to emotive issues. Issues which can put his opponents in a bad light have been regularly resorted to by Modi. For creating this Modi can go to the extent of saying untruths with great amount of confidence. In this statement-question raised; he is speaking a lie on one side and is also trying to glorify his icon Savarkar on the other.

As a matter of fact, INC, while it had differences with the revolutionaries like Bhagat Singh, they respected the high level of commitment and dedication of these young men. There are reports in the Tribune  about Nehru visiting the jail to meet Bhagat Sing and his comrades, The reports in Tribune on August 9 and 10of 1929, tell us about Nehru’s meeting the jailed revolutionaries, inquiring on them. Motilal Nehru had even formed a committee to demand the humane treatment for the revolutionaries on fast unto death. In his autobiography, ‘Towards Freedom’, Jawaharlal Nehru gives a very touching account of his meeting Bhagat Singh, Jatin Das and other young men, “I happened to be in Lahore when the hunger strike was already a month old. I was given permission to visit some of the prisoners in the prison, and I availed myself of this. I saw Bhagat Singh for the first time, and Jatindranath Das and a few others. They were all very weak and bedridden, and it was hardly possible to talk to them much. Bhagat Singh had an attractive, intellectual face, remarkably calm and peaceful. There seemed to be no anger in it. He looked and talked with great gentleness, but then I suppose that anyone who has been fasting for a month will look spiritual and gentle. Jatin Das looked milder still, soft and gentle like a young girl. He was in considerable pain when I saw him. He died later, as a result of fasting, on the sixty-first day of the hunger strike.”

The other aspect of the statement by Modi is to equate Savarkar with the dedicated young revolutionaries like Bhagat Singh. This seems to be a clever ploy to elevate Savarkar to the level to which he did not belong. While Bhagat was in jail, pending death penalty, he was requested by his family to seek clemency, which Bhagat refused. On the contrary he wrote to the British Government that since he and his comrades have been sentenced to death for waging war against the empire, he should be made to face the firing squad not just death by hanging. On the contrary Savarkar, after being sentenced for his role in the case of murder of a British officer; totally changed his stance in jail. From an anti British role he wrote series of apology letters, he surrendered to British and promised them to be of their help in future! He did remain loyal to British after his release from jail.

As a matter of fact Congress in recognition of Savarkar’s initial role was trying to put pressure on British Government for his release, but Savarkar was already writing petition after petition to British to release him. From 1920 INC was asking for his unconditional release, but due to reasons best known to him Savarkar preferred to give a written undertaking, which in a way was the total surrender. “I hereby acknowledge that I had a fair trial and just sentence. I heartily abhor methods of violence resorted to in days gone by and I feel myself duty bound to uphold law and constitution (British, added) to the best of my powers and am willing to make the ‘reform’ a success in so far as I may be allowed to do so in future” (from facsimile of Savarkar’s letter to British authorities). There are many such letters and British did grant him clemency.

This act of his seeking pardon from British was a betrayal of freedom movement; his followers present it as a tactical ploy to get released so that he can struggle against British rule. As matter of fact after his release Savarkar, floated the concept of Hindu nationalism, brought to fore the word Hindutva, (total Hinduness) and stated that there are two nations in the country, Hindu national and Muslim nation! This was precisely the equal and opposite of the politics of Muslim nationalism being brought up by Muslim league. This is what also contributed to partition tragedy.

So Mr. Modi on one hand speaks a lie about Congress leaders ignoring those struggling for freedom. On the other he puts Savarkar in the same category as Bhagat Singh. Congress was trying to get Savarkar released. Bhagat Singh remained firm on his ideology and path of resistance against British power. For his principles he undertook a hunger strike in jail. Savarkar on the other side buckled under the jail conditions and surrendered to the British. The methods like that of Goebbels methods being resorted by Modi need to be opposed.