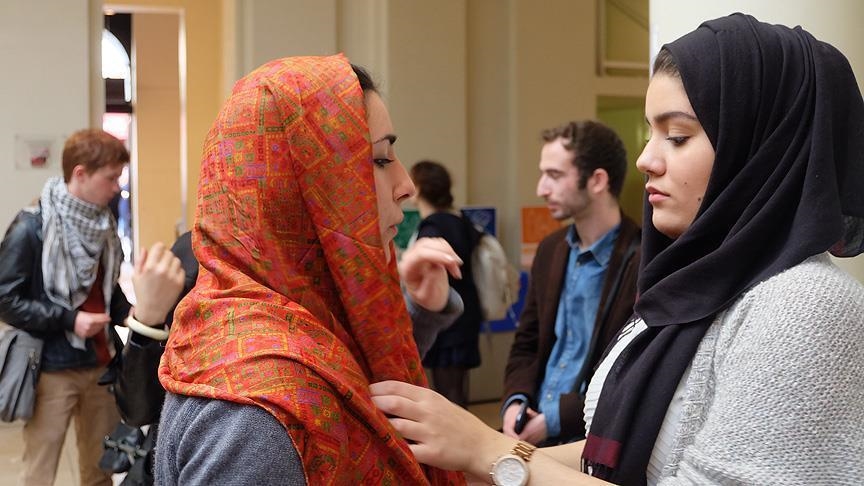 PARIS : The Islamic headscarf has emerged as a major polarizing issue during the presidential election for allegedly being antithetical to France’s fundamental value of secularism.

The veil, or headscarf, has always been a highly charged issue for the French political class and a compulsive phobia for the right.

It has been called by some a symbol of submission, an Islamist uniform — incompatible with French values and a way to impose Sharia on France.

French Muslims, estimated at 6 million, are a minority but every election infuses a new debate around the veil, in particular with politicians vowing to restore French values and uphold gender equality by a selective or complete ban.

The piece of clothing worn by Muslim women is featured in political debates alongside other issues including determining the retirement age, improving purchasing power of the French, the Ukraine war, tax cuts on energy and fuel, health and security — all with less than 10 days before the second round of voting on April 24.

Right-wing candidate Marine Le Pen has made the veil a part of her political manifesto and promised to ban it in public spaces if she becomes president.

President Emmanuel Macron, whose government introduced controversial legislation dubbed the anti-separatism law, or “reinforcing the respect of the principles of the Republic,” to battle so-called Islamist radicalism, excluded the veil from his electoral program.

But he has been forced to counter his opponent’s diabolical discourse by frequently discussing the issue.

On Friday, the finalists were challenged by veiled Muslim women about their policies, with Le Pen maintaining that she was firm on a ban and defended the choice of those wearing it out of free will.

In a market in Pertuis in the Provence-Alpes-Cote d’Azur region in southeastern France, Le Pen was questioned by a hijab-wearing woman about her proposed ban.

Le Pen has called the ban “essential” and vowed to introduce a bill prohibiting the veil in public places with a penalty for those who violate it.

Macron said he is not “obsessed” with the headscarf as his opponent and did not consider it a “real issue” that needed to be tackled.

“It’s (headscarf) a symptom of a tension in the society, that’s why I tried to separate the issues,” he clarified on FranceInfo in response to a question by Sara El-Attar, a communication professional in Paris, about the ostracization of hijab-wearing women.

Macron justified his position that during his five-year term, he strived to ensure that Islamic “compatriots live in a peaceful way.”

His government worked to identify the root cause of the problem and target them through the “separatism bill,” not change the laws for “everyone,” he said.

The controversial legislation to keep a check on radical Islam and fight extremism has been criticized for unfairly targeting the Muslim population.

A 2004 law prohibits the wearing or open display of religious symbols in all French schools, libraries and government buildings to uphold the principle of secularism.

Despite his liberal views, Macron’s Republic on the Move party, withdrew support for a hijab-wearing candidate during regional elections last June after her campaign poster with a headscarf drew criticism from Le Pen’s party.

Although Le Pen and Macron have expressed divergent views on the veil, both cited examples of little girls who are forced to wear the veil and not allowed to study in public schools and said such treatment is an attack on the laws of the Republic and gender equality.

This week, as Le Pen started to speak firmly on the need to enforce the prohibition on the veil, Macron positioned himself as a liberal defender of freedom of choice.

“There is no country in the world that prohibits the veil on the public highway, you want to be the first?” he asked while campaigning in Le Havre.

In Strasbourg, a clip of Macron’s interaction with a young hijab-wearing woman went viral as they both questioned if the other was a “feminist.”

After they responded affirmatively, Macron asked her if she was wearing the veil “by choice or is it compulsory?”

“Totally by choice,” she said.

“Having a young girl wearing the veil in Strasbourg who says: ‘Are you a feminist?’ is the best answer to all the nonsense that I hear on the other side,” he said.

Earlier, Macron said banning religious symbols in public is not laicite — the term for secularism requiring separation of church from state as stipulated by a 1905 law.

And if Le Pen bans the veil in public spaces, then she will have to ban all religious symbols: the Jewish kippah, the Christian crucifix as well as per the Constitution, said Macron.— AA