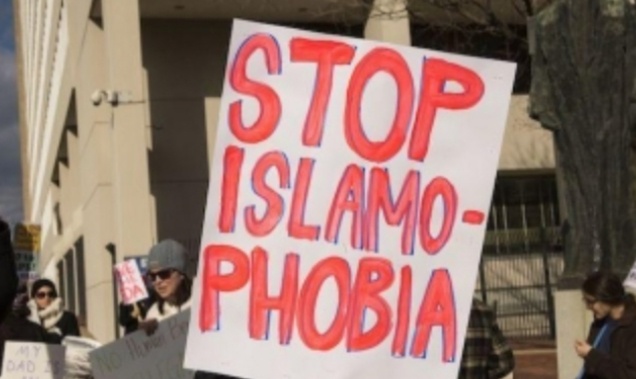 Washington DC:  Responding to the allegations of the Middle East Forum (MEF), the Indian American Muslim Council (IAMC) said it a widely discredited Islamophobic organization which has made baseless allegations about IAMC having links with “violent and extremist” entities. IAMC said the ludicrous attack from the MEF which is hobnobbing with Hindu extremist groups in the US is meant to blunt the impact of IAMC as it has been playing proactive role in safeguarding India’s pluralist and tolerant ethos.

The Sunday Guardian Live article, written by Benjamin Baird of the MEF makes baseless allegations about IAMC having links with “violent and extremist” entities, which includes individuals such as India’s Vice President Dr. Hamid Ansari as well as prominent writer and social activist Mr. Harsh Mander, who is a featured speaker at Amnesty International.

In its response in the form of a letter to the publication ridiculing the attack against IAMC and its coalition partners, comprising of prominent human rights defenders in the US and India, IAMC said the pathetic attacks published in this barely known online publication, are astounding for their sheer absurdity.

Issuing a statement to the media,  the advocacy group said they also demonstrate the desperation of Hindu nationalist front organizations in the US to besmirch IAMC, even at the expense of collaborating with ‘racist and xenophobic’ organizations like MEF that have no credibility. They are a continuation of the attacks initiated by MEF in an “opinion” piece published by Newsweek in December.

The statement highlighted  that:

“What is the Middle East Forum?

Middle East Forum has earned well-deserved notoriety as a well-funded racist group with a track record of xenophobia, bigotry, racism and hate-mongering. It has been called out by the Southern Poverty Law Center as well as the Center for American Progress, and is widely acknowledged as a rabid Islamophobic organization that revels in peddling hate and disinformation.

MEF is not only notorious for its Islamophobic views but has also inspired terror attacks in the past. The MEF and its founder Daniel Pipes were cited sixteen times in far-right mass murderer Anders Breivik’s manifesto detailing his motivations for his July 2011 attack that resulted in the killing of 77 people.

Additional details about MEF and its reputation for having “spent the better part of three decades vilifying Muslims,” can be found in the open letter.

Why are they attacking IAMC?

Hindu nationalist front organizations in the US have entered into a collaboration with MEF, in order to blunt the impact of IAMC and other organizations advocating for the defense of human rights and religious freedom in India.

In December 2020, Newsweek published a piece by Sam Westrop, who works for the MEF, alleging IAMC to be an “anti-Hindu, Islamist organization” with alleged links to an extremist organization in India. This is the same Sam Westrop who was ordered by a British court in 2017, to pay damages of £140,000 for falsely claiming in an article that a Tunisian Muslim man was a “convicted terrorist.”

Notably, after IAMC tweeted its second letter to Newsweek expressing displeasure with Westrop’s canard, the editor-at-large of Newsweek Naveed Jamali, wrote on Twitter that “people like Sam Westrop or the Middle Eastern Forum shouldn’t be given a platform.”

The piece published in Sunday Guardian Live is written by another MEF employee Benjamin Baird. Baird builds on Westrop’s distortions to craft an image of IAMC with the goal of undermining our advocacy for peace, pluralism and justice. Far from hurting IAMC, the piece is a classic example of cyber-lynch mobs that Hindu nationalist front organizations are now unleashing in the US, imitating the physical lynch mobs that countless Muslims and Dalits have fallen victim to in India.

One of the leading Hindu nationalist organizations in the US that is visibly collaborating with MEF to attack US groups working for human rights in India is the Hindu American Foundation (HAF).

Who is Hindu American Foundation?

Hindu American Foundation (HAF) is an apologist for Hindu nationalism and the RSS-BJP ideology of Hindutva in the US. Since its inception HAF has worked to deflect any scrutiny of the rapidly deteriorating situation in India with respect to human rights and religious freedom. Recently HAF staff have spoken at an MEF event, peddling the same lies about IAMC that are now being regurgitated by their partners at MEF. The reason for HAF’s ire against IAMC? The fact that IAMC has testified before the Tom Lantos Human Rights Commission of the US House of Representatives and works closely with members of Congress, Congressional Committees, US Department of State, the US Commission on International Religious Freedom (USCIRF), Human Rights Watch, Amnesty International and the UN Special Rapporteur to bring international attention to the plight of India’s social and religious minorities, including Muslims, Christians, Sikhs and Dalits. An HAF surrogate is now desperately trying to malign IAMC’s allies in civil society, including credible Hindu organizations such as Hindus For Human Rights.”

Before addressing the allegations, which are detailed in the open letter to Sunday Guardian Live, it is important to first highlight the deceptive methods used by Benjamin Baird and his colleagues at MEF. These include extensively referring to discredited, disinformation websites, providing links to their own articles that provide no proof for their claims and relying on quotes provided by anonymous sources in biased articles.

Mr. Baird takes issue with IAMC for having invited noted columnist and internationally acclaimed activist Harsh Mander. Mr. Mander served as Special Commissioner to the Supreme Court of India and was a member of the National Advisory Council of the Government of India. He was a member of one of the core groups that are part of the National Human Rights Commission of India and has been conferred with multiple awards for his significant contributions to peace and social justice.

Mr. Baird’s attack on Harsh Mander references an opinion piece from a well known Hindu nationalist fake news factory called OpIndia, which has been rejected as a credible news source by the International Fact Check Network (IFCN). This piece alleges that Mr. Mander’s activism does not align with India’s interests, given that he signed the mercy petition for Yakub Memon, Ajmal Kasab and Afzal Guru. As an activist, Mr. Mander opposes capital punishment per se, and his opposition to Yakub Memon’s execution was shared by the head of the counter-terrorism unit of India’s Research and Analysis Wing (RAW). Incidentally, the RAW counter-terror chief was also opposed to the hanging of Afzal Guru citing his opposition to the death penalty.

The other allegations against IAMC are similarly absurd and lacking any serious substantiation or merit. For a detailed rebuttal to these allegations, please read the open letter.

Why is IAMC issuing this rebuttal?

While the allegations themselves are meritless and have zero potential to harm IAMC or its allies, IAMC has decided to leverage the ridiculous attacks to expose MEF and their Hindutva collaborators in the US.

Hindu nationalist front organizations going to the extent of collaborating with racist groups like MEF whose principals view “brown skinned immigrants” with contempt and scorn actually validates the effectiveness of IAMC’s advocacy and speaks to the desperation of Hindu nationalists.”

The advocacy group urged  everyone interested in the details of the absurd attack on IAMC to read the open letter to Sunday Guardian Live which provides a window into the minds of the bigoted individuals who are behind these attacks and for whom facts do not matter.

Acquittal of RSS, BJP leaders in Babri mosque demolition is a travesty of justice : Indian Americans