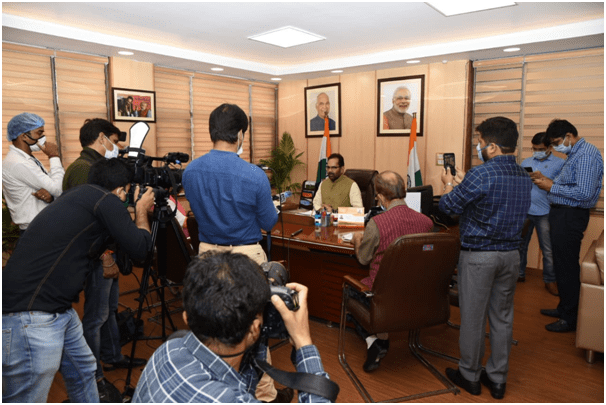 New Delhi:  It’s now official that not a single Muslim pilgrim from India will go to Saudi Arabia to perform Hajj 2020.  Union Minority Affairs Minister Mukhtar Abbas Naqvi on Tuesday announced that India will honour  Saudi government’s decision of not allowing pilgrims from outside Saudi Arabia for this year Hajj due to the Corona pandemic. Over 2.13 lakh Indian Muslims were supposed to perform Hajj this year but none of them will get this opportunity.

Addressing a press conference at the ministry headquarters here, the Minority minister Naqvi   informed that honouring the decision of the Saudi Arabia Government because of serious challenges of Corona pandemic and keeping in mind the health and well-being of the people, it has been decided that Muslims from India will not go to Saudi Arabia to perform Hajj (1441 H/2020 AD).

He told reporters that he received a phone call from Haj & Umrah Minister of the Kingdom of Saudi Arabia, Dr. Mohammad Saleh bin Taher Benten  on Monday  in this regard.

The Saudi Arabia Minister suggested not sending Haj pilgrims from India to Haj for this year (1441 H/ 2020 AD) due to Corona pandemic threat and  to preserve “global public health.”

Naqvi said he discussed the matter at length and agreed that the entire world is facing challenges of the Corona pandemic and Saudi Arabia has also been affected by the pandemic.

Jeddah-based Indian journalist, Siraj Wahab told Muslim Mirror that Hajj 2020 will only be open to a limited number of pilgrims of different nationalities who are already living in the Kingdom. There will be no pilgrims from outside Saudi Arabia this year.  Wahab, who covers Hajj every year said it is wise, and pragmatic decision and in accordance with coronavirus precautionary measures.

While providing details about the   Haj arrangement done by the Haj Committee of India, Minority Minister Naqvi said this year, more than 2300 women had applied to perform Hajj without Mehram. These women will be allowed to go to Haj 2021 on the basis of their application for Haj 2020 only. Besides, women who file new applications will also be allowed to go to Hajj next year.

He said that a total of 2 lakh Indian Muslims had performed Hajj in 2019. These pilgrims included 50 per cent women. A total of 3,040 women have performed Haj after the Government ensured Muslim women can perform Haj without Mehram (male companion) in 2018.

According to the Central Haj Committee of India, 2 lakh 13,000 applications had been received for Haj 2020. The process has been started today to immediately refund the full amount of money deposited by the applicants without any deduction. The money will be refunded through online DBT mode into bank accounts of the applicants.

It is to be noted that Saudi Arabia Ministry of Haj and Umrah issued a statement which says “Due to Corona pandemic and the risks of Coronavirus spreading in crowded spaces and large gatherings, it has been decided that Haj for this year (1441 H/ 2020 AD) will be held whereby a very limited number of pilgrims from various nationalities who already reside in Saudi Arabia, would be able to perform it.  This decision is taken to ensure Haj is performed in a safe manner from a public health perspective while observing all preventative measures and the necessary social distancing protocols.”

Wahab further said that, “Only people residing in Saudi Arabia, who are under 65 years of age and who do not have chronic diseases, will be allowed to perform Hajj this year. They will get tested before arriving at the holy sites and will be subject to self-isolation after performing Hajj.”

He informed those pilgrims  from various nationalities will be allowed to perform Hajj who  already reside in Saudi Arabia and added that the Saudi Hajj Ministry will cooperate with foreign embassies in the Kingdom to determine the number of eligible non-Saudi residents.