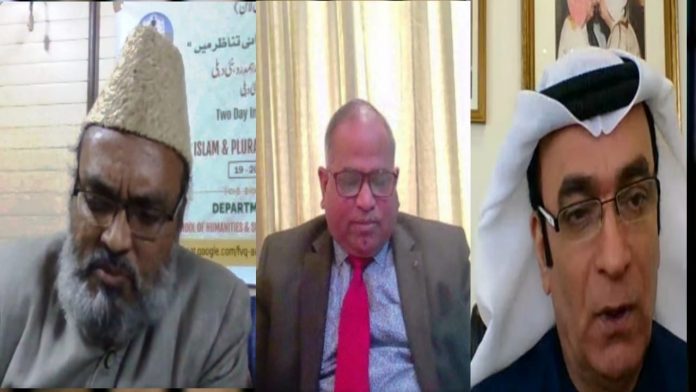 New Delhi: The Department of Islamic Studies, Jamia Hamdard organised a two-day virtual seminar on “Islam and pluralism: The Indian Perspective” on 19-20 January, 2022. Research papers and deliberations of the seminar are expected to help come out with critical aspects of inter-community and inter-religious relations and identify the gaps, which have widened over the years between different religious communities.

Ambassador of UAE to India, Dr Ahmed Abdul Rahman Abdul Rahman Al-Banna, attended the inaugural session as a chief guest. During his address, he said that several verses of the Qur’an speak about plurality of human beings.

“India has a flourishing history of pluralism thriving for thousands of years,” he said, adding that the UAE has the largest Indian diaspora of more than 3.5 million people which “shows our acceptance of plurality.”

Maulana Khalid Saifullah Rahmani, General Secretary of All India Muslim Personal Law Board said that Islam accepted pluralistic society both in the Prophet’s life in Makkah as well as in Madina. The Qur’anic idea of “for you your deen (religion/path) and for me my deen” is a clear example of accepting pluralism.

The public usage of the term ghair or ‘other’ which had gained currency is an un-Islamic way of address because people whom we call others are actually our brothers at least on two accounts: first, they are our countrymen and, second, they are our brothers on the basis of humanity, Maulana Rahmani said.

Joining from Blackburn, London, Mohammad Afzal Qasmi laid his focus on pluralism, basing his arguments on a Qur’anic verse. He said that Prophet Muhammad, who was forced out of his native place Makkah and migrated to Madina, had sent food and other necessary items to the people of Makkah when there was a famine. He also narrated a story of Umar, the second Caliph of Islam, who did not impose Islam even on an old lady stating that religion cannot be forced as it goes against the teachings of Islam.

Delegations from Gulf arrive in Kashmir for investment summit