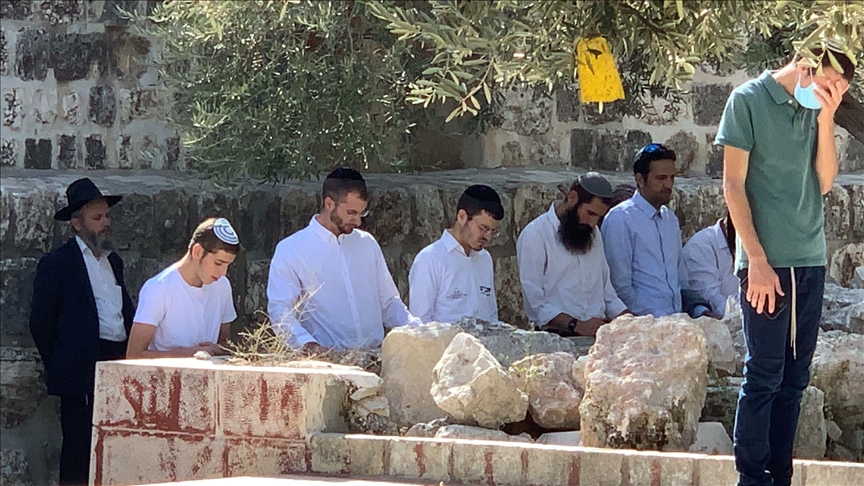 Witnesses told Anadolu Agency that Israeli police present at the scene did not stop the prayers.

The Islamic Endowment Department in Jerusalem said in a statement that “109 settlers stormed Al-Aqsa Mosque and were guarded by the Israeli police on Thursday.”

More settlers are expected to storm the mosque after the noon prayer.

An Israeli judge ruled in an unprecedented decision Wednesday that the “silent” prayers of Jews at Al-Aqsa Mosque complex in occupied East Jerusalem was not a “criminal act.”

Islamic authorities and officials in Jerusalem condemned the decision on Thursday.

The Council of Endowments, Islamic Affairs and Holy Sanctuaries, Supreme Islamic Council, Palestinian House of Fatwa, Court of the Chief Justice in Jerusalem, Islamic Endowment Department and Al-Aqsa Mosque Affairs said in a statement that “the decision of the Israeli court is invalid” and a “blatant violation of the Islamic and sanctity of the mosque and a clear provocation to the feelings of Muslims around the world.”

“There is no prayer for non-Muslims in Al-Aqsa Mosque, and no land law or court will apply to the mosque,” it said.

Israeli settlers usually storm the Al-Aqsa Mosque complex every morning and afternoon through the Al-Mughrabi Gate, southwest of the mosque.

Israel occupied East Jerusalem, where Al-Aqsa is located, during the 1967 Arab-Israeli War. It annexed the entire city in 1980, a move never recognized by the international community.-AA