Days after the administration cancelled her MPhil admission, Safoora Zargar, a researcher and prominent activist, has been prohibited from entering the university’s campus by Jamia Millia Islamia. In June 2020, Zargar was released on bail for humanitarian and medical reasons after serving time in prison under the Unlawful Activities (Prevention) Act in connection with an alleged conspiracy case involving the Delhi riots.

Following her dismissal from the university on August 19, Zargar and other Jamia students took part in demonstrations calling for her reinstatement and an extension on the due date for her thesis.

“It has been observed that Ms. Safoora Zargar (ex student) has been involved in organizing agitations, protests and marches on the campus against the irrelevant and objectionable issues to disturb the peaceful academic environment with few students who are mostly outsiders. She is instigating innocent students of the University and trying to use the University platform for her malafide political agenda alongwith some other students. Further, she is hampering the normal functioning of the institution. In view of above, the Competent Authority, for maintaining peaceful academic environment across the campus, has approved campus on ex-student Ms. Safoora Zargar with immediate effect,” the office order read.

In April 2020, Safoora Zargar was detained in connection with the riots in Delhi under the strict Unlawful Activities (Prevention) Act, or UAPA. Due to her pregnancy at the time, she was granted bail in June 2020 on a humanitarian basis. 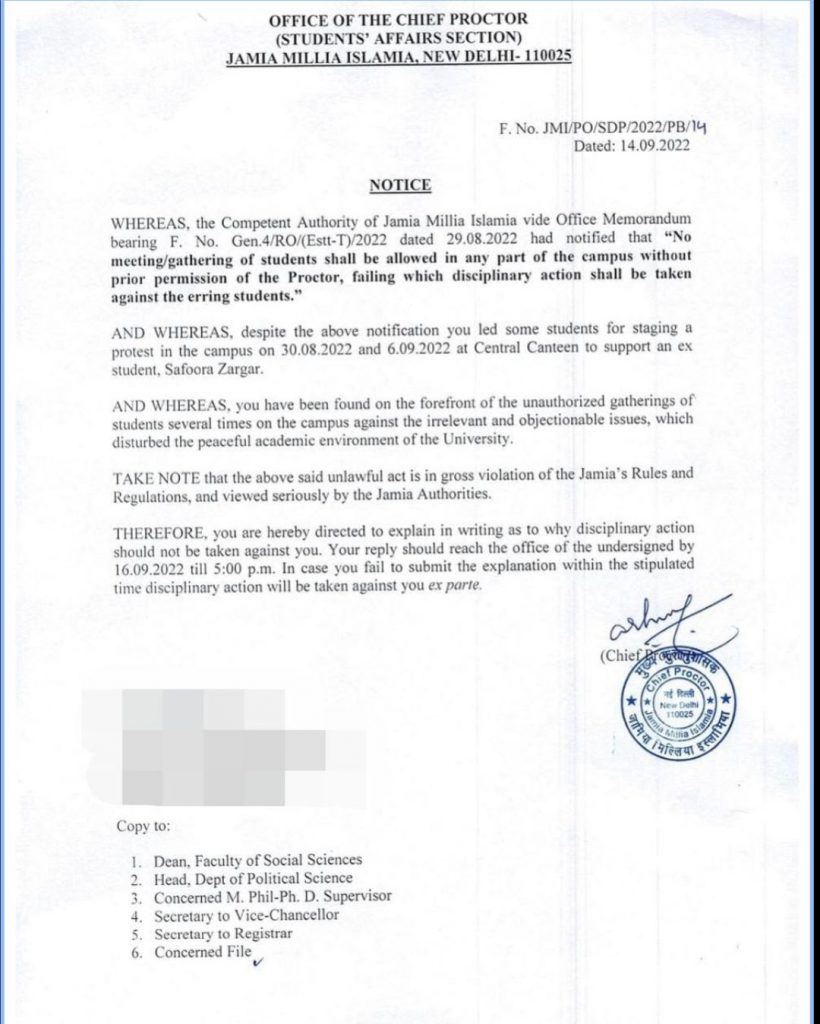 In a formal order, the university proctor declared that it was “a gross violation of Jamia’s rules and regulations, and viewed separately by the Jamia authorities” when other students joined protests in support of Zargar.