NEW DELHI — A protest march was carried out by the Jawaharlal Nehru University Students’ Union (JNUSU) inside the campus demanding reconstruction of the demolished Babri Masjid in Ayodhya.

The protest march was staged on Monday night to mark the demolition anniversary. The students gathered at a site holding placards, shouting slogans, and later they took out the march inside the campus. The student leaders also made speeches demanding reconstruction of the mosque.

The JNU administration had recently warned against holding the protest, but the student union still held the protest. On Sunday, the student wing also organised a show at the campus in which a movie based on the Babri Masjid demolition was shown. The admin had asked the students not to telecast any such film otherwise strict action would be taken.

The protest march, which was carried out on Monday evening, ended at the Chandrabhaga Hostel where the student leaders made speeches.

Saket Moon, vice president of the JNUSU said that with the reconstruction of the Babri Masjid justice will be delivered. 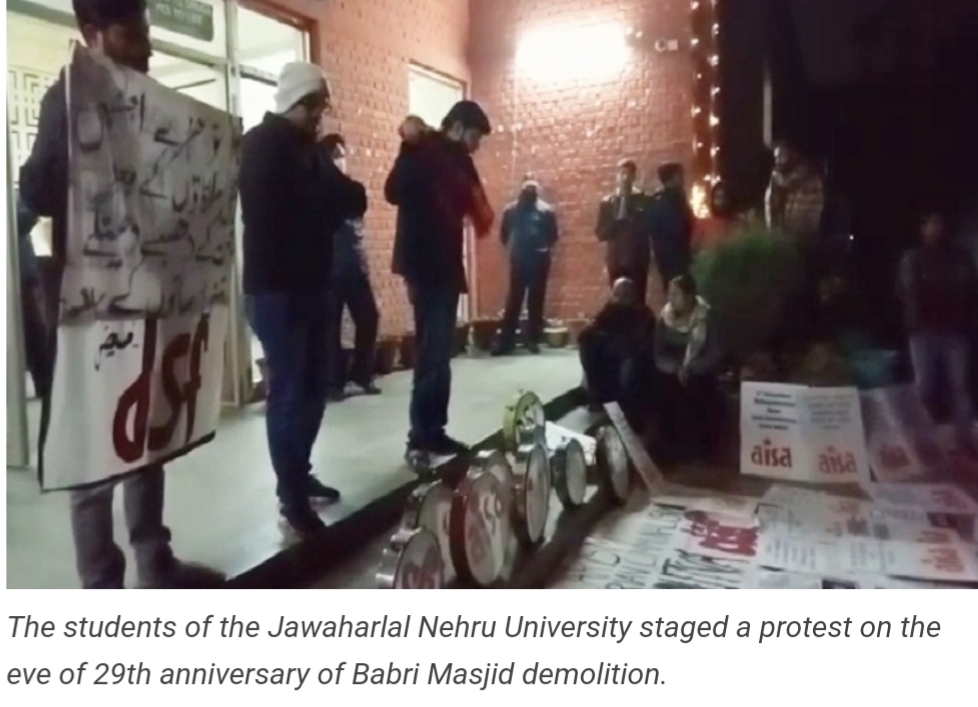 Aishe Ghosh, the JNUSU president said that after Babri Masjid, the next target of the BJP is Kashi and they (BJP) have started working on it.

“We are remembering Baba Saheb on this day. We are also condemning the killing of civilians in Nagaland. BJP and RSS haven’t done anything in the name of development, but they are dividing us in the name of religion, law and order is crippling,” she said.-IANS

Protest on the 30th anniversary Babri Masjid demolition, demand for justice to mosque will continue