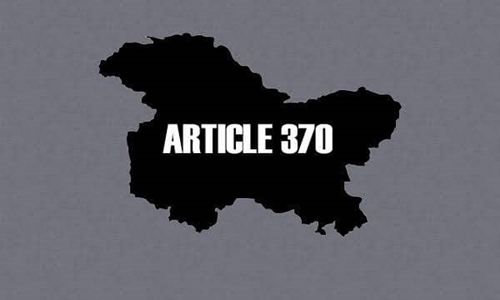 ” Whether you vanished ?or survived ?garlands replace the twisted wires and bullets fall, roses! Off me, and in my hands Without a thread of blood, thorns bury.“_ Agha Shahid Ali

The last Eid’s gift from New Delhi to Srinagar not only reaffirmed Akbar and Yusuf’s legend but also came out to be Pandora’s box minus hope. Modi’s gift was same in each and every aspect as it added an everest of grief in the niches that were laden with exasperations. The abrogation of article 370 was not only a morally corrupt mandate but in addition was also against ‘Quid Pro Quo’ the basis of contract. Which is a
matter of high concern. This legislation from the parliament further alienated them and now the feeling of being cheated, and anger for being betrayed is inside their blood and bones and the
only words that reverberate through their ears is, ‘self- determination’ and ‘freedom’.

The traces of this newly self created problem by India has its link in history. The new Delhi and Srinagar relationship as Kashmiris, say, decayed ages before during Akbar’s reign as he not only retracted from his promise but also banished their king Yusuf Shah chak, to which they drew parallels with what happened to Sheikh Abdullah. Although these adverse circumstances
didn’t make them despondent, like Habba Khatun waited for her King’s return they eagerly waited for their redemption. Unfortunately, this Yusuf didn’t returned so has their redemption not yet arrived and the current upbringings have make the lose heart, in words of Charles pegury,” the modern world has succeeded in debasing what is perhaps the most difficult thing in the world to debase, because the thing has in it as if in its very future a particular kind of dignity a singular in capacity to be debased it debases death.” And so has been happening with Kashmir
all these years.

Before the rescinding of article 370, considered by the right wing as the magnum opus of the BJP led government, Kashmir enjoyed its statehood status with a considerable GDP growth rate fluctuating between 17.7% to 3.13% at USD 49.51 million. Had sex ratio of 889 far greater than BJP ruled Haryana and Union territory of Andaman and Nicobar and performed splendid in educating it’s future inspite of the adversities faced by them which averages to 63%. And yes, it true land was not a property to be purchased, even though it was available on lease for 99 years.the transformed landscape of Kathua is a great example where big industrialists like Goenka have invested.

All this was before 5 August, when it was considered to be lacking in development at par with other states. Moreover, when people living in the lap of Himalayas still had hope.
Why don’t you seek me out?
Why are you cross with me? the shock of your desertion has come as a blow to me, o cruel one I continue to nurse the pain of Habba Khatun.

But now, things are going through metamorphosis due to the opening of Pandora’s box which the media calls normalcy. And as sadness, mourning and grief started escaping through the box, the first one in the long queue came out was captivity.

Though it was nothing new there were ready 11 military personnel per person in Kashmir and hard calm down on dissent through a structured system already persistent. This time it severed, for months there are no scenes on infamous Lal chowk and zero bridge.
on the midnight of 4th August internet was barred, the 4G hasn’t been restored yet. All the leaders and politicians for the first time were formally or informally detained,and people were
even lied to about the detaintion Saifuddin Soz, Sajjad Mir are a few examples to be quoted in   this regard.
If this is the condition of the leaders, God forbid what they would have done with the residents. This prolonged lockdown made the way for second one, economic crisis, in just a quarter the
heaven lost 17,878 crore as calculated by Kashmir Chamber of Commerce and industry with this showed up his twin job Crisis, tourism industry, travelling industry, artefact industry all have
collapsed, nothing besides remain, this crisis has alo made financial institutions incapable.

But these were the minor ones, major one still awaits, namely domicile laws, completely painted in communal colours, which segregates Muslims and non-Muslims aimed at changing the
demography of the state, if not why there isn’t any new domicile law, or same been applied to UT of ladakh which along with UT of J and K came into being on 31st October. But the most heartbreaking was the curriculum that changed provisions related to land rights, making it easier for armed forces to acquire more of their land without any local government permission, leaving civilians apart.

These weren’t enough to make the life as miserable as hell,but something more were required as bonus which curtailment to freedom of press provided as result any information which government doesn’t want the world to know about is labelled as a threat to integrity of India, what happened with Masrat Zahra and two others must be known and why journalist there got Pulitzer is something we should try to explore.
” At night’s Sun there in Srinagar, dance shoot stars in the sky, the storm of constellations night after night, The infinite that rages on. It was Eid ul zuha: a record of gods inability,” Towords of Agha makes me lament, for what a wavy announcement new delhi made on Aug 5 just before the Eid, profoundly with all the pride collected in the forefront of their mouth stated, that this will help make investment in Kashmir easier and will reduce militancy. So far so good, nothing seems to be true as no militancy has stopped and no investment after abrogation of 370 has arrived in this part of India, while what was already their is being lost at a great speed, as on 13 may 2020 in the village of Budgam a gunfight took place and its dire consequences were met by civilians whole village was destroyed and they call it peace “sequestering homes designed as peace.”

In the first six months of 2020 nearly 2 dozen houses were reduced to rubbles, people were left stranded, completely violative of 300(A ) of Indian constitution which the Supreme court itself says is a basic Human right(right to property).

The prolonged paramilitary rule in the valley has also culminated into psychological breakdown of common folk, leaving them into numerous mental traumas , having so abject an impact on them that some shall have accustomed to even checking their rooms before actually checking it in.

The law body of the country is staving the issue ever since the autonomous right of the valley is annulled while the rest of the country keeps its mum while heaven is being turned into hell. Remember your silence is the consent, but who dares to speak when all is done in the name of nation and nationalism,which for Rabindranath Tagore is a machine, an organisation
working for greed, indifferent to human sympathy and is selfish.

(But they cannot destroy everything till the ruins too are destroyed. Like the tomb razed to earth but still intact with epitaph king of Kashmir, Yusuf Shah Chak)???