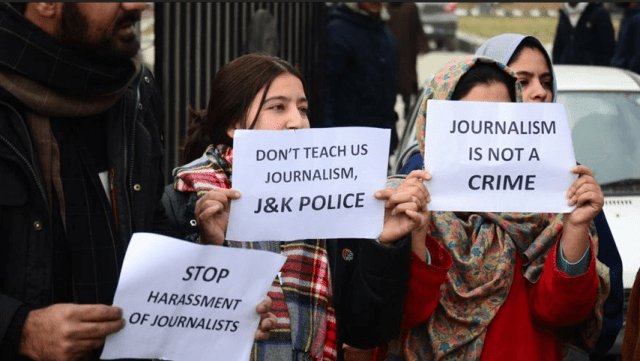 The regional administration of Indian-run Kashmir on Monday sealed the office of Kashmir Times – one of the oldest dailies in the region – with the newspaper owner calling it a “vendetta for speaking out”.

The office located in the Srinagar city’s Press Enclave area was sealed by the government’s Estates Department officials. The space was allotted to them in the early 1990s.

Anuradha Bhasin, the executive editor of the newspaper, said that the authorities did not follow the due process.

“No notice was given to us,” she said. “They [estates department officials] just came. Our staff was working in the office. They asked the staff to come out, saying they were putting a lock.”

Speaking to Al Jazeera she said that the government was pursuing a vendetta she went to court against the communication blockade last year. “Right from that very day, government advertisements to Kashmir Times was stopped. It has been going on since then,” Bhasin said.

India’s Hindu right-wing government on 5 August 2019 had revoked the special status of Jammu and Kashmir and divided the only Muslim-majority state into two federally-administered territories. To suppress protests, the government had imposed a complete shutdown and blocked all sources of virtual communication for months.

“It [sealing of her office] is an attempt to gag me. It’s an attempt to suppress me. They can put locks on our office but they can’t put it on our voice.”

On October 15, Kashmir News Service (KNS), a local news agency, was also told to vacate their offices in Srinagar by the authorities.

Earlier this year, several leading Kashmiri journalists were charged by the Indian police under stringent laws for their “anti-national” social media posts – a move slammed by press and rights groups from around the world.

The sealing of the office of the Times of Kashmir has been condemned by several politicians, freedom activists and groups.

Media watchdog, the Committee to Protect Journalists (CPJ) said, “We condemn the ongoing targeting and harassment of Anuradha Bhasin and Kashmir Times. Authorities must stop trying to silence independent and critical voices and should respect press freedom,” CPJ said in a statement.

The former chief ministers of the region, Omar Abdullah and Mehbooba Mufti, condemned the government’s action and expressed their solidarity with Bhasin.