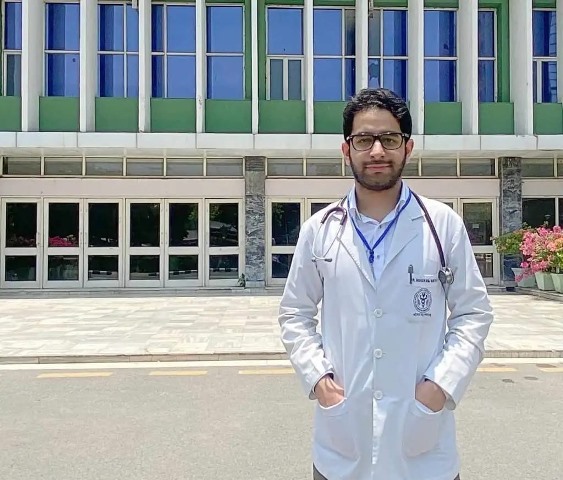 New Delhi: A 27-year-old doctor from Indian-administered Kashmir has topped all three national-level Super Speciality examinations in AIIMS, NEET and PGI. The exemplary success of Mohsin Raj Mantoo, who is a resident of Dooru area of Anantnag district, has left many amazed.

“My MD finished in July, 2020. After a brief preparation period of three months, I appeared in Super Speciality exams in NEET, AIIMS and PGI. My choice for Super Speciality was Cardiology,” said Mohsin while speaking to FREEPRESSKASHMIR.

He believes that securing highest marks in the aforementioned exams was much difficult for him.”My goal has always been to be in the top institutes of India and I have succeeded in that. Though it was not difficult, there is always an anxiety whether you will succeed or not,” he told Rising Kashmir.

Until 10th, Mohsin studied in a private school in his vicinity. He passed his 10+2 from Iqbal Memorial Institute Anantnag and topped his batch.

Following his childhood dream of becoming a doctor, he did his MBBS from Government Medical College Srinagar in 2010 where he also topped his batch.

He then moved to AIIMS in 2017, where he did his MD in paediatrics.

“The goal of moving to AIIMS and doing these Super Speciality courses at AIIMS, PGI takes hard work and extraordinary efforts. This is the toughest competition,” he said.

After the success in the three examinations, he has chosen DM cardiology at AIIMS New Delhi.

He credits his parents and wife for his achievements.

“My father and mother have always been supportive and encouraging of my career choices. Besides, my wife, who is also a doctor has been my push factor. It’s the support of each other which keeps us going,” he said.