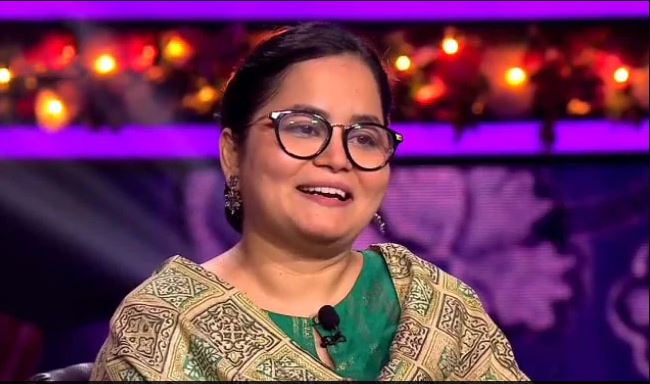 New Delhi: Delhi-based Nazia Nasim is the first crorepati of Amitabh Bachchan-hosted show Kaun Banega Crorepati 12. She is grateful to her progressive Muslim family who brought her up with strong values and showed how a husband and wife should collaborate to run a successful family.

KBC has been her mother’s dream, says Nazia.

“She has been the force behind and encouraging me to do greater things in life. I almost attempted eight to 10 times (to participate in KBC). The year 2020 has been lucky and this was my year for sure,” Nazia told IANS after winning a crore on the quiz show.

Her mother Bushra runs a boutique in Ranchi, where she was raised.

“She (mom) has been successfully running it for the last 28 years, when it was not in fashion for women to sit in a shop. She has been breaking taboos much before we could have ever imagined. She runs a boutique even now in Ranchi,” said the proud daughter.

It’s not just her mom but also her dad, Mohammed Shakeel, who raised her and her sister and brother as equals.

“We were not raised by people constantly telling us, ‘you are a girl, you need to behave in a particular way’. That barrier was broken for us early on. We were given the freedom to study, make friends and make our own decisions. That really helped us,” she said.

“Certain rules were set in the house in terms of equality. Even though my father was an early bread winner, my mother was no less important. They took collective decisions for the family. I think that really helped us to set a strong image of how a family should be and how husband and wife should collaborate to run a successful family,” she added.

Her mother got married when she was only 15 or 16.

“She did most of her education after getting married, while raising three children. All that has really inspired me. Nothing is a barrier, it’s just a mental block you think you can’t overcome,” said Nazia.

Even though she and her siblings were given the same treatment by their parents, the same can’t be said about her neighbours.

“I used to live in a very conservative mohalla in Ranchi. It is a locality called Doranda. It is a typical concentrated Muslim mohalla. I had seen men who used to behave as if they were a superior lot. So, women like my mother were outcasts.

“Early on, my sister and I used to wear western clothes. It wouldn’t go down well with these people. Even riding a cycle was a taboo. My mom was taunted a number of times for letting us ride cycles. It was ridiculous,” recalled Nazia.

But she believes that male patriarchy is more than about the religion one follows. “This happens across religions. I want to give more courage to women across religions because I believe that my community is the woman community. I don’t believe that my community is the Muslim community. I am a woman first, and I will champion their rights irrespective of religion and caste,” said the 39-year-old, who did a PR and Advertising course from Indian Institute of Mass Communication, Delhi.

As of now, she wants to use the winning amount for her son’s future and parents’ health.

“I am planning to use some amount for charity too. I haven’t decided yet. I will pick up something that’s close to my heart like girls education or sanitation,” she said.