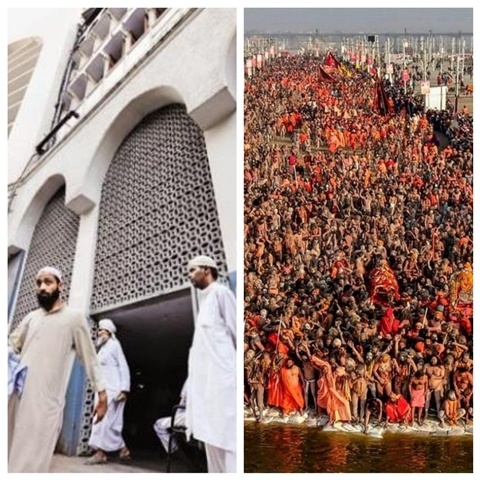 New Delhi: Amid the raging of COVID-19 pandemic, the ongoing Kumbh Mela in Haridwar, Uttarakhand  has come under sharp scrutiny and a comparison  is being made  between  Kumbh Mela and  the last year’s Tablighi Jamaat congregation  held  at its headquarters , Markaz Nizamuddin  here.  That shows the stark discriminatory approach of the Union and state governments as far both the events are concerned.

A section of  media taking note of this discriminatory attitude of the present regime. Writing in the Quint, Karan Tripathi said the Tablighis were criminalised,  while devotees are thronging  Kumbh Mela during the highest COVID surge with full impunity.

Terming it the politics of selective covid-19 policing, the author recalls  that on 2 April 2020, the Ministry of Home Affairs unilaterally blacklisted 950 foreign nationals for their alleged involvement in the “Tablighi event”. In March 2020, adherents of the sect from about 70 countries attended a Jamaat congregation at its Markaz in Delhi’s Nizamuddin.  The event took place weeks before the promulgation of COVID-19 guidelines prohibiting social and religious gatherings.

The central government also issued a direction to Delhi’s Director General (Police) to register criminal cases against such foreign nationals under the Indian Penal Code, the Foreigners Act and the Disaster Management Act. The police departments in other states were also directed to take similar actions against foreign nationals related to the Tablighi Jamaat event.

Now a year later, even as  the country witnesses its highest surge in COVID-19 since the onset of the pandemic, visuals have surfaced of lakhs of Hindu devotees crowding in Haridwar, Uttarakhand, for Kumbh Mela, ignoring the most basic of COVID-19 protocols. However, this time, the central government has chosen to turn a blind eye.

“While the Tablighis were criminalised, Kumbh Mela devotees are being celebrated. This exposes the politics of selective COVID policing, which allows differential treatment of different classes and communities under regulations which are, in fact, religion-neutral on paper”.

As per The Quint’s research, a total of 1,086 people related to Jamaat have been exonerated by courts across the country.

While acquitting the Tablighis, the courts have criticised the police’s punitive actions by using terms such as “malicious prosecution”, “abuse of process”, “virtual prosecution”, and “made scapegoats by a political government.”

On 16 December 2020, a Delhi Court acquitted 38 foreign nationals related to Tablighi Jamaat by noting that there was not even an iota of evidence against them. The court further said:

“It’s reasonably possible that none of them were present at Markaz during the relevant period and they had been picked up from different places so as to maliciously prosecute them… there’s no iota of evidence on record to suggest that the order promulgated under section 144 of IPC was brought to the notice of persons staying at Markaz.”

The visuals from Kumbh Mela in Haridwar are not from a pre-pandemic era. Rather, they capture the entitlement of certain citizens who think they can violate COVID-19 guidelines with complete impunity, that too during the highest surge of cases in the country.

The entitlement of the devotees stems from the “free-hand” given to them by the BJP government in Uttarakhand. When asked about the scare of holding Kumbh Mela during these times, Chief Minister Tirath Singh Rawat said one cannot compare the ongoing Kumbh Mela, which is in an open place, to the Nizamuddin Markaz, an enclosed space that has annual foreign visitors.

By claiming that “health is a priority, but matters of faith cannot be ignored,” Rawat has tried to give the discrimination a medical rationale.

Alongside, Rawat also gave the comparison between Tablighi and Kumbh Mela events an “Us” versus “Them” turn, by positioning devotees attending the Kumbh, some of whom may even be foreign nationals, as “not from outside” but “our own people.”

The chief minister seems to be unaware of the fact that the FIRs for the Tablighi event were not only registered against foreign nationals but also against Indians who provided shelter to those foreign nationals who were left stranded in India after the travel ban was announced without any prior warning.

Tripathi further underlines that the differential treatment between Tablighi Jamaat and Kumbh Mela throws light on how the central government uses neutral regulations to perpetuate a politics of exclusion.

“While the COVID guidelines and the criminal sanctions attached to violating them are religion-neutral, their selective enforcement by the central government exposes the vulnerability of these regulations to the politics of hate, he concludes.

On April 12, the Delhi High Court pulls up the central government for putting  selective restrictions on Nizamuddin Markaz. The Court observed that:

“A 200-people list is not acceptable; that cannot be. Yes, you will measure the exact area of the mosque, how much it is and tell me. As per social distancing norms, how many people can come in that mosque, we will permit only that many people at a time.”

However, the government’s politics of exclusion did not stop there. A day after the high court’s direction, the central government informed the court that no religious congregation can take place at Nizamuddin Markaz as the same has been prohibited by the Delhi Disaster Management Association since 10 April.

It must be highlighted that, unlike other states, the DDMA is headed by the Lieutenant Governor instead of the state’s chief minister. This gives the central government direct control over the implementation of the Disaster Management Act in Delhi.

Responding to the central government’s submission, Senior Advocate Ramesh Gupta appearing on behalf of the Waqf Board submitted that he can produce photos of people queuing up outside Karol Bagh’s Hanuman Mandir flouting the social distancing rule.

Citing the example of Kumbh Mela, Gupta asked the court as to why the COVID rules are not applied in Haridwar and are only enforced against Muslims. As the court awaits the central government’s status report on this issue, the politics of selective COVID policing has already surfaced before the court. How the judiciary reacts to such blatant violation of religion-based discrimination is waited to be seen.