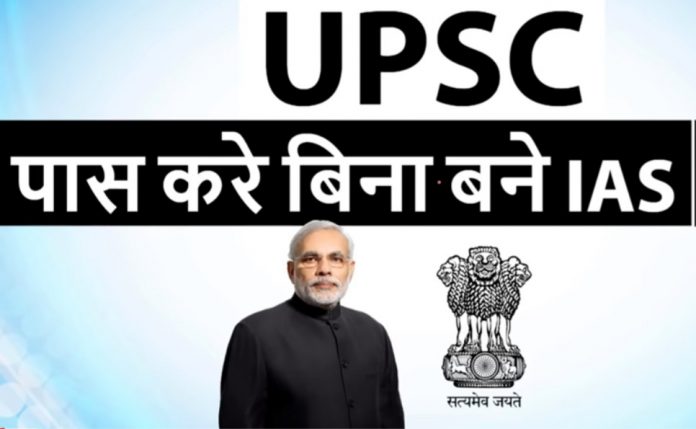 New Delhi:  The Modi government’s decision of appointing 31 private individuals through ‘lateral entry’ in the top posts of civil services on October 8 has enraged the backward community leaders. Demanding its roll back, they described the move as ‘the BJP-RSS grand design to annihilate diversity in all spaces in order to ensure the hegemonic dominance of their regressive idea of Hindutva” and a brazen attempt to reduce the strength of Scheduled Castes, Scheduled Tribes and OBCs in the bureaucracy.

The appointments came just two days after the Supreme Court had taken note of the lower presence of SCs and STs in government jobs.

The main opposition also sees it is a part of a larger “ill-willed scheme of BJP-RSS duo which wants to capture all institutions – especially the leadership positions and wish to annihilate diversity in all spaces to ensure the hegemonic dominance of their regressive idea of Hindutva”.

He said this “BJP/RSS” regime continuously appoints people through lateral entry because of three main reasons and to do away with the affirmative action measures provided by the Constitution of India.

“Firstly, the reservation policy does not apply to lateral entry recruitments.

Secondly, directly recruiting private experts on the top positions in the Central Ministries drastically reduces chances of people belonging to SC and ST categories of getting a promotion or occupying a leadership position.

Recruiting  31 individuals, none from the  SCs, STs and OBCs, speaks volumes about Prime Minister Narendra Modi’s distrust in the people who are already working in these Ministries and his willingness towards the systematic recruitment process that ensures implementation of reservation policy in India, he added.

It’s a backdoor attempt to increase the representation of upper caste members in the bureaucracy who are already dominated in all departments of the government, Ansari told Muslim Mirror.

Retired bureaucrat from a backward community,  who does not want to reveal his identity, said  RSS always opposed the idea of affirmative actions,  and its leaders time and again vent their antagonism towards  reservation policy.   Reminding RSS chief’s anti-reservation remarks, he apprehends that “lateral entry’ will be used as a handy tool to do away reservation at least in the top government positions.

It is to be noted that despite reservations, the full quota of SC, ST and OBC are not filled in the government services and their backlog is multiplying and some privileged born classes who just account below 15 percent but occupying a major share in the jobs, the OBC leader from Maharashtra said and added that this fact can be vouched from the government data.

The representation of SC, ST and OBC Officers in the Central Ministries is extremely unbalanced at the Additional Secretary, Joint Secretary and Director Level for which these 31 appointments have been undertaken through lateral entry. According to the data released by the Department of Personnel & Training (DoPT), out of 93 Additional Secretaries in Central Ministries, just 6 (6.4%) were from the SC category, and 5 (5.37%) were from the ST category.

At the same time, there were no OBC Additional Secretaries. Whereas, among the 275 Joint Secretaries, 13 (4.73%) were SCs, 9 (3.27%) were STs, and 19 (6.9%) were from the OBC category. We have seen over the decades that officers belonging to SC/ST categories are targeted and not allowed to get promoted and reach at the top positions. Hence there is a strong need to robustly implement reservations in promotions in the government sector.

In Addition to the representation at the top level positions, SC/STs are facing many challenges as well.

On one hand PM Modi is filling the top-level positions through lateral entry and on the other, the backlog of SC/ST list vacancies in Central Ministries has doubled under his regime in the last four years,  Dr Raut pointed out.

The data also disclosed that more than 50% of positions in the SC/ST category were lying vacant in 2019. There were 13,979 filled and 14,366 unfilled positions out of 28,345 positions in just the SC category. Recently, in a written reply presented before Lok Sabha, the Minister of State (MoS) shared data on the backlog of reserved vacancies on 1st January 2020. It revealed that over 42,000 positions reserved for the SCs, STs, and OBCs were vacant in various Central Ministries.

Also, a parliamentary standing committee had stated in its report released earlier this year that the backlog of vacancies for SCs and STs is multiplying.

Congress leader  Raut said instead of taking cognizance of this issue and planning a targeted intervention to fill these backlog vacancies,  the PM  is running in the opposite direction altogether.

He also hit out at PM Modi for selling off all national assets and public sector undertakings. Once all profit making public sectors get privatized, the PM  will not have to worry about implementing reservation policy in India as it doesn’t extend to the private sectors, be it railways recruitments, admissions in higher educational institutions or in any other sectors, he underlined.

Dr Raut warned that   people should not see these lateral entries in isolation as this action is a part of a larger ill-willed scheme of the BJP-RSS duo.