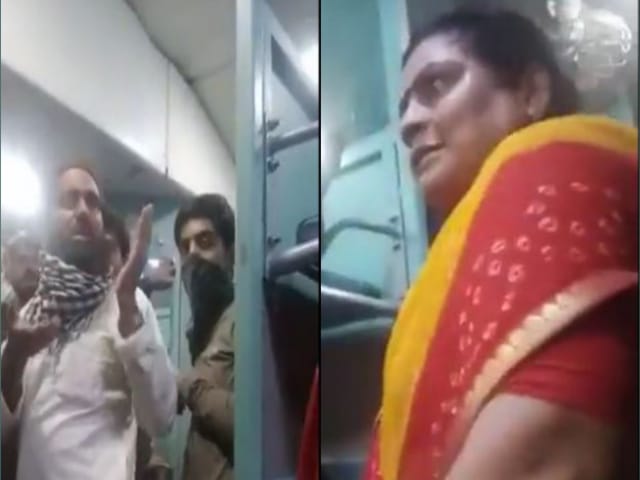 Madhu Sharma, known as Maa Madhura beat a bearded Muslim man and made him touch her feet for allegedly pushing her while passing through the railway coach gallery.

Sharma is a disciple of far-right priest Yati Narsinghanand Saraswati. She has also been seen with several BJP leaders like Kapil Mishra, Suraj Pal Amu and Ashwini Upadhyay.

A video of the incident was shared by Sharma on her Facebook page on October 18 (Monday). The video caption reads, “Friends, this is your Maa Madhura, thrashing a Jihadi snake because he had hit my shoulder while passing through the gallery. So, he had to face the consequences!”

In the 41-second video, Sharma slapped the Muslim man over a dozen times and forced him to wear the skull cap while filming the act. She pulled the Muslim man by his hair and threatened to kill him while forcefully asking him to touch her feet. “I will kill you. Touch my feet,” the woman is heard telling the Muslim man.

The only sentence that the Muslim man is heard saying is, “Maine to dekha bhi nahi. (I didn’t even notice.)”

#MaaMadhura a woman said to be follower of hate preacher #Narsinghanand brutally assaulted and humiliated a bearded Muslim on train after he allegedly pushed her. pic.twitter.com/ynuuS1wmkl

The video was shared and glorified on Twitter too by a large number of right-wing influencers.

It is due to this celebration of violence against Muslims that Genocide Watch founder Dr Gregory Stanton, in 2019, had indicated that India is headed for anti-Muslim genocide. According to him, the persecution of Muslims in Assam and Kashmir “is the stage just before genocide”.