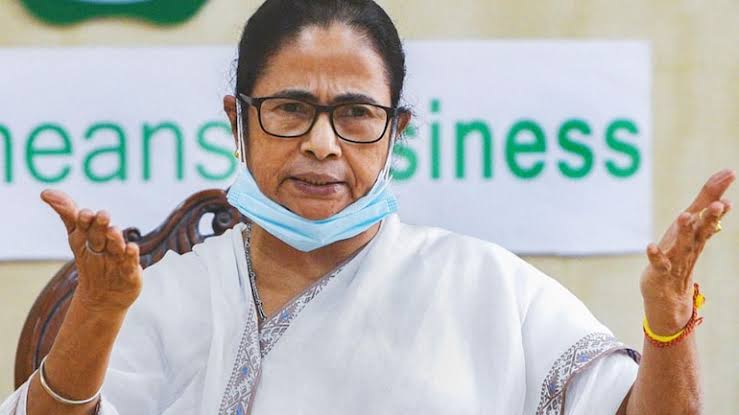 West Bengal Chief Minister Mamata Banerjee, who attended a meeting of the district magistrates with the Prime Minister where some chief ministers were also present regarding the Covid situation, alleged that the chief ministers were not allowed to speak and they were reduced to puppets. She said the meeting was a ‘super flop’.

Addressing the media after PM Narendra Modi’s meeting with the district magistrates of 10 states on Thursday, which was also attended by some chief ministers, Mamata Banerjee said, “It was so unfortunate that after inviting the CMs, he did not talk to us. We were not allowed to speak.”

Mamata Banerjee added, “Only some BJP chief ministers and the PM made small speeches and ended the meeting after this. It was a casual meeting.”

“We feel insulted and humiliated. This is an attempt to bulldoze the federal structure of the country. PM Modi is so insecure that he did not listen to us,” Banerjee told reporters at the state secretariat Nabanna.

She said the Prime Minister neither asked how West Bengal is handling the Covid situation nor did he enquire about the stock of vaccines or oxygen.

“There was not a single question from the PM about the ‘black fungus’,” she said, adding that four such cases have been detected in the state.

She attacked Modi for saying that fresh Covid-19 cases are declining. “PM claimed that coronavirus is decreasing. This claim was made previously as well, which led to a further increase in cases. PM Modi is so insecure that he did not listen to us,” said Banerjee.

On the same day the chief minister wrote a letter to the Prime Minister urging him to make arrangements for vaccines for the extended frontline workers of the state. “In Bengal, while we have taken steps to complete vaccination of a large section of frontline and electorally engaged employees across several sectors, we still need at least 20 lakh doses to cover all the employees. We would request you to kindly make available an adequate number of vaccines to all the state governments so that they are able to cover all their employees without any further delay,” she wrote.

“Moreover, I would also like to bring to your kind attention the problems being faced by the Central Government employees like those working in Railways, Airports, Ports, Defence, Banks, Insurance, Post & Telegraph, Coal and similar other sectors having wide-scale public interface, in getting vaccinated on priority basis,” she added.

“The railway employees, the employees working in the airports and the ports etc. are working to keep essential activities uninterrupted. Similar is the position of employees of Banks, Insurance, Post & Telegraphs, Defence, Coal, etc. They have been forced to face people, to mingle with the public for discharge of their duties. In the process, they are running the risk of being affected by Covid-19. It is important that they are vaccinated without delay, irrespective of age groups,” she wrote.

Meanwhile, a Union health ministry statement said that West Bengal and the eight states of the Northeast are recording a higher rate in the number of daily Covid cases, high mortality and increasing positivity rate.