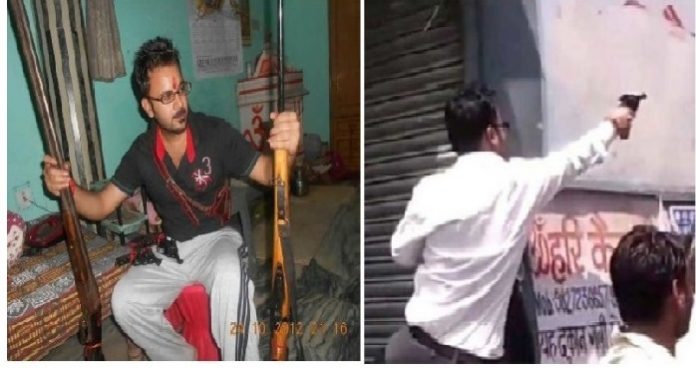 Gwalior: Raja Chauhan, a man captured on camera firing at the people during the Dalits protest in Madhya Pradesh’s Gwalior city turned out to be a Bharatiya Janata Party (BJP) worker.

A case has been registered against him for firing during protests against the alleged dilution of the SC/ST (Prevention of Atrocities) Act.

Images of Chauhan firing at the crowds from his firearm had gone viral on social media and also various news channels aired the footage.

Chauhan was allegedly captured in camera for firing at the people during the protest here. After the news spread, he deleted his Facebook account.

The death toll in Madhya Pradesh due to the violent protests, during the nationwide bandh called by several Dalit organisations against the alleged dilution of the SC/ST (Prevention of Atrocities) Act, has reached seven after one more person succumbed to his injuries.

Protests across the country turned violent on Monday after protesters resorted to stone pelting, damaging public properties and rail and various other blockades.

The apex court had, on March 20, introduced the provision of anticipatory bail in the SC/ST Prevention of Atrocities Act while directing that there would be no automatic arrest on any complaint filed under the law.

The Centre on Monday filed a review petition in the apex court to reconsider its order.With ANI inputs