Born in a humble family, Anil Kumar Chauhan has attained popularity not just in Hyderabad, where he resides but also in other places in India and even abroad because of his calligraphy in Arabic.

Kumar’s grandfather and father both used to paint signboards, and that he has now followed in their footsteps. He started by painting signboards, and because he lived in the old city, the signboards were primarily in Urdu, which Anil Kumar could not understand, he relied on an older gentleman to write it down for him on paper, which he carefully copied onto the signboards. He, gradually, developed an interest in learning the language and became perfect in it.

After painting many signboards, Anil Kumar, who has a commercial painting diploma from Vivek Vardhini, was given his first job to paint verses from the Holy Quran in a Masjid in the old city 20 years ago. For the first time, he penned the Kalma Tayyib- first among the six Islamic phrases often recited by South Asian Muslims.

Even though he did not know Arabic, he taught himself Arabic calligraphy.

“I can also read Arabic by identifying the alphabets which are similar to Urdu with the help of the harakat ( zer, zabar, pesh),” shared Anil Kumar in his pure Urdu diction. 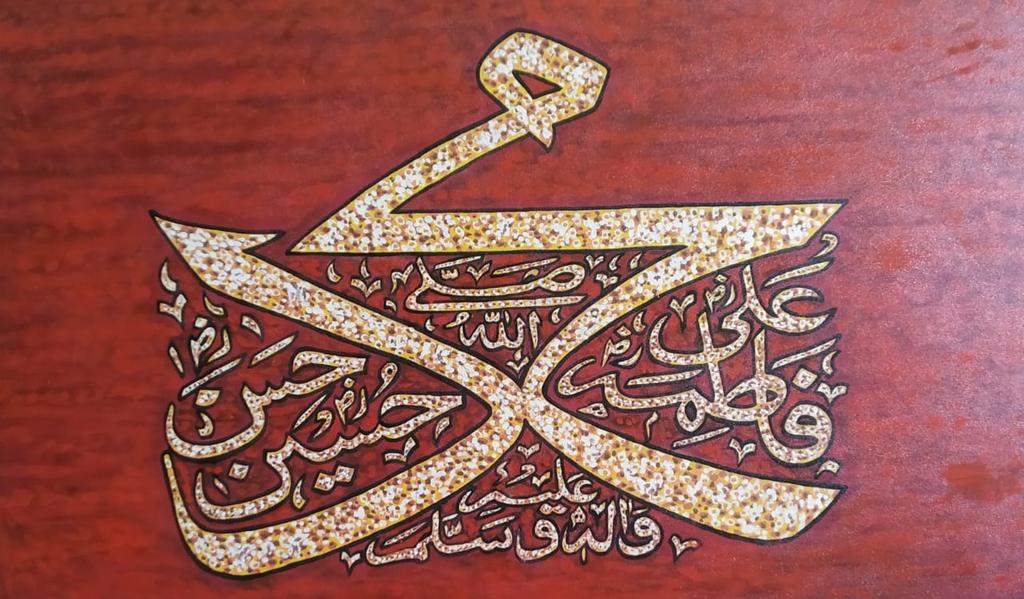 Proposals began to pour in from other Masjids to write the ayats (verses) on the walls of the city’s masjids. He learned not only calligraphy but also how to read and recite the naath e kalaam–poetry in praise of the Islamic prophet, Muhammad– without ever visiting an Islamic institution.

Anil Kumar has worked in over 200 masjids to date, decorating the walls with Quranic passages written in exquisite calligraphy. He claims that he has not asked for any payment from at least a hundred mosques, but that he has received letters of gratitude for his efforts.

Though no one in his community opposed him writing Quranic verses in mosques, a few Muslims did; Anil Kumar obtained a fatwa (decree) from Jamia Nizamia University, which effectively silenced his detractors.

Today, Muslims admire him for his efforts and see him as a special person.

“Many people ask me to make dua for them. They feel my work in the mosque has earned me that status. And I am humbled with all this appreciation and love,” he said.

The Jamia Nizamia University has a huge board with Surah Yaseen written on it by Anil Kumar adorning its corridor. 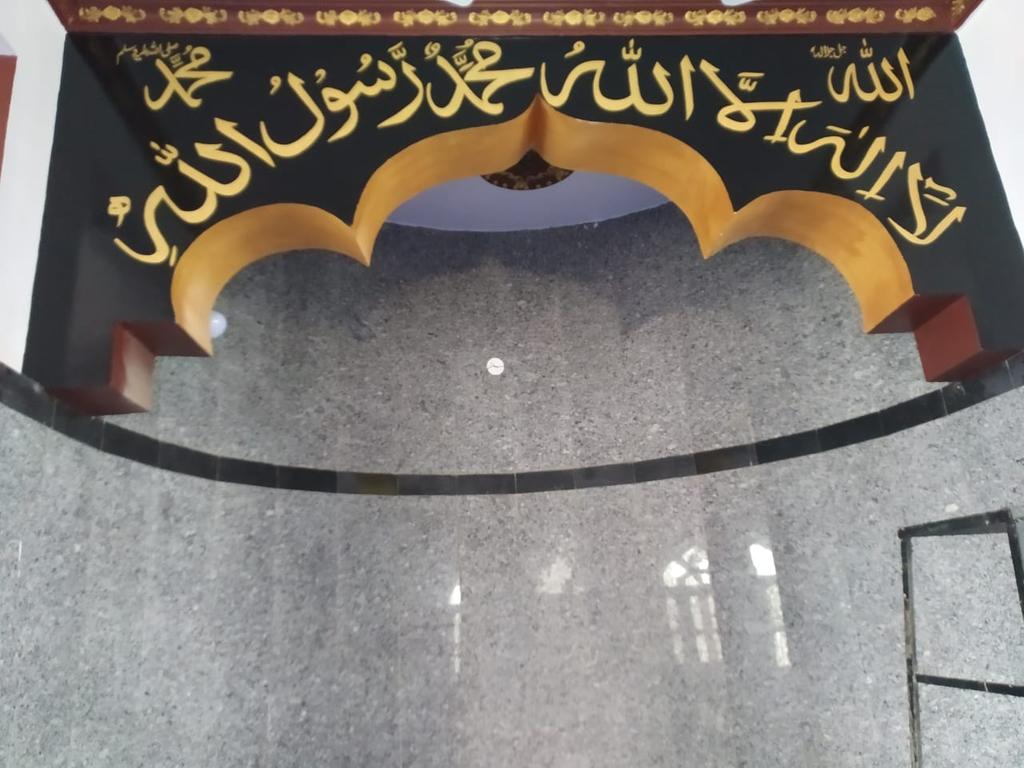 Kumar has written the Kalima Tayyib, Surah Yaseen, names of the Khulfa Rashedin ( Caliphs of Ialam), Ayat ul Kursi and several verses of the Quran, each superior to the last.

He had also enrolled himself in the SV College of Fine Arts at Hi-Tech City, Hyderabad for a 3-year diploma, but after a year, he could not continue due to financial constraints.

People even invite him to Mehifls to recite the naat (poetry in praise of Prophet Muhammed ﷺ) where he has gained popularity. People just can’t stop being in awe of his voice and the way he recites the naat better than most Muslims.

He has been employed by two mosques in Secunderabad to write Hadees (Sayings of Prophet Mohammad) on the black board of the masjid once a week. 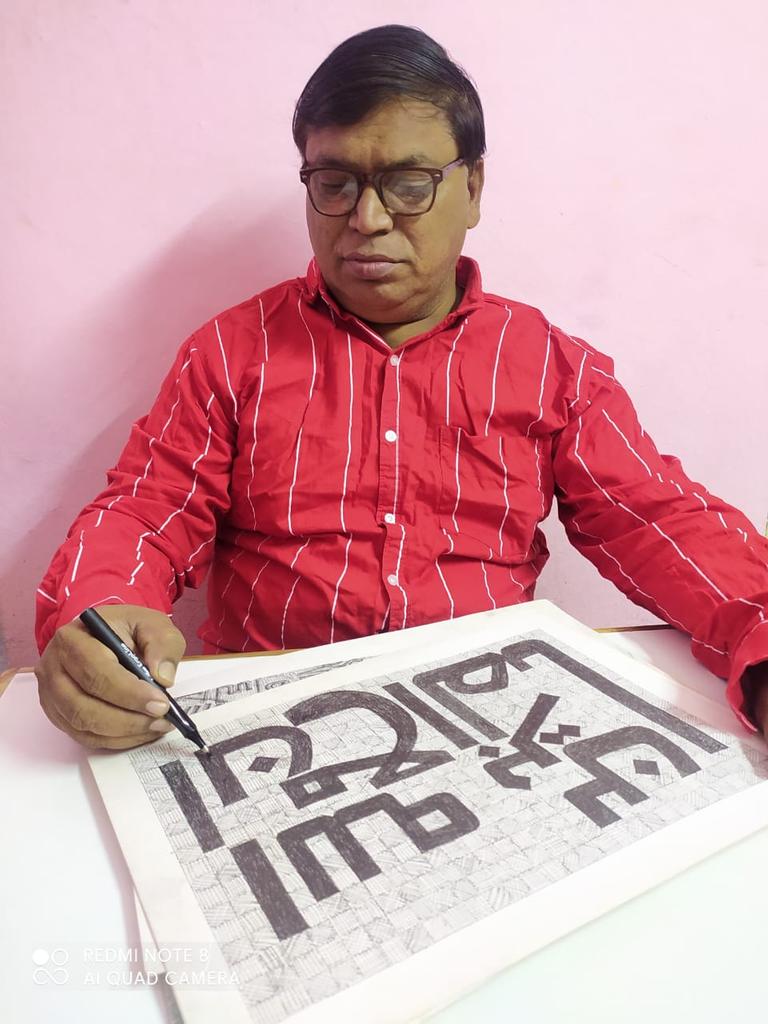 Anil Kumar has given several interviews for several television channels, print media all over India, and last month he even gave an interview to a Pakistani channel via video conferencing platfrom Zoom. Kumar has not let this publicity and appreciation get to his head, he remains ever humble and friendly.

He has several interesting experiences to share through his work in the Masjids. Some of his experiences have been spiritual. Kumar shared two of his memorable experiences with Muslim Mirror which he says are miracles as he felt a divine presence.

Anil Kumar said during the month of Ramzan after the night prayers when almost everyone had left the mosque, he was painting some verses from the Holy Quran, he was tired and was feeling drowsy and soon fell asleep standing on the high stool with the brush in his hand. He said when he woke up after more than an hour, he saw the verses were already painted.

Another experience was harrowing as he said escaped a fall. After finishing his calligraphic work in a mosque he climbed down the wooden ladder. No sooner did he step down the last run, the entire ladder collapsed and fell in a heap.
“It was as if the ladder was waiting for me to finish my work so it could break. It all happened within a fraction of a second, I was dumbstruck,” shared Anil Kumar. “Such incidents where I can feel some kind of divine presence around me happen, and I realize I am fortunate to experience this. Even God is pleased with my work,” he told Muslim Mirror.

However, his children have not taken up painting or calligraphy. His younger brother assists him. His children are both graduates and are employed in the private sector. “Calligraphy is dying. And the very few people who know it do not have much job opportunities. I feel sad about it,” he said.

Through his work, he may not have earned huge amounts of money but he has earned a lot of love and respect from a lot of people. He is happy with that. He has lived all his life in the old city of Hyderabad and moves about with Muslims, working in mosques and singing naats.

His favourite naat is by Azam Chisti from Pakistan, the lyrics of which read: ‘Aisa koi Mehboob na hoga, na kahin hai, baitha hai chatai pe, magar arsh nasheen hai’
“I feel bad about the changes that are taking place today in the name of religion. Every person has the right to practice the religion of his choice. Why should anyone force or divide in the name of religion”, Kumar said.

He said that several Muslims have invited him to Islam when they saw him working in the Masjids. “I politely decline and they go away. But at times some people insist and then I tell them, ‘In Islam, there is no compulsion in religion’. When they hear this, they fall silent knowing that this is the truth.”