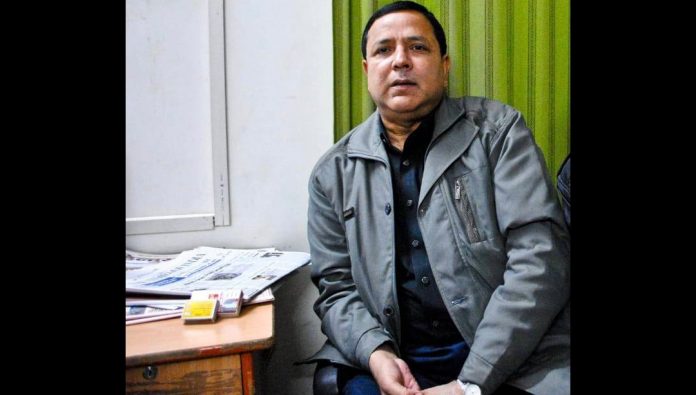 Who is interested to know the story of Mohsin Jamal? A gentleman who was a La Majaz and a La Sahir-rolled into one! It is certainly very unbecoming of me to contain my emotional expel, to write on a friend whom I had met around 25 years back, probably in 1997-98, and never found him to be emotionally or socially fatigued. Welcome to the world of Mohsin Jamal, someone who never had a watch or a calendar in his hamlet and was buried at Aishbagh cemetery, on July 28, 2022.

I very vividly remember, Mohsin Jamal, who was a journalist, writer, and always ‘updated’ into the world news, as once he had got a three-phase electricity, and a generator, all installed, for he wanted to see every moment of the last rites of Princess Diana. He would never let his eye slip any detail, perhaps, he was quite hitched to the departed-soul, as he himself was the one who did not find-his-love, and remained a bachelor throughout his life.

He was a virtual encyclopedia of Urdu poetry, for he remembered more than the proverbial ‘a lakh shairs’ (poetic renditions) of Asrar-ul-Haq ‘Majaz’, Raghupat Sahay ‘Firaq’, Abdul Hayee ‘Sahir’, Shabbir Hasan Khan ‘Josh’, Abdul Hameed ‘Adam’, Ahsan Danish, Faiz Ahmed ‘Faiz’, Parveen Shakir, Jan Nisar ‘Akhter’, Riaz Khairadabi, Khumar Barabankavi, Jaun Elia apart from the stalwarts like Ghalib, Sauda, Meer, Zauq, Aatish, Nasikh, Wali etc. Never there was a moment when he would not come-up with a ‘proportionate or an appropriate’ shair for any occasion. Apart from all that, what also made him was his cigarette smoking, which he never smoked till its last fag, his voice was always modulated like a professional anchor, which was God-gifted, and his sentences were always synchronized like that of newspaper-headlines. He had every prowess to impress anyone, let alone at times, even hypnotize!

His persona had everything which inculcated his cultural ethos; he was ceaselessly help a struggler in the field of media, music or into writing. He would never see the sun rise, his day started at 5 pm and he would retire back home always deeply post-midnight. He was very fond of dressing, most often a spotless white shirt, grey pants, shining always shoes, Ambedkerite glasses, pockets always loaded with wads of US Dollars, yes, Dollars, and a puffing cigarette is what was his cover-story, to hundreds of  friend/associates he had in Lucknow.  Never in my association with him for over a quarter of a decade did I dwell to unravel as to what he would do for his living! The question was simply out of place, for he never exuded on it. He would move always on his chartered-rickshaw! Was a darling of everyone in any function, and would, make himself overshadow anyone on any given occasion.

The veritable ease with which he would shorten sentences by his ‘dropping-words’ was always a feast to the ears. His rendezvous with theater, arts, music, voice-over, play-back singing etc made him a dynamic presence into what is called as a ‘world-of-finer-aspects’. His knack for music could not be tapped for he knew personal histories of films, songs, musicians, singers etc from Bombay. He had an impeccable memory and would delve hours on the making of films like Mughal-e-Azam, Baiju Bawra, Sita Aur Gita, Bobby etc. There were quite a few cinema stars, who knew him personally and some even often make long-distance-calls, before the advent of cell-phones, to listen from him endlessly the-‘shairs’, which was his forte.  His zest encompassed Marsiye, Manqabat, Musaddas, but he was shy-enough, to get them recorded in audio form or for Youtube. Had it was done, it was to be a treasure trove, as certainly it was to be a recipe for any budding actor or a cinema-vérité. He would narrate scene after scene from Agha Hashr Kashmiri, in accordance to characters and their vile. Where? At Sarwar hotel, his favourite pastime, ay Lal Khan ka Hata, , to the rapt attention of his friends who constituted doctors, engineers, editors, lecturers, academicians, businessmen all alike. Obviously, he was always the host.

He would regale ceaselessly his gatherings at Nazeerabad, who would flock around him, not always for his poetic-exuberance but for his versatile genius in colloquial accents. He was perhaps the last of the genre who would quote Asmat Chugtai, Saadat Hasan Manto, Rajender Singh Bedi, Ali Sardar Jafri etc, on their almost unknown aspects, always much to the awe of even research scholars. He would bring the gatherings ‘alive to thrive’ on his incessant quotations from Ameer Meenai, Momin Khan Monin.

I on many occasions would carry him finally to Pioneer, the spot in Lucknow which remained opened 24X7. He would always syntax it from the words of Akbar Allahabadi, “ Ghar se aayi hai Khabar Kal hai Chehleum Unka/ Pioneer likhta hai ki beemaar ka haal ach_cha hai ( Family informs that the 40th day of the dead is the next day/ Pioneer nevertheless tell the ill is still better) in the famous retort of the poet towards the end of the British rule and Pioneer’s biased reporting to it.  We would sit there until the wee hours as then I would drop him home. Once we ended up having 27 teas together, as he enamored the lines “Us se paimaan-e-wafa baandh rahi hai bulkul/ Kal na pehchan sakegi gul-e-tar ki soorat” (The nightingale is swearing by the flower/ will not be able to figure it out tomorrow as the flower will be worn-out after tears)

There are hordes of ‘listeners and moaners’ who are now no more to listen or see Mohsin Jamal. One of his friend,  Himanshu Bajpayee, who is now a Daastan Go, of international acclaim, says that he could not see Majaz but ‘Mohsin Bhai’ lessened the pain, for he fathomed Majaz  to the full-potential. Mohsin Bhai, therefore from now on, will remain out of the purview of people’s gaze, but will forever live in the heart of ‘everyone’ into which he kindled the fire of Majaz and would never let it flicker, until he himself flickered to it. “Haqq Magh.firat kare ajab Azaad mard tha” (May God bless the fearless-independent man) he would sometime requiem for himself.

Lucknow remained a bit same after Majaz, for Mohsin Jamal, inherited the echo, but will it now remain the same? May be yes or may be even no. Long-live Mohsin Bhai.

The writer is a former UP State Information Commissioner and writes on politics.