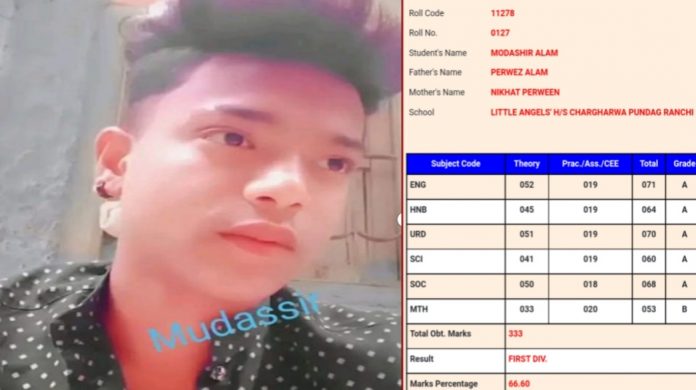 14-year-old Mudassir Alam, who was killed during during a protest held in Jharkhand’s Ranchi city on 10 June, has passed the 10th class examinations with first division. He obtained 66.6 per cent marks in the exams, whose results were declared by Jharkhand Academic Council 11 days after his death.

He was shot dead in front of a temple while he was chanting a slogan hailing Islam. He was  protesting against insulting remarks BJP leaders on Prophet Muhammad. On the same, another person named Sahil was also killed.

Remember, the 15 year old Mudassir who was shot dead in Ranchi over the protests. His class tenth results arrived today. He passed his exam with first division. pic.twitter.com/mfYXkQgXwS

Even after more than 10 days, the police have taken any action against the culprits. They have not even registered an FIR despite continuous attempts by families of the deceased.

Two days ago, All India Muslim Majlis-e-Ittehad-ul-Muslimeen president and MP Asaduddin Owaisi met their families. He criticised the state’s ruling party, JMM and the BJP as well in connection with their killing.