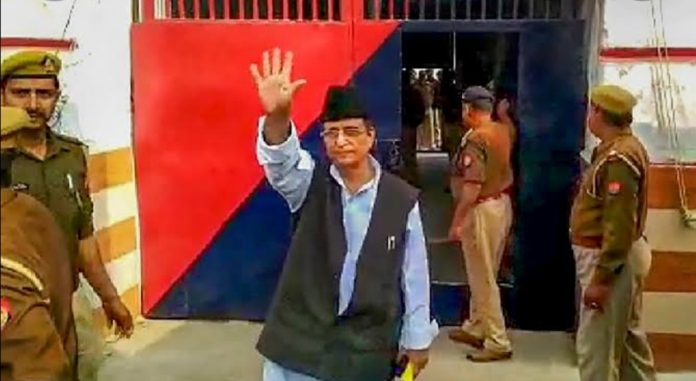 When on January 1, an order splashed on the screen of my cell phone, saying that all across UP, the meetings between those stranded inside UP jails and their relatives stands scrapped, owing to the rampant increase of Omicron variant of COVID-19 virus, all thoughts started to percolate down the memory lane. It had to be obvious, as I was to meet Muhammed Azam Khan on February 28, 2020, two days hence he was sent to Sitapur Jail, as a part of the worst political vendetta, and soon thereafter Corona-Virus had hit India, and then until November 2021, there was no scope to meet him.

I very vividly remember on the occasion of Eid in 2020 as well as in 2021, I could hardly celebrate the occasion and all I could do was to phone-call Muhammed Sharif Khan, the elder sibling of MA Khan to try and share the trauma and misfortune to have befallen the family. We would discuss about hundreds of unanswered phone-calls I had made from March 2020 onwards, to try to meet the jail authorities and plead that prisoners were granted parole due to the second wave of COVID-19, and that MA Khan too deserved it. But, all efforts fell on the dead rocks.

Later MA Khan, in July 2021, had to be shifted to Medanta Hospital, Lucknow, after he and his son Abdullah Azam Khan, were diagnosed with COVID-19 symptoms, turned back to Sitapur Jail and again readmitted in September 2021, to finally again return to Sitapur Jail. Throughout MA Khan’s stay at Medanta Hospital I was to visit every third-fourth day, speak to Director of Medanta Hospital Professor Kapoor and update Khan’s family and friends as a regular feature. No one was allowed inside the hospital due to COVID-19 restrictions. MA Khan is a sitting MP (Rampur) , his son is MLA (Rampur) and his wife Tazeen Fatima is also MLA (Rampur), who too was jailed and had got released on bail in December 2020. Abdullah Azam Khan too has got released on January 15, at about 9 pm, after a stay of 23 months. Huge crowds had gathered to welcome him out. MA Khan has still to wait, as more than 100 cases were lodged against him, by the BJP government run by Ajay Singh Bisht.

Therefore, any meeting with MA Khan inside jail in any near future is impossible, with the only hope that he too gets his ‘bails’ in remaining two cases too, but it is also learnt that UP government has moved an application in the Allahabad High Court, to cancel the ‘bails’ granted to MA Khan as yet and the next hearing is on February 2. Abdullah Azam Khan has been granted bail in all the 43 cases lodged against him.

In between November-December 2021 I met the father-son duo for four-times and the last of it happened on December 29, 2021. So this way the article is to be the sixth in its series, considering the one I wrote when MA Khan was in Medanta Hospital in May 2021, all published in MuslimMirror. Once everyone including me was disallowed as the estranged Shivpal Yadav met MA Khan on November 28, 2021.

The meeting ultimately led to a thaw and resulted into Shivpal Yadav forging an alliance with Samajwadi Party led by Akhilesh Yadav, in the elections due in February 2022.

Anoop Kumar Gupta, Ex. MLA Sitapur and his letter for the writer.

It was Wednesday on December 29, 2021, two days before I had got my RTPCR done as I moved for Sitapur in the rains which had continued since the previous night. The first halt had to be at Anoop Kumar Gupta’s place, an Ex. MLA (Sitapur) with a warm-tea. He has been tremendous in his hospitality, inherited well from his father (late) Om Prakash Gupta-a four times MLA (Sitapur). Anoop’s PS Anurag Singh also had been very prompt into filling-up with the logistics. A letter for me, therefore, had already been submitted to the jail authorities. Outside the jail premises was present Adeeb Azam Khan, the elder son of MA Khan who had to leave Rampur at 6 am so as to reach the stipulated time i.e. 12:30 pm. He had brought a halwa, prepared with milk, almonds, sugar, butter, and cardamom etc. by his mother. She too is ailing and once had fractured her shoulder when she was inside Sitapur Jail.

MA Khan, came out from his barrack, his face covered with mask amid ‘cries, sighs and groans ’-as the first spontaneous emotion from the visitors. But, this time due to rains there was no place to sit, therefore, all the chairs had to be cramped, inside the verandah adjacent his barrack, while some sticks were lit for warmth- all the while as there were pouring rains outside. MA Khan, in his pathan-suit, would give a patient ear to Badan Singh, from Bilaspur and would consume himself to the politics in Bilaspur constituency. He would then hug someone who was most brutally beaten by police, then would engage with a female social activist from Mainpuri who herself was jailed and charged under IPC 302-which is attempt to murder.

Everyone just stood in stoic silence as MA Khan took to speak about Jung-e-Badr, Islam’s first battle and referred that during the battle, where Muslims were just 313 in numbers and with a few weapons against thousands, Prophet Muhammed ordered Muslims to walk in pride with ‘their chests bloated’ as “that it what all can be when anyone walks in the way of truth,” he said. He would add that justice done to a tyrant is to bring him to book, “leniency would amount to injustice.” Abdullah Azam Khan would add, “Even those who smiled, unlike those who conspired, at our calamity, will find a hard time.” 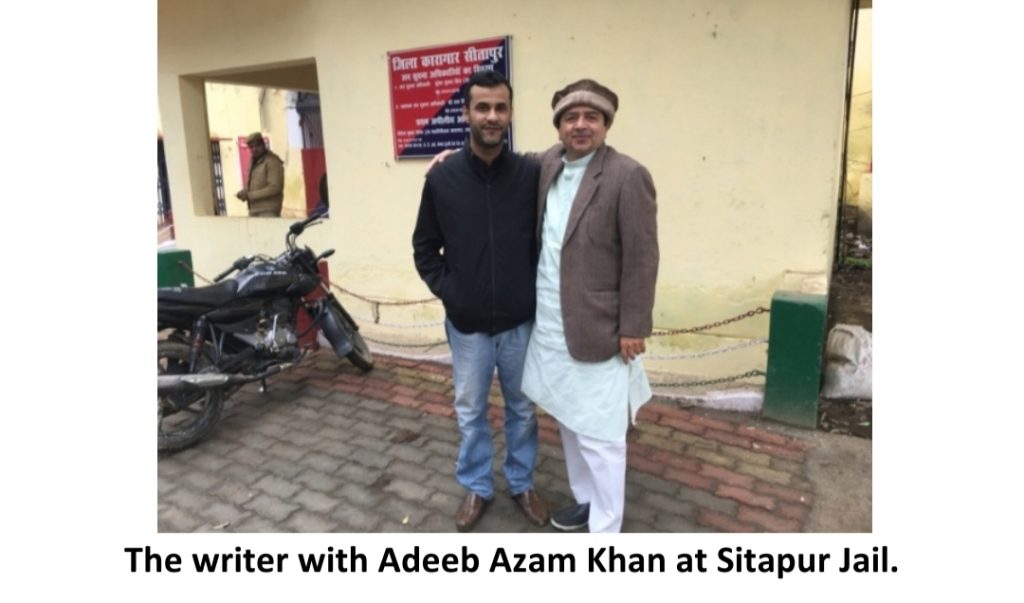 MA Khan would laud the people of Rampur who remained undeterred despite the worst ordeal meted to them by the BJP government. He would relate the atrocities done to Jews by Adolf Hitler as to those perpetrated on the people of Rampur-all in his enmity and for the people’s love he commands. His body-posturing, at that moment, showed as that of a raging lion and all raring to go. His commitment to his people, easily could make construe, that soon he would be in the electoral fray in the coming assembly elections along with his son. 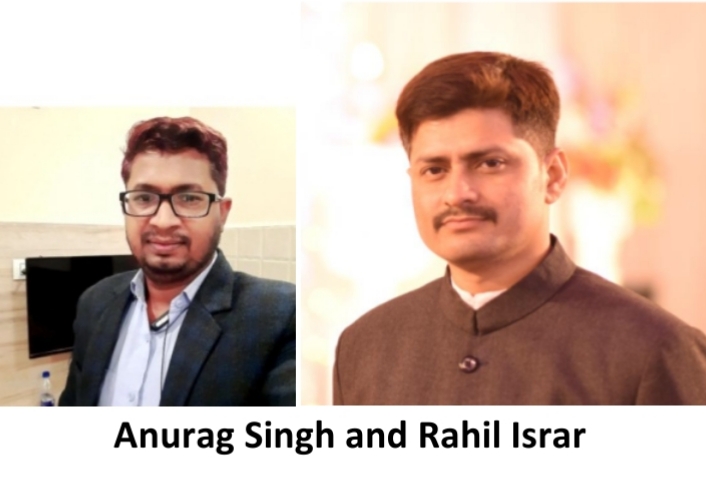 Last of all, as the time was ticking, I presented him with the prints of my 22 articles published in the last two months (2021), which also had covered my visits to Sitapur Jail, which “he would read word-by-word,” he conveyed and also in the same vein he added that he would get them all published from Muhammed Ali Jauhar University Press, get them translated into not only Urdu/Hindi but also in Turkish and Arabic languages. I took it all as a sobriquet and just wished that he too comes out from jail all the too soon, and give a furthermore impetus to the secular-socialist force headed by Akhilesh Yadav.

On way back I specially thanked Sitapur Jail Superintendent Suresh Kumar Singh, and also my friend Rahil Israr, who took the pains to drive every time from Lucknow. For the people of UP it is now high time that MA Khan too finds a space outside the Sitapur Jail. Will he fight elections while from inside or outside the jail is the big question?