Kolkata, July 27 : In the run of  forming second term government   Trinamool Congress  in West Bengal led by Mamata Banerjee is facing  allegation of  discrimination against Muslim community. BJP and other saffron parties always blame West Bengal CM Mamata Banerjee for appeasement of Muslim in state. Apparently BJP has decided to play ‘Muslim appeasement’ card in coming 2021 state Assembly elections. But, reality is different. However Mamata Banerjee is working for the development of the minority communities in Bengal. Her secular image has got popularity among the Muslims in the state.

She introduced ten percent OBC-A reservation in government jobs in Bengal. OBC-A particularly covers Muslim community. So, Muslims are benefited from the reservation. But a section of communal officers in the  inside  the administration not willing to implement  OBC-A reservation quota properly. Even recruitment of teachers in English Medium Model Madrasa which is under the Minority Affair and Madrasa Education department are not concerned  with the deprived the Muslim community.

On 23rd July 2020 Public Service Commission of West Bengal Government declared the recommended teachers list of Geography subject for 12 state run English Medium Model Madrasa in Bengal. Surprisingly all  12 recommended teachers come from Hindu community. No Muslim figures in the recommended teachers list. Netizens   on social media are protesting against the ‘communal’ approach of the ruling government. Even, former State Minority Affair and Madrasa education Minister Dr. Abdus Sattar, who is now a congress leader, has condemned the discrimination   recruitment proces of Model Madrasa teachers. Not only Dr. Abdus Sattar, Member of Parliament and Congress leader Pradip Bhattacharya, MP Bikash Ranjan Bhattacharya.and Pradip Bhattacharya alleged that, there is lack of transparency in recruitment of teachers in Model Madrasa.  Interview panel should have Muslim representative and secular persons for proper recruitment. MLA Sujan Chakraborty condemned that saying ‘absence of minority candidate in recruitment for Model Madrasa is surprising. Social Students Organisations has protested the move. Ariyan Sultan the head of organization told, that they had started campaigning against the discrimination of the Muslim candidates in  Model Madrasa teacher recruitment in the state.

In West Bengal the first Government run English medium High Madrasa started functioning on 23rd  June for the academic year 2014-15 in Nadia district’s Paninala village.  At that time for KG classes and above 5   teachers had been appointed on temporary basis. Classes were held from 8 am to 12 noon. This Madrasa had been  ‘Paninala  English Medium High Madrasa’ and  built by the state government on 187 acres of Waqf land belonging to . department of Minority Affairs and Madrasa Education had  spent Rs 8 crore for the construction and basic infrastructure of  Madrasa buildings . It was a great  initiatives by  Nadia’s District Magistrate P. B. Saleem who introduced first English Medium Madrasa in Bengal. But the concept to establish English Medium Madrasa was introduced  during  Left Front regime in  early 2010. At that time Dr. Abdus Sattar was State Minority Affiars  minister . According to Abdus Sattar ‘in the first phase ‘ the Madrasa Education department planned  to open 12 English Medium Madrasa in 11 minority-dominated districts.

Apart from this, State Minority Affairs and Madrasa Education Department took initiatives to establish at least 14 Model Madrasa which is English medium. This initiative has been rapidly increased when Chief Minister announced allocation of sufficient fund in state Budget for Minority development.

English Medium Madrasa teacher recruitment processing was not controlled by Madrasa Service Commission. Madrasa Service Commission engaged to recruit teaching and non-teaching staff for the High Madrasa, Senior Madrasa only. These 614 Madrasa were recognized by West Bengal  Board of Madrasah Education under the Minority Affairs and Madrasa Education Department. All these Madrasa are government aided. Apart from this, all English medium Madrasa are  running directly by state government. However English medium Madrasa are controlled by Directorate of Madrasa Education, but recruitment process arranged by West Bengal Public Service commission. Naturally, as per DME recommendation PSC managing recruited teachers for said 12 English Medium Madrasa.  In this regards PSC issued advertisement notice for recruitment. After that  many candidates appeared  in examination and  PSC called successful candidates for interview. 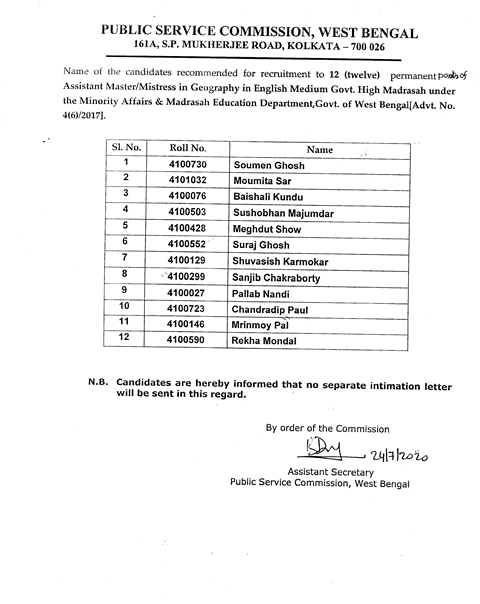 PSC called for interview for different subject to recruit Assistant Master/ Mistress Against the Advt 4 (2) 2017 for English, Advt 4 (3) 2017 for Bengali, Advt 4 (4) 2017 for Mathematics, Advt 4 (5) 2017 for Chemistry/Physics and Advt 4 (6) 2017 for Geography. The interview was called in March, 2020 on separate dates. After the interview only Geography subject result has been declared on 24th  July, 2020. Result show, for 12 permanent post of Geography subject all recommended teachers are from Hindu Community, none of them is Muslim. However, interview was held on 2nd to 5th March, 2020, in which out of 64 candidates  14 were Muslims. They are, Firdausi Rahman Siddika, Joynab Khatun, Rozina Khatun, Mehedi Hasan Mandal, Sairuddin Sk, Bulbul Hasan, Md, Nasibul Hoque, Munshi Md. Amim, Tarikul Islam, Ariful Mallick, Md Hafizur Rahman, Iman Sk, Md. Juber Alam and Md. Azizul Hossain.