NEW DELHI:  The All India Muslim Personal Law Board on Tuesday opposed the directive of the Central government to organise the ‘Surya Namaskar’ program in schools to mark the 75th anniversary of Independence Day saying ‘Surya Namaskar’ is a form of Surya puja (worship of the sun) and Islam does not allow it.

Khalid Saifullah Rahmani, general secretary of AIMPLB has also asked the Muslim students not to participate in it.

The program is being organised in schools across the country between January 1 to 7 to mark the Azadi Ka Amrit Mahotsav celebrations.

Khalid Saifullah Rahmani issued a statement and said, “Secretary School Education has in a circular directed to conduct Surya Namaskar in 30,000 schools as part of celebration of Independence, which is contrary to the rights given in the constitution.”

He said that the “government has directed schools to conduct it from January 1 and a musical programme is going to be conducted on January 26 on the theme.” 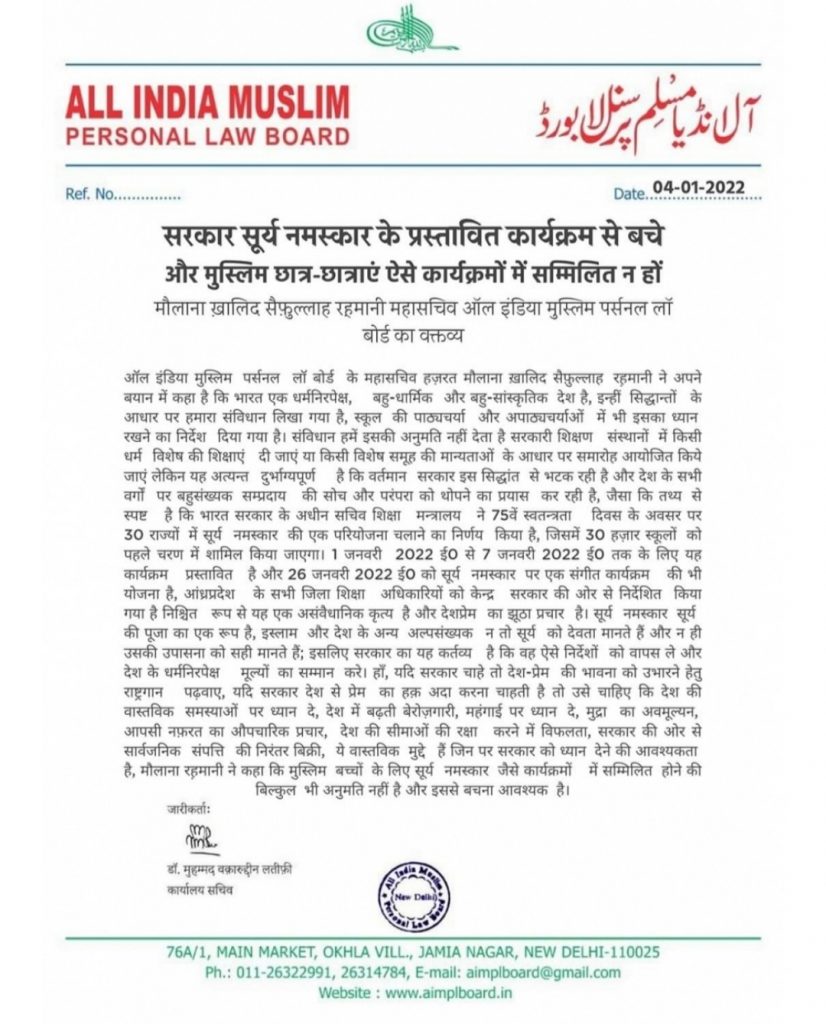 He alleged: “Surya Namaskar is unconstitutional and is false patriotism as minority in the country do not believe in idol worship… so imposing it is not in sync with the constitution and asked the government to refrain from it and follow secular credentials of the country.”

The AIMPLB has opposed the move, saying ‘Surya Namaskar’ is a form of Surya puja (worship of the sun) and Islam does not allow it.

Rahmani, while speaking with IANS on the phone said, “Minorities, including Christians do not adhere to idol worship and consider Sun as God …so we wanted to raise this issue to the government and raise our concerns.”

He said, “Muslim children are not allowed and they should refrain from participating in the programme.”

The Ministry of Education, Government of India letter No. F.No. 12-5/2020-IS-4 dated December 16, 2021 has informed that “the National Yogasana sports Federation under the banner of Azadi Ka Amrit Mahotsav has decided to run a project of 750 million Surya Namaskar from 01 Jan 2022 to 07 Feb 2022. Musical performance on Surya Namaskar is also planned on 26 January 2022.”

In many states the programme was led by the government functionaries on January 1.-IANS

Battle for UP: AIMPLB member asks Owaisi not to split Muslim votes