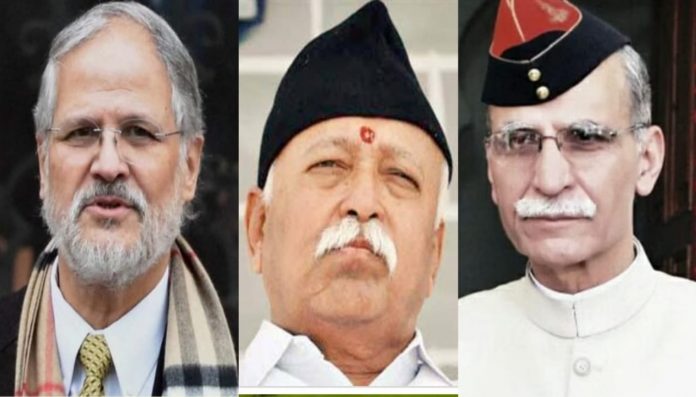 A closed-door meeting between Rashtriya Swayamsevak Sangh (RSS) Sarsanghchalak Mohan Bhagwat and a group of ’eminent’ Muslim personalities took place in the end of August at the RSS headquarters at Keshav Kunj in Delhi’s Jhandewalan, reported the Quint.

Along with Mohan Bhagwat, Sah Sarkaryavah Krishna Gopal of RSS was also present.

According one participant ‘this meeting was planned after Nupur Sharma episodes’.

Numerous topics, including the Gyanvapi conflict, hate crimes, and population control, were also discussed during the discussion, which lasted for more than an hour.

The objective of the visit, according to one of the group’s participants who wished to remain anonymous, was to “highlight issues pertaining to the Muslim community and do something about the communal divide that exists”.

The member said that the group “did not want any media attention around the visit” and that their “initiative should not be misunderstood.”

“We are concerned about what is happening (in the country) and that is why we went for this meeting,” the member said.

According to one of the persons who attended the meeting, Mohan Bhagwat said that “Muslims and Islam are an integral part of India” but he added that “Muslims should stop calling Hindus as Kafirs”.

To this one of the group members replied, “The term was used in a particular context during Prophet Mohammad’s time and it isn’t for Hindus of today at all”.

The RSS leader recalled his comment, “Why look for a Shivling in every mosque?” to the gathering. In order to bridge the gap between Muslims and the RSS, he claimed that this should have been advanced by Muslims.

The RSS side said at the meeting that this was just a “ice-breaker” and that a larger gathering of “Muslim intellectuals” would be planned later.

Gyanvapi row: Can Bhagwat’s views lead to an amicable resolution