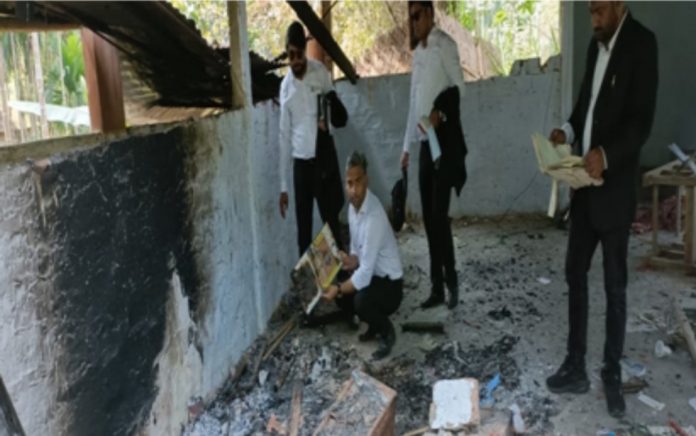 New Delhi: Releasing a fact finding report on Tripura violence, an investigation team of Supreme Court lawyers and human rights organizations on Tuesday revealed that if the BJP government had wanted, it could have thwarted premeditated violence against Muslim minority in Tripura but it allegedly gave free hands to the Hindutva mobs. The investigative report also revealed that Muslims were attacked at several places across the state and 12 mosques were ransacked and damaged.

The detailed factual inquiry report titled as “Humanity under Attack in Tripura; #Muslim lives matter” was released at the Press Club of India by the team members who visited Tripura.

Addressing the media, they underlined that the manner in which the situation has been developed after the incident of violence against Muslims in Tripura suggests that if the government had wanted, it could have saved such a horrible incident from happening.

“This is the complete failure of the government and the political interests of the BJP. The ideology of violent patriotism has captured the state and has conspicuous support amongst the public,” they added.

The investigation team met the aggrieved parties and gathered information and facts related to the violence and came to the conclusions that the protests were held at 51 places in Tripura over incidents of attacks on Hindu minorities in Bangladesh. Violence started over the demonstrations, properties were burnt and a huge panic situation was created targeting particularly Muslims.

‘Violence started after the demonstrations. The facts which have come to light before the investigation team primarily indicate that if the government had taken appropriate steps on time, the violence would not have assumed such a horrific proportion.

The fact finding team found that the incident happened to further the political interest of Bhartiya Janta Party. Their Probe reveals that the protests were held at 51 places in Tripura over incidents of attacks on Hindu minorities in Bangladesh. As many as 12 Masjid have been vandalized and Quran also burned when rioters fired at a Masjid  in Panisagar of North Tripura.

Munawar Ali, 72, a resident of Rava Bazaar in Panisagar told the fact-finding team that announcements were being made for the 26 October misal (rally) from October 15 in the Panisagar division. In that announcement, VHP people were saying that Hindus who would not participate in this rally will be boycotted.

“The people of VHP had brought JCB machines to the rally. With this machine their intention was to damage shops and mosques. They tried it unsuccessfully at a shop in Rava Bazaar. We, all the men, children, young and old of the village started gathering near the mosque to save the mosque. The distance of Rawa Bazar from the mosque is 500 meters and the shops of Rava Bazar are clearly visible from there” he added.

We have never seen so much hatred in all these years. After the BJP government came to power in the state, an atmosphere was created against the Muslims. The result of which has come out in the form of violence, local Muslims told the team.

When the arson was taking place, we called the local BJP MLA Vinay Bhushan Das 7-8 times. He picked up the phone once and said that he was in a meeting in Agartala, Munawar Ali stated to the Team.

After the incident, the men are guarding outside the houses in night shifts. There is still an atmosphere of fear among the people.

They announced that the investigation team will soon release its detailed report in Delhi and this report will be sent to the President of India, Chief Justice of Supreme Court, Union Home Secretary, National Commission for Minorities, and National Human Rights Commission.