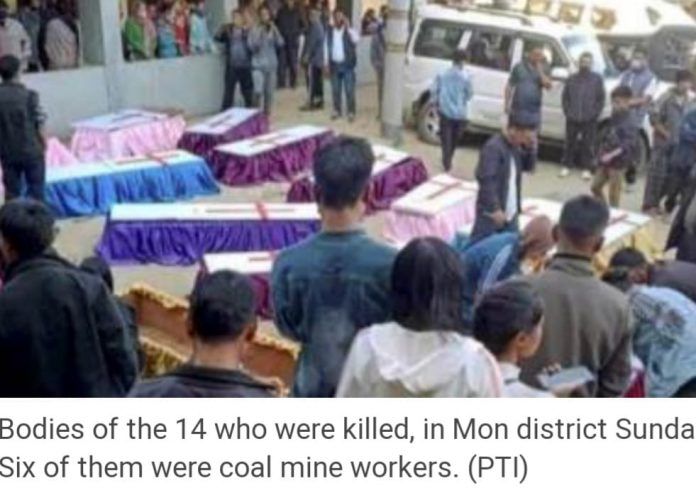 New Delhi: A day after the botched Army operation in Nagaland which led to the tragic death of 17 civilians, the demand is growing to annul the Armed Forces Special Powers Act (AFSP Act) which gives unbridled powers to armed forces without any accountability. Even ruling BJP’s allies in North East joined the chorus to repeal the act following the incident. The demand also echoed in the Parliament.

Nagaland chief minister Neiphiu Rio, who is the BJP ally, demanded annulment of the “draconian” law and promised stringent action over the “indiscriminate firing” by security forces that killed 14 civilians in Mon district on Sunday. Meghalaya chief minister Conrad Sangma, a BJP ally like Rio, joined the chorus for the removal of the Act. which gives the forces extraordinary powers to search, arrest and shoot.Addressing the funeral service of the slain civilians in an emotionally charged Mon town on Monday morning, Rio condemned the impunity that the AFSPA grants to the forces.

Rio, whose Nationalist Democratic Progressive Party (NDPP) is part of the NDA, said: “This case will not be taken as AFSPA. Action will be taken. There was indiscriminate firing. Investigation has started. We are with you (people of Mon), we are in it together.”

“It’s not only Nagaland and the human rights commission; even the world is debating the law (AFSPA). All want it removed. They (the Centre) say it cannot be removed until the Naga issue is resolved,” Rio said.

Civil society groups in North East also joined the demand as the AFSPA is in force in four states of the Northeast — in Nagaland, Assam, Manipur (except the Imphal municipal area) and three districts and eight police stations of Arunachal Pradesh.

The Mon-headquartered Konyak Union, the apex body of the Konyak tribe, sought the immediate repeal of the AFSPA from the entire Northeast and the removal of 27 Assam Rifles from Mon district for failing to “give security to its citizens” as military forces from another state had “intruded and committed” the massacre in Nagaland.

The North East Students’ Organisation, an umbrella body of eight leading students’ organisations in the region, echoed the demand.

Opposition political parties and Muslim groups condemned the killings and lent support to the demand.

Strongly condemning the killings, this incident, once again, the CPI (M) underlines the need to remove the AFSPA from the Statute Book.

Former Bombay High Court judge and President of Movement against UAPA and Other Repressive Laws (MURL) Justice B G Kolse Patil said AFSPA is the main reason for the uncontrolled military powers for detention, torture, destruction, killing and execution of Indian citizens in North East and other border states.

Justice Patil reminded that in 2017, the Supreme Court had ordered an investigation into 1,528 cases of alleged extrajudicial killings between 2000 and 2012 by the security forces and police in neighbouring Manipur, another state under AFSPA. It is a law that has great potential for large-scale human rights violations.

Popular Front of India Chairman O.M.A Salam termed the killing as a horrific incident that yet again proved human lives have no value left under the BJP rule. The Home Minister and Defence Minister can’t get away from the responsibility of these cold-blood murders by merely expressing their anguish, Salam said.

The North-East states have a prolonged history of atrocities by the army and paramilitary groups under the garb of laws like AFSPA. It is high time such laws are scrapped as it violates and dehumanises innocent citizens, Front leader said.

Meanwhile, in a letter to the President Ramnath Kovind, the Konyak Union, the apex body of the Konyak Naga community which dominates the district, said all the Army personnel involved in the incident should be identified and booked for the massacre. The Union also demanded that all units of the 27 Assam Rifles vacate the district for failing to provide security and that the AFSPA be repealed.

The ghastly incident took place on Sunday in Mon district of Nagaland where a special unit of the Army opened fire on a vehicle and killed six of the eight coal miners seated inside. The president of Oting Village Students’ Union (OVSU), Keapwang Konyak, informed that the incident came to light after the victims didn’t return home as usual. He informed that six persons were killed on the spot while four others were killed after the volunteers set the vehicle on fire.