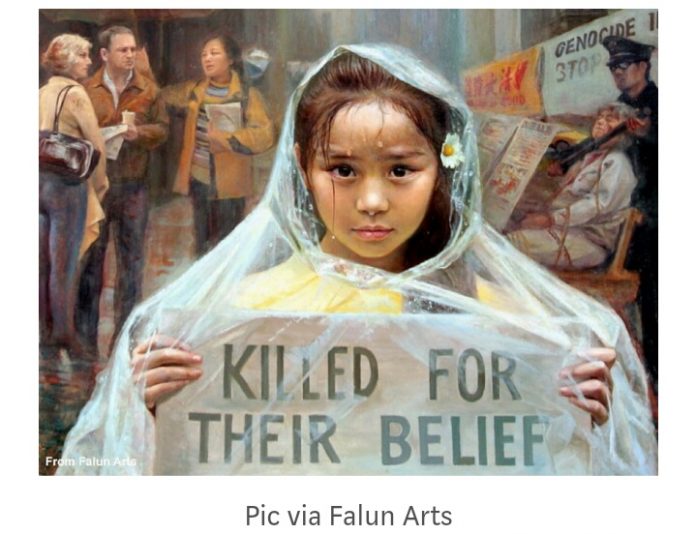 “I was called by my chief surgeon to go to a room near the Urumqi execution grounds to remove the liver and two kidneys from an executed prisoner,” Enver Tohti, an exiled Uyghur oncology surgeon, told me. “It turned out he wasn’t fully dead because they [Chinese execution squad] shot him through the right chest [intentionally] to knock him out [without killing him], so I would have time to remove his organs,” a surgery his chief surgeon demand he perform without giving the prisoner an anaesthetic.

Tohti would see the man’s still beating heart as he removed his kidneys and liver.

This deliberately botched execution of a Uyghur prisoner took place in 1995, and would be the first time Tohti witnessed and unwittingly participated in China’s live organ harvesting program, telling a UK newspaper in 2013 that it wasn’t years later until he realized what he had been a part of, and just how widespread and systematic the practice had become in the Uyghur Muslim majority region.

Three years later, Tohti fled China after disclosing how a nuclear weapons testing facility in Xinjiang was causing a spike in cancer rates among the Uyghur, and in 1998 he helped a British media production company produce a documentary on nuclear radiation in the region titled Death of the Silk Road.

When I pressed Tohti on this claim, he admitted to having no direct evidence, only unverified second-hand accounts, of China selling or marketing “halal” organs to wealthy Saudi organ recipients, and insisted it was something “best not spoken about until it could be confirmed,” but when I asked why he no longer stands by the earlier assertion he gave RFA, he pivoted to expressing fear for his mother’s safety, who remains in Xinjiang.

Uyghur activists, including Arslan Hidayat, son-in-law of missing famous Uyghur Muslim comic Adil Mijit, have told me how China threatens the family members of those living abroad, specifically those who speak out publicly against its crimes in Xinjiang.

According to Tohti, however, the demand for Uyghur organs outweighs supply, and thus explains why CCP authorities in Xinjiang implemented compulsory blood sample collection from Uyghur Muslims via the National Health Medical Examination, with the objective of creating a “live organ-matching database.”

Dr Faisal Shaheen, director of the Saudi Center for Organ Transplants, told Arabian Business that 410 Saudis had purchased organs in a single two-year period spanning 2012–14 from “black markets” in China, Egypt and Pakistan, while also adding that 7,000 Saudi patients are in need of kidney transplants.

The European Parliament’s public health committee and human rights subcommittee says illegally harvested kidneys fetch as much as 150,000 Euros(US$165,000) each!

This week, UK lawmakers warnedcitizens desperate for transplant operations that they could be unknowingly “playing a role in the profiteering of atrocities against inmates in the Communist government’s network if prisons and detention camps.”

With upwards of 2 million Uyghur Muslims held in a network of concentration camps and prisons throughout Xinjiang and the rest of China, amounting to the largest mass detention of a religious minority since the worst pogroms of the middle 20th century, the case against China’s barbaric practice of harvesting the live organs of Muslims is becoming ever more damning.

In fact, this report cited Tohti, the Uyghur surgeon I interviewed for this article, crediting him as being the “first known case of live organ harvesting,” corroborating his claim that he extracted “the kidneys and liver from a prisoner who had been shot in the chest with the objective not to kill the prisoner but to send the prisoner’s body into shock.”

The authors also observe how “another medical witness described being forced to administer blood tests of Uyghur political prisoners on behalf of a handful of ageing, high-ranking, Chinese Communist Party officials who needed tissue-matching organs,” adding that because “the officials had travelled to Urumqi specifically for the operations, this can be seen as one of the first cases of ‘organ tourism,’ albeit within China’s borders, while also underscoring that the Party was explicitly involved in the forced organ harvesting of political and religious prisoners from the very beginning.”

The evidence against China not only forms a body of evidence, but also a “field of knowledge” in its own right, with several books published on the issue, including State Organs: Transplant Abuse in China (2012); The Slaughter: Mass Killings Organ Harvesting, and China’s Secret Solution to Its Dissident Problem(2014); Bloody Harvest (2009), The Slaughter (2014); alongside dozens of articles published in well-credentialed journals, several documentaries, and a NGO that is dedicated to bringing an end to China’s practice of harvesting live organs from political prisoners — Doctors Against Forced Organ Harvesting (DAFOH).

In fact, a UK panel has found the evidence and testimonies that have emerged during its investigations into China’s live-organ harvesting program so “overwhelming,” it took what Biter Winter has described as the “unusual step” of releasing interim findings before its final ruling, doing so in the hope “the oxygen of publicity given to the allegations made and supported to the extent they are by our interim judgment, may allow the real oxygen of life to continue life itself in some who might otherwise be killed.”

As for claims, China is removing live organs from executed Uyghur Muslims and marketing them as “halal” and then distributing via a network to wealthy Saudi clients, we know that China has taken the biometric data of the upwards of 2 million Uyghur it holds in its concentration camps, along with those of millions of others in Xinjiang, and we also know that as many as 100,000 organ transplants are carried out each year in China, according to the authors of Bloody Harvest/Slaughter.

In an interview with the Uighur Times, Tohti showed the online newspaper a photograph of the Human Organ Transportation Green-Path (HOTGP) at Urumqi International Airport, which allegedly provides a channel for large numbers of human organs to be shipped out of the country to recipients around the world, a claim supported by a photograph that went viral on social media showing a priority lane sign marked “Special Passengers, Human Organ Exportation Lane.”

China Southern Airline has reported more than 500 organ transportations since Tohti gave the newspaper an interview in early March, according to the Uighur Times, a claim I’ve been unable to verify, although the Chinese government owned China Dailyannounced the airline had launched a “green passage” to transport what it claims are “donated” organs.

These crimes against humanity are every bit as horrific as they unimaginable, but given Uyghur activists have described to me and many others how Uyghur Muslims detained in concentration camps are being subjected to gang rapes, sterilization programs, systematic torture, forced marriage to Han Chinese citizens, forced disappearances and executions, there’s every reason to believe claims of live-organ harvesting barely scratch the surface of what is the largest cultural genocide of Muslims in modern times.

C J Werleman is an independent investigative journalist . He tries to expose and end injustices against Muslims around the world.This article was first published in extranewsfeed.com.