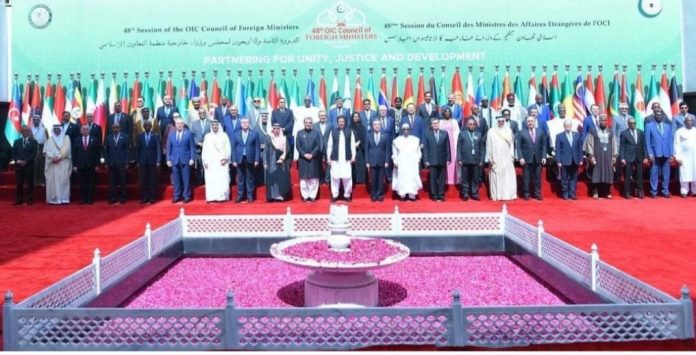 New Delhi: The 57-member Organization of Islamic Cooperation (OIC) has condemned “the rising wave of Islamophobia, hate speech, and hate crimes against minorities India”. At the 48th Session of the Council of Foreign Ministers held in Islamabad on 22 – 23 March, it has urged the international community, particularly the United Nations and relevant international human rights and humanitarian organisations, to hold India accountable “for its gross and systematic human rights violations against minorities, particularly Muslims,” and to take immediate measures to protect them from impending genocide.

The OIC passed 61 resolutions addressing the plight of Muslim minorities living in non-OIC Member States, which account for more than one-third of the Muslim Ummah, during the two-day conference. Thirty of these resolutions are related to India, with each issue involving Muslims and Christian minorities graphically documented.  During the conference, the OIC’s Islamophobia Observatory also presented its 14th Annual Report spreading over 224 pages.

In its resolutions on India, the OIC says “the rising wave of Islamophobia, hate speech and hate crimes motivated by the extremist Hindutva ideology under the RSS-BJP dispensation in India that has led to political, economic and social marginalization of Indian Muslims with a growing sense of insecurity, and the failure of the Government of India to provide safety and security to the minorities in India”.

It says, “extremely alarmed at the persistent shrinking and sacrilege of religious places of Muslims and continued disruption of Friday Prayers across Indian states”.

Deploring the “state-sanctioned hysteria and hatred” exhibited in India against Muslims and their heritage, the OIC says it “rejects the decision of the Indian Supreme Court in November 2019 regarding the historic Babri Masjid, that allowed the construction of temple on the very site where Mosque stood for around five centuries and the subsequent shameless acquittal of criminals, mainly BJP leaders who were the forerunners of the Ram Janambhoomi Movement”.

It also deplores the action by the Government of India to lay the foundation stone for the construction of the Ram Mandir  on 5 August 2020 and “these actions reflect the systematic attempts by India to rewrite history by obliterating all heritages  of Islamic culture and tradition and to turn India into a Hindu Rashtra”.

It reiterates demand to  the Government of India to ensure that the Babri Mosque is rebuilt on its original site and to punish those responsible for its demolition.”

“OIC is alarmed at the proliferation of fear-mongering, dehumanizing and communally divisive content targeted against Muslims by Indian media associated with or enjoying the patronage of the RSS”.

“Strongly condemns the despicable and highly repugnant acts of harassing, humiliating, and outraging the dignity of Muslim women in India through offensive and depraving online auction campaigns, inviting bidding on them.”

“Expresses deep concern over the unrelenting vicious Islamophobic campaign in India maligning Muslims for spread of COVID-19 as well as their negative profiling in media subjecting them to discrimination and violence with impunity”.

“Urges India to take immediate steps for the protection of hundreds of vulnerable mosques and to ensure the safety and protection of Muslims and Islamic Holy sites throughout India”.

The OIC also urges the United Nations Alliance of Civilization (UNAOC) to undertake a mapping exercise consisting of all such vulnerable religious sites in India with a view to improving their overall protection;

It also  condemns that “a series of anti-Muslim actions taken by the Indian Government like discriminatory screening of Muslims from National Register of Citizens (NRC) in Assam due to which hundreds of thousands of Muslims have been stripped off their citizenship; religious discrimination against Muslims under the Citizenship Amendment Act (CAA); the Enemy Property Act; anti-Muslim statements and rising incidents of lynching by cow vigilantes, often with state complicity where perpetrators commit crimes with impunity; repugnant schemes like ‘Ghar Wapsi” and “Love Jihad”; biased judgments by Indian courts against Muslims, including the Babri Masjid verdict and the cases involving “Saffron Terror”; and open plan to build a Hindu temple at the very site of centuries- old Babri mosque and claims over other mosques, are part of the RSS-BJP’s elaborate and systematic plan to transform India into a “Hindu Rashtra” and to further subjugate Muslims in India as a second-class citizens”.

It deplores the “systematic persecution and violence” against the Muslims in Assam and the vandalization of Muslim properties, houses and shops under the so-called eviction campaign.”

The OIC also passes resolution on the communal riots in New Delhi in the aftermath of the introduction of the CAA, in which 50 Muslims were killed with “state complicity”.

It  condemns the brutal crackdown on protestors opposing the CAA and NRC, especially the large scale targeted and systematic attacks on innocent Muslims by police in Uttar Pradesh and other parts of India and state sponsored violence against students in Aligarh Muslims University, Jamia Millia Islamia and Jawaharlal Nehru University which led to loss of precious lives.

Its resolutions on  Tripura and Assam says that   “the growing religious intolerance and fanaticism in India which is reflected in the relentless attacks against the properties, businesses and places of residence of Muslims in Indian states such as Tripura and Assam”.

The OIC demands the Indian Government to stop its “anti-minority agenda; immediately repeal CAA and NRC; safeguard the rights of minorities under international law and take meaningful steps to improve political, social and economic conditions of Muslims in India in line with the recommendations of the Sachar Committee Report”.

The OIC resolution also takes notice the widely reported open calls by Hindutva proponents for carrying out genocide of Indian Muslims during the “Dharma Sansad” held at Haridwar, and further impress upon the Government of India that “it is highly reprehensible that the Hindu Raksha Sena’s Prabodhanand Giri and other Hindutva figures who called for ethnic cleansing have neither expressed any regret nor has the Indian government condemned or taken any action against them”.

It also expresses deep concern over reports regarding ‘Forced Conversion’ of minorities in India by Hindu extremist elements through ‘Ghar Wapsi’ or ‘Home Coming’ campaign and education programmes aimed at obliterating practices and rituals related to other religions and distortion of historic facts.

It takes note with grave concern of a number of incidents in India where people have been killed, imprisoned and fined “for slaughtering cows, especially on Eid-ul-Azha”.

It notes with deep concern the abominable calls such as ‘Chadar Mukt, Father Mukt Bharat (an India free of veil-wearing Muslims and Christian priests)’ and ‘shoot the traitors’ given by senior BJP leadership which often accompany acts of violence.

“Expresses concern on the Indian Supreme Court’s ruling releasing convicts like Babu Bajrangi who have been found guilty of killing and raping of Muslims in the Gujarat massacre of 2002, and release of Colonel Prohit, main accused of Samjhota Express bombing of 2007.”

It appeals to  the Office of the High Commissioner for Human Rights and the UN Special Procedures to fully investigate incidents of systematic, widespread and targeted acts of hate speech and violence against minorities.

And urges India to “provide access to the UN Special Rapporteur on Minorities to Assam and other regions as requested by him to ascertain the situation through on-field visits”.