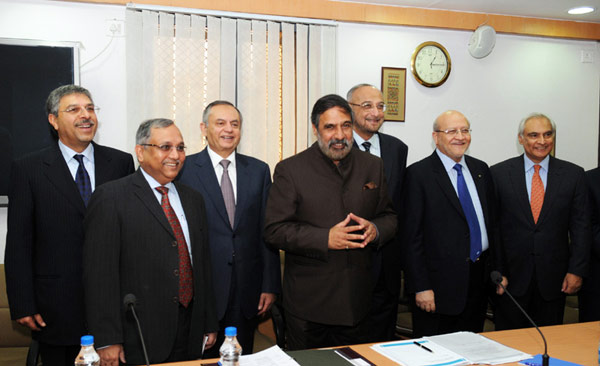 New Delhi: India is open to the possibility of bringing Indian private banks in Pakistan, said Union Minister for Commerce, Industry and Textiles Mr. Anand Sharma. He also sought both countries to continue moving forward towards a non-discriminatory trade regime.

Expressing satisfaction over the trade normalization between India and Pakistan, the Union Minister said: “Pakistan government has taken some steps to move towards full normalisation of trade relations with India by making the transition from a ‘Positive list’ to a ‘Negative list’ for imports from India. This process must be taken to its logical end by phasing out the negative list and eventually according MFN status to India.” He was speaking with a delegation of the Pakistan Business Council headed by Mr. Ali S Habib. The Minister further added that whatever perceptions that are coming in the way of moving towards further improvement should be addressed by more information and better understanding of the benefits of the normalisation.

The members of the delegation briefed the Minister regarding the issues being faced by them in their business transactions with India. On demand for more bank branches, the Minister said: “Let both the countries quickly establish the first two branches and we may also look at the possibility of expanding and bringing in some of our private sector banks. We are open to that.”

The Minister reiterated the decision taken during the meeting between the Commerce Ministers of both the countries in New Delhi on April 13, 2012 to constitute a Joint Business Council. He further added that India has already conveyed its list of prominent businessmen to Pakistan side. The Indian side has proposed Shri Sunil Munjal as Co-Chair.

On the issue of more trade routes, the Minister informed that a modern Integrated Check Post (ICP) has been set up by India at India-Pakistan border at Attari, Amritsar for trade facilitation. The ICP was operationalised on April 13, 2012. “It would be beneficial to the business communities of both sides if Pakistan allows all items not in the Negative List to be traded across the land border at Attari-Wagah,” added Shri Sharma. He also said: “We are keen on Khokhrapar – Munabao. A Joint Working Group was agreed to be set up. In our state of Punjab, they want to open more border points and also in Rajasthan connecting Sindh. I believe there is a similar desire from the Pakistan side so that other states of Pakistan are also connected.”