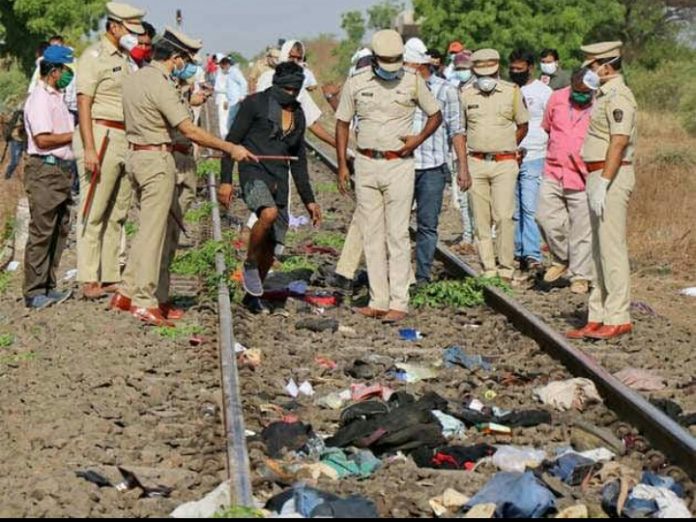 New Delhi:   In the wake of tragic death of 16 migrant workers at a railway track,  leaders of seven opposition political parties on Friday sent a letter to President of India Ramnath Kovind raising concerns over the security, welfare, and livelihood of working people during the ongoing lockdown due to pandemic.

Addressing him as “your government”, they said by nullification of the labour laws under the pretext of battling the Covid-19 pandemic India is being pushed back to medieval “barbarism and slavery”.

Opposition leaders  Sitaram Yechury (CPM), D Raja (CPI), Dipankar Bhattacharya (CPIML), Debabrata Biswas (AIFB), Manoj Jha (RJD), Dr. Thol. Thirumavalavan (RSP) and others raised concerns over the security, welfare, livelihood and future of crores of Indian working class and working people. They said the current government has shown little empathy for the poor millions as they have been worst suffers during the ongoing lockdown due to corona virus pandemic.

They underlined that the well-being of the working people is directly linked with the prosperity of entire country and its future.

Drawing attention of the President, opposition leaders said, “Using the pretext of battling the Covid-19 pandemic, drastic changes are being made to the existing labour laws of the country which further jeopardises the lives and wellbeing of the working people.”

Referring to the tragic incident at railway track in Aurangabad where a goods train had mowed down 16 labourers and injured four others, and Vizag industrial accident,   they highlighted the plight of working people.

“Already the country is witness to the most inhuman tragic dimensions of the plight of the migrant works since the national lockdown has been enforced. Far from protecting the fundamental right to life and dignity, today’s conditions are barbaric.”

Last night, sixteen migrant workers, mainly tribals, forced to walk thousands of kms back to their homes with no arrangements being made for them, were crushed to death by a goods train in Maharashtra, they added.

They alleged that, “The concern for the safety and survival of the workers is grossly neglected by “your government”. Such is the state of affairs in our country.”

On government’s attempt to change labour laws, they said it has initiated the legislative process of codifying 44 existing labour laws into four codes which is patently anti-labour and draconian.

Furthermore, the daily working hours have been increased from eight to twelve hours through executive orders in various states like Gujarat, Madhya Pradesh, Haryana, Himachal Pradesh, Rajasthan and Punjab without amending the Factories Act.

The fundamental right for the workers to organise themselves into unions is also being gravely threatened.

“Diluting labour rights seems to be the logic employed by “your government” at the centre and by some state governments, rather than concentrating on fighting the pandemic by augmenting our health facilities and protecting our doctors and health workers and taking care of the people’s requirements,” opposition leaders underlined .

They noted that 14 crores of workers have lost their jobs since the lockdown began but the government has done very little to look after them.

Opposition leaders reminded the President that workers under the Indian Constitution are not slaves and reducing them to this status is not merely a violation of the Constitution but its nullification.

“Instead of moving towards a vibrant modern secular democratic republic, India is today being pushed back to medieval barbarism and slavery.”

Leaders urged the President to be true to the oath  he has taken  at the time of assuming office of the President of India and  to urgently intervene to stop such naked savagery against the working people.