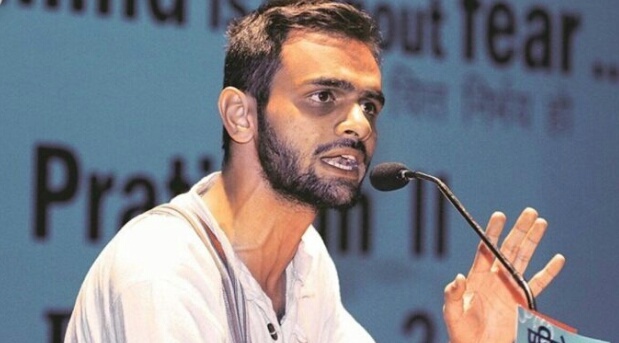 New Delhi : Condemning the arrest of former Jawaharlal Nehru University student leader and anti-CAA activist Umar Khalid, opposition parties announced on Monday that they will raise the issue of arresting anti-CAA activists in the ongoing monsoon session of the Parliament which begins today. A group of academics, rights activists and lawyers also condemned Khalid’s arrest and accused Delhi Police of ‘witch hunt’.  Defending his son, Khalid’s father, Dr S Q R Ilyas said the police allegations against his son are a ‘complete and total fabrication”.

The main opposition Congress expressed grave concern over the manner attempts have been made to suppress the voice of dissent.  Party MP and former Union Minister Jairam Ramesh said the issue of Delhi Police naming CPI (M) Sitaram Yechuri and other leaders in the supplementary charge sheet for the Delhi riots would be raised in Parliament.

“Hundred per cent, we will raise this issue of Charge sheeting of political leaders, social activists, intellectuals, NGOs in the Parliament. This is a deliberate attempt to muzzle dissent and debate. This is anti-democratic and authoritarian step.”

Hesaid Congress has been in touch with all like-minded opposition parties and evolving a common strategy in raising many issues during the monsoon session.

CPI (M), largest constituent of the Communist bloc, also said it will raise the issue in Parliament.  It said the arrest of Umar Khalid under the provisions of the draconian UAPA is condemnable.

It came down heavily on the Modi regime saying top BJP leaders including Anurag Thakur, Kapil Mishra   who made hate speeches and incited violence are protected by the Central Government, while young peaceful protesters against the CAA are being targeted and arrested citing the “utterly manufactured version” of the country’s Home Ministry and the Delhi

“Police linking anti-CAA protests with communal violence. The Central Government must stop the practice of the Special Branch summoning anti-CAA activists for questioning and trying to coerce them into implicating those targeted by the Home Ministry and the Police.”

It also lambasted the use of UAPA against the activists.

“The use of UAPA is to block the normal processes of justice by which they would have been out on bail since, as many of the lower courts have mentioned, there is not a shred of evidence against any of them for inciting violence.”

The arrests constitute an assault on the constitutional guarantees of the democratic right to dissent; it said and reiterated that strong opposition to the CAA-NRC-NPR.

Expressing solidarity with all those facing the repression of the Modi government, the CPI (M) demanded the release of all those arrested under UAPA in the Delhi communal violence case.

“Recent developments point to the urgent necessity of, under a retired judge, into the causes of the violence as against the biased investigation being conducted by the Delhi police under Union Home Ministry’s guidance.”

Meanwhile, Khalid’s father Ilyas asserted that police have no evidence against Khalid to make any case under the charges of sedition and unlawful activities.  He told Muslim Mirror that the draconian law was invoked against Khalid him just to make it difficult for him get bail and prolong his detention.

Delhi Police Special Cell arrested Khalid late on Sunday night after 11 hours of interrogation who was sent to 10 –day police custody by a Delhi court today.  Dr Ilyas, who is president of the Welfare party of India, said that he was not allowed to meet his son.

Expressing solidarity with Khalid, a group of activists issued a statement saying, “As citizens deeply committed to constitutional values, we condemn the arrest of Umar Khalid who has been subjected to a malicious investigation targeting peaceful anti-CAA protestors.”

Describing Khalid as “one of the hundreds of voices that spoke up in favour of the constitution across the country during these anti-CAA protests, always foregrounding the need for peaceful, non-violent and democratic means”, the statement which was signed by Ravi Kiran Jain and V. Suresh of the Peoples Union for Civil Liberties, lawyers Mihir Desai and N.D. Pancholi, academics Satish Deshpande, Mary John, Apoorvanand, Nandini Sundar and Shuddhabrata Sengupta, and rights activists Aakar Patel, Harsh Mander, Farah Naqvi and Biraj Patnaik.

They also  pointed out how the young men have been targeted by the Delhi Police:

“It is very significant that of the 20 arrested, 19 are under the age of 31. Of which 17 have been charged under the draconian UAPA and have been imprisoned on charges of a conspiracy for the Delhi violence whereas those who actually instigated and participated in the violence has not been touched. Of the ones incarcerated, five are women, except for one all are also students.