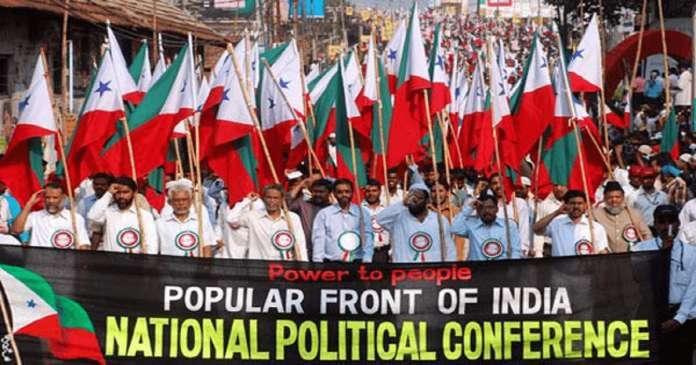 On Friday, several PFI state officials’ and activists’ homes across Kerala were the target of attachment actions by the state revenue authorities.

At least 202 properties, including numerous houses, shops, and offices were attached by government officials in all of Kerala’s districts. The attachment processes are expected to be finished by Saturday, according to the administration.

Approximately 15 locations across the state were the sites of attachment proceedings by the state revenue authorities at the homes of PFI state officials and activists.

A team led by ADM Shaju NA attached the properties of 14 former PFI leaders in the Wayanad district in the villages of Edavaka, Mananthavady, Vellamunda, Anjukunnu, Nalloornadu, Muttil South, Nenmeni, and Kuppadithara.

The land and property of Chandragiri Charitable Trust in Kasaragod, which housed the PFI district committee office, would be seized.

Furthermore, actions have been taken to collect the assets of N U Abdul Salam of Nayanmarmoola, Ummer Farooq of Alambadi, Sirajuddeen of Nangarath, Hosdurg Taluk, and PFI former district president C T Sulaiman of Thrikkarippur.

According to the revenue officials, these individuals’ assets have been located, and further action would be conducted on Saturday. 23 people in Kozhikode have received notices for attachment from the government, who expect the procedure to be finished by Saturday night. The authorities would seize 124 people’s assets in the Malappuram district.

On September 27, the High Court issued a ruling mandating that PFI leaders and activists charged with involvement in the hartal violence incidents be held accountable for the damage. During the Kerala flash hartal on September 23, there was a total loss of public property, primarily transportation vehicles, that was estimated to be worth roughly Rs. 5.2 crore. The widespread crackdown on the group was the reason the hartal was called.