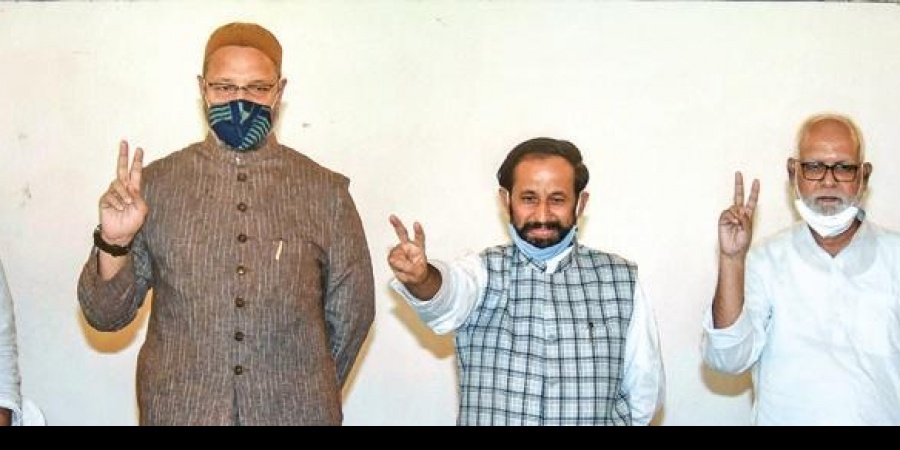 Patna, September22(IANS):  The announcement by the All India Majlis-e-Ittehadul Muslimeen (AIMIM) Chief Asaduddin Owaisi to form the United Democratic Secular Alliance (UDSA) with former MP and Samajwadi Janata Dal (Democratic) Chief Devendra Prasad Yadav for the upcoming Bihar assembly elections has given an interesting turn to the battle at the hustings.

With Owaisi and the SJD (D) entering the poll arena in Bihar together, the political fight won’t be easy for any of the parties in the Seemanchal region of the state.

Forging an alliance with Devendra Yadav’s party, Owaisi has made a political move to play a spoiler of votes for the Yadav and Muslim voters of Bihar who are considered the traditional pocket boroughs of the Rashtriya Janata Dal (RJD).

Though the UDSA has not yet decided on the number of seats it will contest in the Assembly elections, it is believed that the alliance will field their candidates in Kosi and Purnia regions.

The Muslim vote will supposedly be decisive in 15 to 17 seats in Seemanchal but there are many other constituencies where Muslim voters could influence the poll results.

In the 2015 elections, Owaisi’s party had fielded candidates for six seats and all of them suffered resounding defeats. On five seats, his party candidates lost their deposits. However, in 2019 the AIMIM’s Qamrul Hoda won the Kishanganj seat in the Bihar bypolls.

Political expert and senior journalist from Kishanganj Ratneshwar Jha opines that in the wake of the alliance by Owaisi and Yadav, it is certain that there will be a split in the Yadav and Muslim votes to the disadvantage of the RJD.

Jha says, “The voters who will be targeted by the UDSA have been considered to be the vote banks of the Opposition grand alliance (Mahagathbandhan) so the number of votes that UDSA gets will only harm the Mahagathbandhan.”

Owaisi’s poll campaign has always been aggressive and polarising so it would not be surprising if he swings voters in his favour from other areas of Bihar as well.

RJD spokesman Mrityunjay Tiwari denies any political threat from the AIMIM-SJD (D) alliance, saying, “There is a direct political fight between two ideologies in Bihar. Apart from this, whichever party is contesting this election and at whose behest they do so, the people of Bihar know it well. Whichever party tries to weaken the political fight against the BJP, the people of the state will give them a befitting reply.”

The RJD may reject the UDSA but it will surely make a dent in the Muslim and Yadav vote banks. In the Muslim-dominated areas, Owaisi could field his party candidates which might pay the BJP political dividends. It is certain that not all Muslims will vote for Owaisi and there will be a split in the community’s votes.

On the AIMIM-SJD alliance giving the BJP a political advantage, party spokesperson Dr Nikhil Anand said, “Leaders like Owaisi are always trying to garner Muslim votes through the politics of appeasement by invoking the sentiments of the community. The people of Bihar clearly understand the ideology of such leaders.”

He said the National Democratic Alliance will defeat those parties who play politics on the basis of religion and caste. This election will be fought on the plank of development in Bihar, he added.