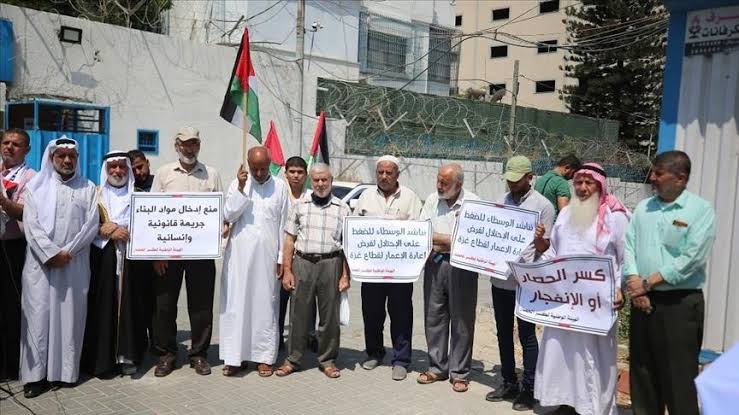 GAZA CITY, Palestine: Scores of Palestinians staged a rally in Gaza City on Sunday to demand an end to Israel’s years-long blockade on the Gaza Strip and rebuilding the seaside enclave following a recent Israeli onslaught.

“The unreasonable procrastination to rebuild our destroyed homes aggravates the suffering of Gaza residents, who are living under siege for the 15th year in a row,” Hamas leader Hammad al-Reqeb told the rally.

He called on the United Nations “to practice its role in supporting the oppressed…and stand by the Palestinian people”.

Hamas and Israel engaged in 11 days of fighting in early May against the backdrop of an Israeli court verdict to evict Palestinian families from their homes in Sheikh Jarrah neighborhood in occupied East Jerusalem.

At least 260 Palestinians were killed and thousands injured in Israel’s bombardment of the blockaded territory that left a vast trail of destruction. Thirteen Israelis were also killed by Palestinian rocket fire from the Gaza Strip. The fighting, the fiercest in years, came to a halt under an Egyptian-brokered cease-fire on May 21.

While Israel made the release of four Israelis held captive by Hamas a prerequisite to allowing the Gaza rebuilding, the Palestinian group rejects any link between the two issues, saying that it will only free the Israelis in exchange for Palestinians held by Israel.

An estimated 4,500 Palestinians are believed to be held in Israeli prisons, including 41 women, 140 minors, and 440 administrative detainees, according to data compiled by organizations on the rights of prisoners.

​​​​​​​Israel has imposed a crippling blockade on Gaza since 2007, badly affecting livelihood in the Palestinian territory.-AA