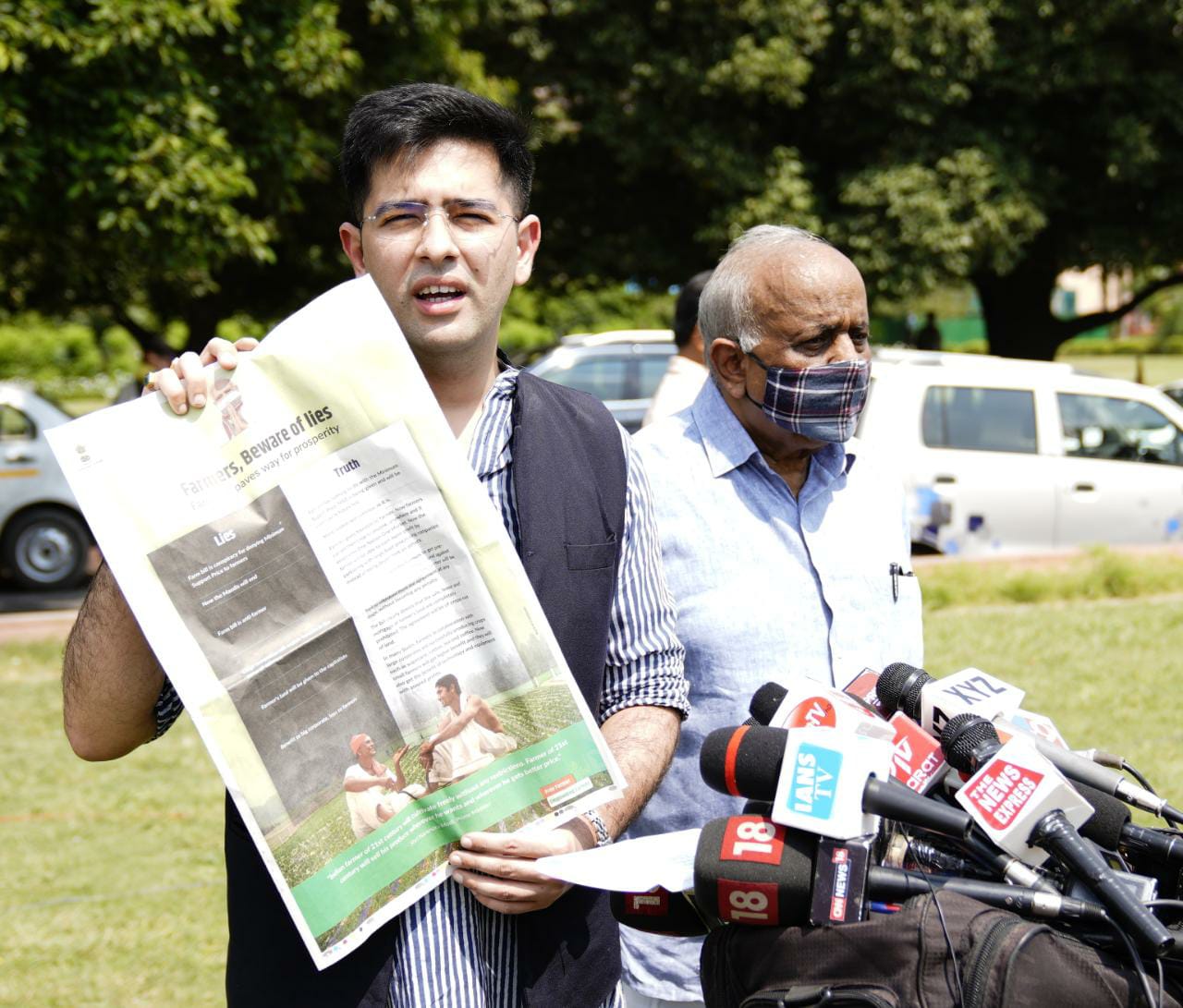 New Delhi: Aam Aadmi Party on Monday said by giving advertisements in the print media on the farmers bills in English, the Prime Minister  Narendra Modi- led Central government has established a new “record of false propaganda”. The party alleged that Parliament is being run on dictatorship and not on democracy. It also said the party MP, Sanjay Singh’s kurta was torn off and Marshall grabbed his leg in the upper house of Parliament.

Addressing the media, AAP national spokesperson and MLA, Raghav Chadha alleged that the “false propaganda” of the PM has been exposed after an advertisement on the recently passed farmer bills in the Parliament was published in leading newspapers in English today.

On  one hand, BJP-led MCDs are not able to pay the basic salaries of the doctors and nurses in these times of Corona, and on the other hand, they are spending lakhs and crores of rupees on an ad which is published in English to make farmers understand MSP, PDS, and public procurement, he added.

He further said the government has set a new record of “brightening” their faces with the hard-earned money of the common taxpayers.

“They are trying to explain the MSP and the MSP PDS system in India to the distressed and oppressed poor farmers and workers in the English language. Please tell me, which farmer in India would read this newspaper and ad with his morning cup of cappuccino, and understand the MSP?” He asked.

I want to question the Centre, out of 62 crore farmers and workers in the agricultural sector in India, who are the people who would read this ad in English?

Quoting the 2015-2016 agricultural survey that around 80 percent of farmers in India have less than 2 acres of land, he said, “Those farmers cannot even carry their produce from their villages to other villages for selling.

We want to warn the BJP, and the PM, the way you have tried to rob and deceive the farmers, they will also make you repent your bad deeds from the streets to the parliament, he said.

Party Rajya Sabha member, ND Gupta, who flanked Chadha, also addressed the media. He said, “I was an eye-witness to what happened in the Parliament. The timings of the Rajya Sabha are 9 AM-1 PM, and the Cabinet Minister was speaking. The Deputy Chairman of the Rajya Sabha said that after 1 PM, he is moving the file ahead based on the unanimous decision of the House. Leader of Opposition Ghulam Nabi Azad contested that only the BJP would agree to this decision and the opposition did not agree. It has been a tradition of the House that whenever the time has to be extended, the majority of the House has to agree to the extension. But the Deputy Chairman extended the timings of the House. Every bill is passed through voting, first, several amendment clauses are voted on, and then the main bill is considered.

Gupta further pointed out that the opposition demanded voting on every amendment clause but the demand for division of voting was not accepted and all the clauses were passed.

It is mentioned in the rule book of the Rajya Sabha, that even if one out of 250 members of the House demands division of voting, the House has to agree to it.

The demand for division of voting was again raised during the passing of the main bill, but the demand was rejected.

Firstly, there was no unanimity on extending the House but it was done. Secondly, the bill was passed rejecting the request for a division of voting.

He alleged that the House is run by this type of dictatorship. The present members protested this unruly decision, and they were heckled by the Marshalls.

Sanjay Singh, who is the MP of our AAP, was heckled, his kurta was torn and he was pulled by his feet, he added and said because of this reason the 8 MPs who have been suspended are on a protest in the Parliament.

The House specified today that there are two types of arrangements, motion, and resolution.  Leader of Opposition, Ghulam Nabi Azadi moved a motion, and Prof Ram Gopal Yadav also moved a motion, requesting the suspension of the MPs to be revoked. The Chairman demanded a resolution and not a motion.

Gupta said the long term members of the House are being subjected to this kind of dictatorship.”

He underlined that the ruling party brings in ordinance before every bill, despite there being many rules and procedures in the House and 24 committees.

The opposition demanded this bill be sent to a select committee because this is a serious issue concerning the 70% population that depends on the agricultural sector. The GDP has contracted to -24%, and if the agricultural sector had not contributed to the economy, the GDP would have gone down further, Gupta added