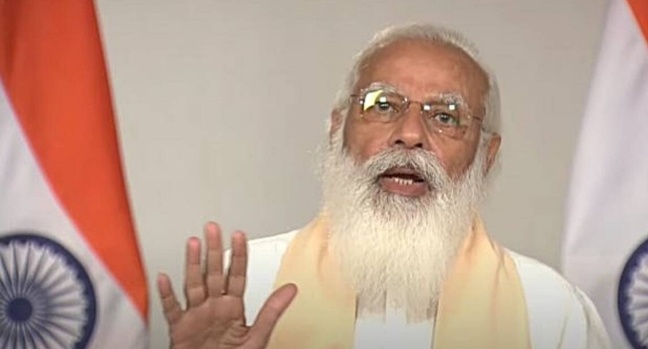 New Delhi : Main opposition Congress severely slammed Prime Minister Narendra Modi’s today’s address to the nation on the surging pandemic in the country terming it “nothing but empty talk”.  The devastation being caused by the second wave of pandemic has exposed ineptness of the Modi government in tackling this human tragedy.

Modi is addressed the nation on Tuesday and spoke about the prevailing Covid-19 situation in the country. He said the situation in India was under control until some weeks ago, but the second wave of Covid-19 has come like a storm.

Congress senior leader and former union minister Ajay Maken said PM Modi’s addressed at a time when India is seeing an exponential spike in its Covid-19 cases, while deaths too are increasing. He said the crisis has exposed the Modi government’s rhetoric.

“The Nation is going through an unprecedented and deadly crisis. It is taking days to first get the tests conducted and then the results take another two to three days, he said.

Even as there is an acute shortage of everything from hospital beds to oxygen to medicines to vaccines but the address did not touch these issues in detail.

Maken underlined that there are no beds in the hospitals, those hospitalised are not able to get life saving drugs or something as basic as Oxygen.

Referring without taking the names of some BJP leaders from Maharashtra, he said  common drugs are being black marketed and most hospitals in the country have just hours of Oxygen supply left. People are dying in queues and on streets-crematoria and graveyards can’t accommodate the people dying.

Recalling the last year migrants’ crisis due to sudden lockdown, Congress leader said migrant labour is yet again forced into reverse migration as state after state is being left with no option but imposing a Lockdown.

The PM addressed the nation in the middle of a full blown catastrophe. He was expected to tell the nation as to what has the Govt done in terms of increasing beds in hospitals, increasing Oxygen output and streamlining supplies, making drugs like Remdesivir and Tocilizumab available, increasing the number of Ventilators and enhancing vaccination, he asked.

Taking a swipe at the PM, Maken said the PM chose to relinquish all his responsibilities and put the onus of saving India on NGOs, Youth and Baal Mitras.

“He put the onus of doing whatever little possible on State Governments and that also by practically advising them to not implement Lockdowns,” congress leader said.

For several days now, India has been recording more than 2 lakh fresh coronavirus cases every day. The active case tally has crossed the 16 lakh-mark and several states have reported shortage of ICU beds, ventilators, and medical oxygen to treat Covid-19 patients.

Because of this PM Modi and party colleagues are being criticized by several quarters and they are asking the government to stop indulging in politics and address crises triggered by the second wave of COVID.

BJP led Uttrakhand government’s decision of allowing the kumbh mela at Haridwar and when the damage has already been done the PM making that Kumbh should be symbolic.

Noted historian and political commentator Ramachandra Guha said Modi’s leadership style is the principal reason for the mishandling of the present COVID-19 crisis.  In a hard-hitting and sharply critical interview to the Wire, Guha also blames Modi’s “sycophantic cabinet”, the country’s institutions, including the Supreme Court, which has let down the country and the yes-men officials and bureaucrats who Modi has surrounded himself with, he says the main blame and responsibility rests squarely on the prime minister’s shoulders.

Another commentator Dr Arun Mitra said that “It was sickening to hear the Prime Minister saying in his speech on 25 March 2020 that we had won Mahabharata in 18 days and will defeat COVID in 21 days. Such unscientific speeches led to complacency in society. These types of gimmicks were repeated from time to time.

Mitra  said many myths were also spread about treatment of COVID such as “People were advised to drink cow urine as a cure and the use of ‘Panchgaya’ which is a mixture of cow dung, cow urine, milk, curd, jaggery, ghee, banana, tender coconut and water was propagated to be effective.

Such absurdities were spoken by several leaders including the chief of West Bengal BJP, he added.

46 % of Indians perceive news coverage of PM Modi as biased