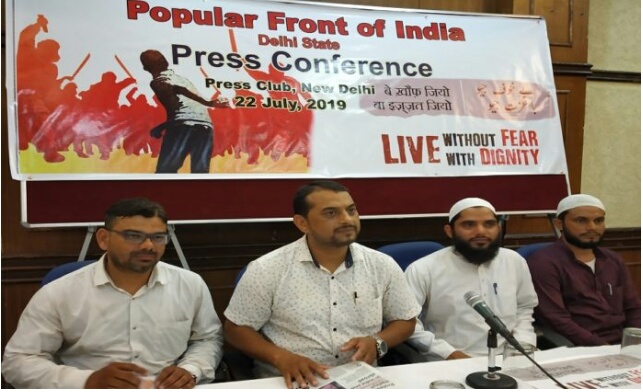 New Delhi :   Since last  the Delhi police, which is controlled by the Ministry of Home Affairs and the Uttar Pradesh police, which were not taking effective steps to prevent the lynching incidents, have been targeting the Muslim youths for holding peaceful campaigns. They are being harassed for involving in Popular Front national campaign ‘Live without Fear; Live with Dignity’. Such harassment is nothing but the strangulation of constitutional rights and democratic process of the citizens.”, said Muhammad Pervez Ahmad, Delhi State President of Popular Front of India said in a press conference held here on Monday at the Press Club of India, New Delhi.

“No where in modern history have we heard people violently motivated by their religious beliefs going after innocent people and beating them to death for the alleged sin that they are either eating beef or keeping cows.

After BJP came to power in 2014 around 180 major and 33 minor crowd assaults have taken place in which more than 50 people have been killed in broad day-light. Some met with a horrible death like burning alive. About 56% of them were poor Muslims.

After Modi government came to power at the centre for second time and Amit Sha as Union Home Minister the lynching incidents against Muslims and downtrodden were not stopped; street violence has turned more loathsome. In the tribal state of Jharkhand recently a young man called Tabrez Ansari was brutally murdered by Hindutva criminals. Malum Ansari, Alimuddin Ansari, Marlaja Ansari, Wali Khan and the list goes on. Tabrez Ansari was attacked by the mob, beaten mercilessly for hours and was forced to chant Jai Shri Ram and Jai Hanuman.

It shows that a free signal was given to the right wing goons in the different parts of the country and the lawlessness continues to prevail. Even after the directions from the Supreme Court, the Modi government is neither ready to curtail the lynching incidents nor pass any law in the Parliament. Such attitude of the central government created a fear psychosis among the minorities.

It is the duty of the governments either at the Centre or States to obey and act as per the frame work of the Constitution of the Republic, which is absent at oresent. Constitution is the contract between the government and the citizens. It is the Constitutional guarantee of the State to Protect its citizens and let them live with dignity. Unlawfully constructed fear among the citizens not only evades their lives; also the dignity. It is the duty of the social organizations to make people aware about their rights.

In such a situation, Popular Front of India launched nationwide campaign with the theme of “LIVE WITHOUT FEAR’ LIVE WITH DIGNITY”. We conduct poster campaigns, hand bill distribution, street corner meets, seminars and public meetings all over India.

After pasting posters in Delhi and Uttar Pradesh, both police has started harassing the Muslim youths and members of Popular Front. They foisted false cases in Shamli and Meerut and arrested two persons. Delhi police is coming to our office frequently in the name of inquiry. Occasional visits of the officials to our offices are not being objected by us. But disturbing the day-today affairs of the office management is not justifiable.

When we filed the bail application before the Shamli SDM court after one person was arrested for campaigning, the SDM didn’t hear the matter so far and dragged on the proceedings. In Meerut, sec 295 of IPC invoked for the poster message. We wonder whose religious sentiment was hurt in this message.

What is the illegality in our poster message? Is it a crime to entertain the people to live without fear with live with dignity? When we ask the people to live without fear, why the saffron governments and their police getting disturbed on this message. If it so, one has to see the nexus of the governments and police with the perpetrators of the hate crimes.

Through this campaign, we call upon the civil society to come out against lynching. India’s silent majority should come forward to prevent the people behind these mindless, violent crowds, working with political support as we have witnessed in many north Indian states. We should use legally permissible methods to stop the communally frenzied goons.

Rule number one to stop mob lynching is to give up the fear of the crowds. Muslims, Dalits, Christians and other people living in fear have to restore dignity of their existence through effective networking and cooperation. Indian Penal Code doesn’t have proper provisions to punish the lynching crowd. Pressure should be build to enact new laws which make it mandatory to punish street fighters who commit murder and arson. People have to evolve effective legal plans to bring the goons to book, and to evolve local strategies to prevent the forces working behind the mobs.

We are in the field of democratic process and legal means. So we call upon the police and the governments at the Centre and the Uttar Pradesh to stop harassing and targeting Muslim youth and our organization for conveying this great message of dignity. We also appeal the media to expose the injustice; be with the message of this campaign and help minorities and downtrodden to live without fear and live with dignity”.