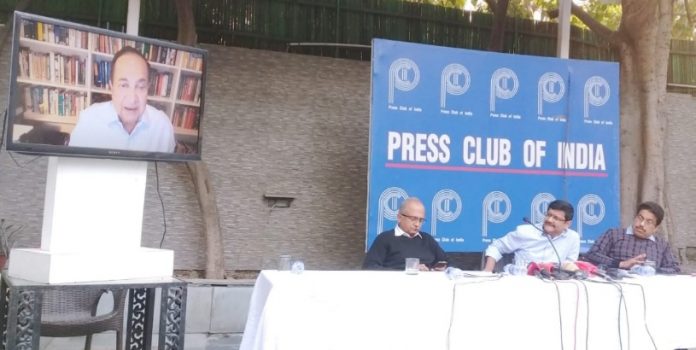 New Delhi:  Politicians, lawyers, journalists and activists on Monday denounced the ban imposed on popular Malayalam TV news channel MediaOne by the BJP-led union government on ‘absurd ground’. They also took exception to the Kerala High Court interim ruling saying it lacks legal reasoning and warned that if the Supreme Court accepts the “sealed cover” envelope in the case, it will be the last nail in the coffin of free media.

Addressing a press conference at the Press Club of India, Supreme Court senior advocate Prashant Bhushan accused the government of using different tactics to bend the free media in the country. He was critical of the Kerala High court single bench for not showing the reasons behind the ban on the MediaOne channel.

“If  the Supreme Court accepts the “sealed cover” envelop in the case of  MediaOne – as the Kerala High Court single-judge bench did, it will be the death knell for free media in the country,” he warned.

Echoing his views, N. Ram, the former Editor-in-Chief of The Hindu, said “The Home Ministry sending its report to the Kerala High Court in a “sealed cover” without transparency, according to the prominent journalist, had completely breached natural justice principles and was not acceptable at all”.

He expressed the hope that the court will eventually provide justice in the MediaOne case for the sake of press freedom and the well-being of hundreds of TV station employees.

Online speaking from Chennai, N Ram called the BJP government’s actions against the channel an “attack on citizens’ fundamental right to free expression and liberty.”

The presser was convened by the MediaOne management to bring the attention of countrymen and released a joint statement signed by MPs, activists and journalists demanding  removal of the ban. Channel editor Parmod Kumar presented the reasons offered by the federal government for the suspension of news and current affairs broadcasts on the MediaOne channel, which began on January 31 of this year. He said the government’s reasoning was not based on any solid ground as it never got a show cause notice since its inception in 2013.

Continuing his address, Prashant Bhushan recalled that The Rafael deal and the judge B H Loya murder case were determined by the Supreme Court based on investigation findings delivered in “sealed envelopes.” However, it was eventually revealed that the Rafael deal information on the sealed cover was false.

Calling it a dangerous trend and against the spirit of natural justice, the noted advocate said this trend was begun during the tenure of chief justice Ranjan Gogoi.

“New jurisprudence based on sealed envelopes amounted to gross violation of natural justice because it lacked transparency. Hence, it needs to be uprooted lock, stock, and barrel.”

“He was surprised why the information in “sealed envelopes” in the Rafale deal and the Judge Loya murder case was allowed to pass muster”, said Bhushan.

In the instance of MediaOne, the same thing happened. In this case, the government cited the “national security” provision, and the Home Ministry submitted its response to the Kerala High Court in a “sealed cover” without providing a copy to MediaOne’s management, he observed.

Bhushan said that the Home Ministry had relied on “intelligence inputs” that there might be a “security breach” if security clearance was given to Mediaone, permitting it to transmit news.

“This is a gross violation of natural justice, and if the Supreme Court accepts this “sealed cover” report, this will signal the end of free media in India.”

Bhushan stated that the government might use MediaOne as a test case to shut down independent media, which he believes should not be allowed. He said, however, that just because the administration cited national security grounds did not mean it would survive legal examination.

“Canceling MediaOne’s licence is an attempt to cast doubt on minorities’ role; it is an attempt by the executive branch to exert pressure on minorities; it is a violation of the fundamental right to freedom of speech and expression.”

He also contended that “cancelling the Channel’s transmission rights amounted to a targeted attack on the 210 million-strong Muslim population, and that the government was powerless to stop it and they can’t be silenced.”

“The arbitrary act of the MHA amounts to a violation of the freedom of speech and expression guaranteed under Article 19 of the Constitution and also represents a clampdown on broader press freedom in India.

We are also extremely disappointed by the decision of the single-judge bench of the Kerala High Court, which refused to overturn the cancellation of MediaOne News’ license by MIB & MHA and protect the fundamental Right to Freedom of Speech and Expression.

The decision of the single-judge bench was based on a ‘sealed cover’ envelope provided by the MHA, the contents of which were not shared with MediaOne News,” the statement pointed out.

This goes against the basic principles of natural justice, which mandate that material evidence in any adjudication process, and especially in a matter concerning fundamental rights, must be shared with both parties to the dispute.”

The joint statement alleged that “the court failed in its bounden duty as a constitutional court by not providing the reasons behind its judgment, and instead of reiterating the line of the MHA regarding ‘Intelligence inputs’ and ‘national security concerns.”

MediaOne was given a license for ten years on September 30, 2011. However, its renewal application was rejected by the Ministry of Information and Broadcasting because of the denial of security clearance by the Ministry of Home Affairs on January 31, 2022.