Jaipur, Rajasthan: The sweltering heat and palpable temperature could not deter, for a moment, the mammoth Muslim crowd which had swirled at the historic Kerbala Grounds, in Jaipur, Rajasthan, on June 12, in which according to conservative estimate, more than two-hundred thousand men and around fifty thousand women had congregated to share the spirit of ‘Peace and Justice’ conference, something which the whole nation is scurrying for! More particularly so, when there is a renewed storm brewing over Gyanvapi Mosque, Benarus (UP) and also around the vituperative remarks against the Prophet of Islam by members of the ruling party (BJP).

It was by no means a yeoman task as people, cutting across all economic/social status etc, had to beat-the-heat as the whole town gathered towards the venue on the call of Joint Acton Forum of Rajasthan, for the buzz was only to reach the site at the earliest.  The first to speak was Kumar Kale, President BAMCEF, who presented the data about women from Dalit background being ‘raped and killed’ almost on a daily basis. He lamented about the hundreds of such cases which go unreported. 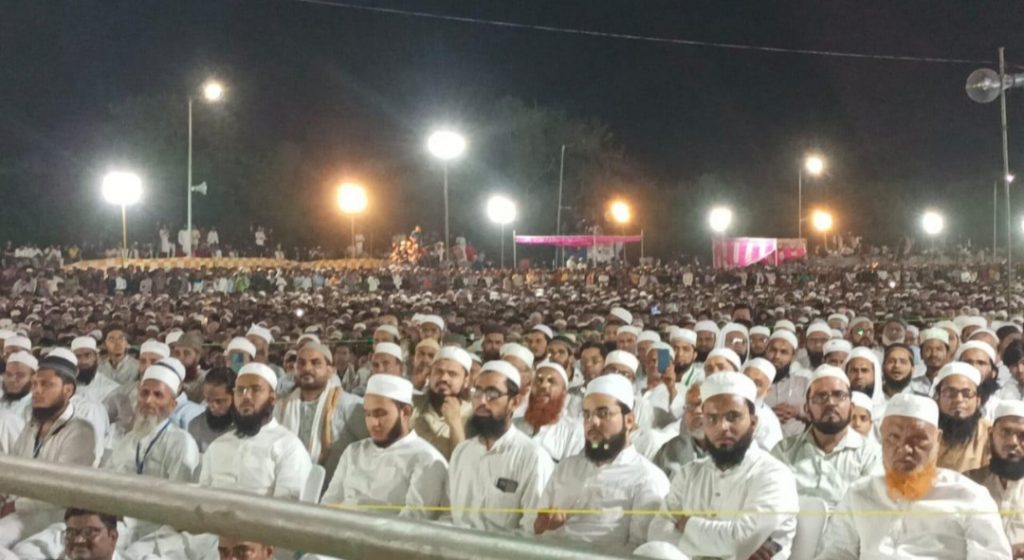 The “stress for unity” between Hindus and Muslims was very forcefully put forward by Raja Ram Meel who is also the President of Jaat Mahasabha. KC Ghumarya, the State President of Bhartiya Adivasi Vikas Parishad, laid emphasis that all deprived sections of society, including Dalits, Adivasis, Muslims and other minorities are now to become a unified force, as such sections are natural partners into the struggle for equal rights, which are now being snatched in the otherwise world’s largest democracy. He also emphasized that the policy of the state is now to soon evict the real inhabitants from the jungles and let the land be lavished to the Corporate Houses. 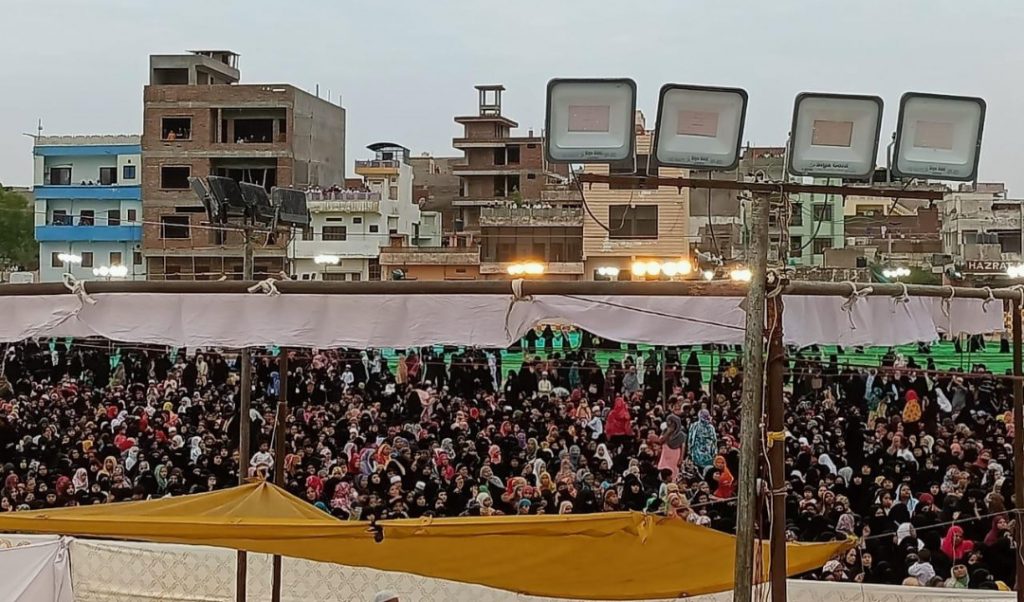 The whole scenario ranted the air with loudest call for Allah Ho Akbar ( Allah is Greatest) in waves from one end to the other. The programme was truly in rhythm with its cusp and cadence, with no rhetoric, as speakers one after the other echoed the sentiment as to how nation is in desperate need for Peace and Justice-in togetherness. Anees Ahmed, the general secretary of PFI took the occasion to highlight that the presence of Muslims in such large numbers, as a glaring example that Muslims can never be cowed-down by any injustice. He called for the martyrs of Ranchi ( Jharkhand)  like Mudassir and Suhail, who have now become history to have laid down their lives for the Honour of Prophet, and exhorted that if Muslims houses are safe, it is for the sacrifices of the likes of Afreen Fatima, whose house has been reduced to a rubble by the administration in Pragyaraj (UP).

Syed Sadiq Hussaini who has been in the forefront of unity-amongst-Muslims, Mufti Haneef Ahrar Vice President of  All India Imams Council and Ahsan Badr of Jamiat Ahle Hadees, echoed the sentiment that the current scenario in the country makes Muslims to ‘strive for their rightful place’ enshrined in the Constitution and that such efforts will never cease, despite the uphill and desperate situation lurking in the nation. Tauqeer Raza Khan from Bareilly (UP) likened PM Narendra Modi to Ramayana character Dhritrashtra, who had tied a black strip around his eyes to ‘not to see’ the nation descent into chaos.
The conference was presided by Maulana Khalil-ur-Rehman Sajjad Nomani, the last speaker, who is his around one hour address took to the rapt attention of audience, that the policies of intimidation into communities are being grilled but all such efforts will meet their dead end as the ’peace-and-justice’ is near to prevail, as history is replete with examples that ‘extreme-conditions of tyranny’ are always in vogue before peace and tranquility take place, and which is all very likely to happen in near future.  He took the occasion to quote from Holy Quran, in which the condition to ‘return’ to injustice and falsehood, or else be banished, was put to Prophets, and which is all what is prevalent today! But Prophets did not comply and always led the march towards equality, peace and justice! Such is what is to be the hallmark of every Muslims.

He quoted from Maulana Muhammed Ali Jauhar, who has chronicled ‘ Qatl-e-Husain asal me.in Marghe Yazeed hai/ Islam Zinda hota hai harr Kerbala ke baad ( The murder of Imam Husain is the death of Yazeed in reality/ Islam resurrects after every Kerbala) to the great applause of  audience who had all got collected to resonate the sentiment of Kerbala, out of the atrocious circumstances in the country today.  He also referred that ‘after of the worldwide campaign’ against Prophet of Islam, ironically, it has led the whole world to gravitate towards Prophet Muhammed, as United Nations and UN Security Council is also referring about Prophet  of Islam in their statements, and that, the nefarious agenda of all anti-Islam forces is bound to collapse as it is only the agenda of Allah which will prevail.

He later exhorted Muslims to undertake the cause of Prophet of Islam by being best into health and hygiene, manners, society, to poor and downtrodden, towards neighbours rights, orphans, dispossessed and deprived, farmers, labourers, patients, debtors and prisoners etc and exemplify the lines laid down by the Prophet of Islam, to ultimately win the hearts and minds of the people across the whole globe, regardless of religious-faith, caste or creed.  He made special emphasis to women audience to undertake efforts and scholarship to learn and discern the teaching of Hazrat Ayesha, the wife of Prophet of Islam, about how she had undertaken the task for the spread of Islam, and that our girls make her and Fatima Zehra, Prophet’s daughter, be their ideals in their walks of life.

He referred to the great poet of Urdu literature Akhter Sheerani, who was once in his cups, and was asked to comment on Prophet, but instead that shook Sheerani to his spine and which led him to shun liquor and instead take to a life in accordance with the principles of Islam.  He would then delve that it is time for Muslims to convert the ‘challenges into opportunities’ the same way the nuclear wrecked Japan later became a pioneer nation.

He reflected on his visit to Jaipur in 1993, in the aftermath of Babri Masjid demolition, in which a function on ‘life-of Prophet’ was organized and thousands of non-Muslims had attended to it, including the Ex. CM of Rajasthan Bhairon Singh Shekhawat. In the same BS Shekhawat had wanted to know that despite the institution of Zakat (economic-help) system how come Muslims remain poor? “It is well above 1 am in the night when I offered an reply that those who are liable to offer Zakat are firstly not doing it, and secondly the way Zakat is ought to be disbursed is also not being followed, as the objective of this ‘economic help’ is to assist the individual become empowered to ‘fend-for-oneself’ and not to offered with it in perpetuity.  I also had asked BS Shekhawat to embrace this form of Islamic injunction to help eradicate poverty in India. ” He also challenged those urchins who are now down to snatch the Hijab of Muslim women to do the same in Rajasthan where it is an intrinsic part of culture that women move with their head and face covered.

Sajjad Nomani, cautioned that peace can never occur unless justice is implemented and this is what should be the forte of our nation but the worst part is that ‘Corporate’s wealth’ has increased manifold, even during Corona-period while India has slid much lower on its poverty scales! And, today instead of up-scaling India on its economic-ladder there is a mad race, which is nothing but ‘intellectual bankruptcy’, to unearth a Shivling from beneath centuries of old mosques! He applauded the efforts of law enforcing bodies and police apparatus, whose men and women brave the scorching sun to provide security to us and also to our army-men who save our nation. The programme was anchored by Manzoor Ali Khan and vote of thanks was offered by Akhlaq -ur-Rehman.

The best part of the overall show was discipline as thousands of volunteers cordoned-off the whole area by their ‘hand-in-hand-human-chains’ to help women walk back to their homes.  It is relayed live on Pal-Pal News, Millat Times and Tahaffuz-e-Deen, India apart from dozens of media channels.

***
The writer is a former UP State Information Commissioner and writes on political issues.