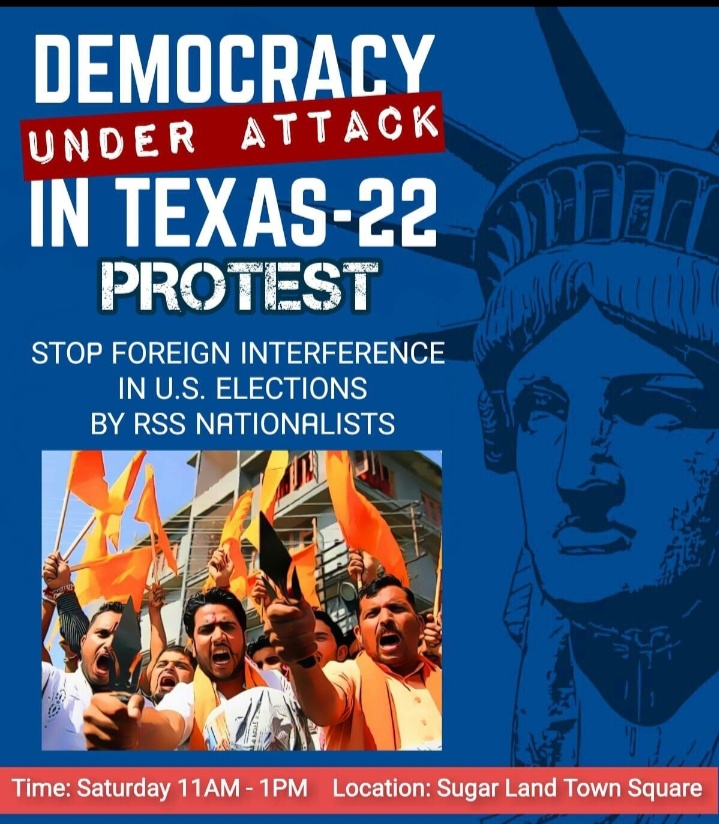 Washington DC:  Condemning Indian interference in the US presidential elections, an inter-faith coalition of civil rights activists and allies announced that they will hold a protest demonstration at Sugar land town square in Texas on Saturday.  Activists and coalition said they are deep concerned with the Democratic candidate Sri Preston Kulkarni who has ties with the Indian organization Rashtriya Swayam Sewak Sangh (RSS).

RSS was banned thrice in India due to its ‘militant ideology’ and its involvement in incitement of violence and promoting pogroms, they added.

The assassin of Mahatma Gandhi was an RSS volunteer. RSS and its sympathizers in India at this time, continue to endorse and celebrate the rape of and lynching of Indian minorities mainly Muslims, Christians and lower caste Hindus called ‘Dalits,” Dr. Shaik Ubaid, the national co-chair of Alliance to Save and Protect America from Religious Extremists (ASPAIRE).

Meddling of RSS and its American proxies in American elections is dangerous, its funding of congressional candidates through its proxies is alarming and calls for broad condemnation, he added.

Racist and neo-Nazi movements that feed off Islamophobia and xenophobia are corrosive and diminish American democratic and civil rights standards.

They must be called out and condemned and driven out of American politics,” said Dr Ubaid.

“Sri Kulkarni was invited numerous times to discuss his links with the HSS but he had refused. When asked to denounce the RSS explicitly he has deflected the question multiple times,” said Zeshaan Hussein of Muslim Voice.