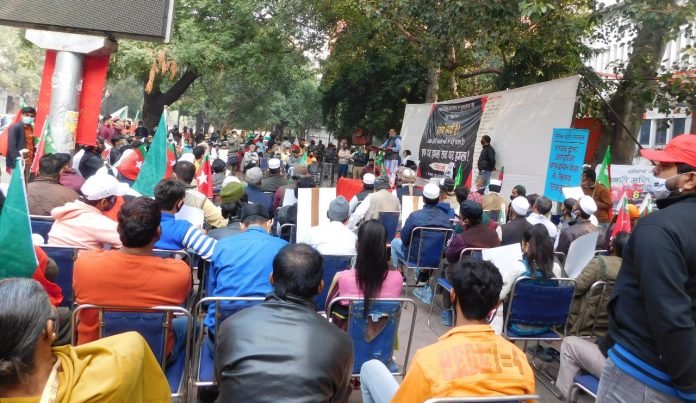 New Delhi: To mark the 29th anniversary of Babri Masjid demolition, protest demonstrations and meetings were held in several parts of the country on Monday demanding to bring the perpetrators of the crime to justice who were let off by a CBI special court last year. In the national capital, political parties and mass organizations held a joint protest meeting near the Indian Parliament while Jawaharlal Nehru University Students Union took out a protest march in the campus. They vowed that the struggle to punish those guilty of the demolition of Babri Masjid would be continued.

Addressing the gathering, speakers pointed out that the Congress-led Union Government and the BJP-led UP Government at that time were both guilty of having permitted the demolition of Babri Masjid. The Congress Party, BJP and Shiv Sena were all guilty of organising the communal killings in Mumbai in 1992-1993. But none of them have been punished, after so many years. All the organs of the Indian state, — the executive, the legislature and the judiciary – have all worked in collusion, to cover up the monstrous crime committed against our people and to condone the criminals.

They gave numerous examples to show that dividing people on a communal basis and organizing communal genocide is a method of rule practiced regularly by our rulers, to smash the unity of our people against the all-sided attacks on our livelihood and rights. It is aimed at breaking the united resistance of our people to the liberalization and privatization program. The speakers demanded that all those guilty of communal crimes must be punished, no matter what positions they may be occupying in the state administration. They must be held accountable and punished for failing to defend the people’s right to life and right to conscience, several speakers clarified that the struggle against communalism is a part of the struggle against the monopoly capitalist agenda of liberalisation and privatisation. It must target both the main parties of the rulers, Congress Party and the BJP. It must be directed against the Indian state which defends the rapacious interests of the big monopoly corporate houses by ruthlessly violating the most basic rights of our people. The aim of our struggle must be to create a truly democratic state, where we, the people will have the power to take decisions that affect our lives and punish all those who violate our right to life, our right to conscience and our right to live with dignity and security.

Members of SDPI protesting in Patna against the #demolition of #BabriMasjid on its 29th anniversary. pic.twitter.com/0ORltETIaR

Speakers also recounted the timeline of the Babri masjid related events. On December 6, 1992, 450-year old mosque situated in Ajodhya was pulled down by a mob of Hindutva radicals led by BJP- VHP top leaders including L K Advani, M M Joshi, Uma Bharti and others in the presence of unprecedented security. Then in November 2019, in a weird judgment, the Supreme Court awarded the Babri mosque and its land to those who demolished it. The judgment drew flak because it was not based on hard facts and evidence.

The Liberhan commission has identified the criminals who led the mob that brought down the historic mosque but all were let off by a CBI Special court in Lucknow in September last year. The CBI did not challenge the verdict in higher courts.

The meeting concluded with the protestors raising slogans reaffirming the unity of our people and pledging to continue the struggle for an end to “state-organised” communal violence and “state terrorism”.

“The struggle to punish those guilty of the demolition of Babri Masjid continues!”, “This is the only way to ensure peace and solidarity!”, “An attack on one is an attack on all!” – these were the slogans on the main banner of the meeting, which summed up the spirit of the protest action. Banners bearing slogans such as “Down with state organized communal violence and state terror!”, “Defend the unity of our people!”, “Punish the guilty!” were mounted on the walls around the meeting.

Ex-BJP MLA threatens a replay of Babri on Gyanvapi