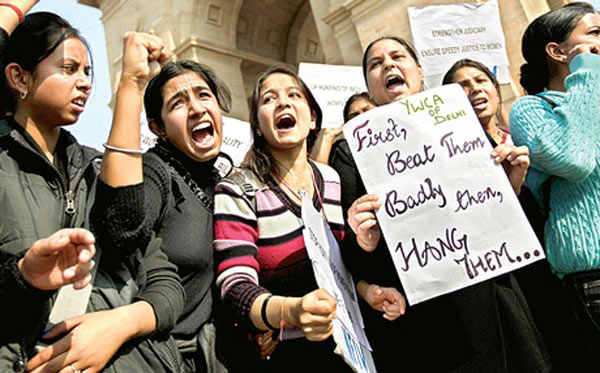 New Delhi: As soon as section 144 was imposed by the government this morning, around 60 people, who spent the night at Vijay Chowk protesting against the gang-rape of a 23-year-old medical student, were evacuated by the police. However, as the day grew people started pouring in from different parts of the city forcing the authorities to allow them in. Latest reports from the site say police have shot tear gas shells to disperse the surging crowd at India Gate.

Security deployment in and around India Gate has been increased. Huge crowd of people have been protesting there demanding stringent punishment to the culprits who raped the woman and brutally assaulted her and her friend in a moving bus last Saturday in Delhi.

Meanwhile, Rahul Gandhi has reacted on the development and said: “We have to work rationally. People are angry but decision cannot be driven by emotions. One of the protesters in the meeting objected to death penalty.”

Reports say protestors are being led by the Bhagat Singh Kranti Sena – the group has been in news at occasions for radical views and acts.

Minister of State for Home Mr. RPN Singh said that he has assured the protestors that the culprits would be put in fast track courts and be treated as a rarest of rare cases. “We are considering their views on changing laws to deal with sexual harassment. We have asked them to discontinue the protest,” he has been quoted as saying.