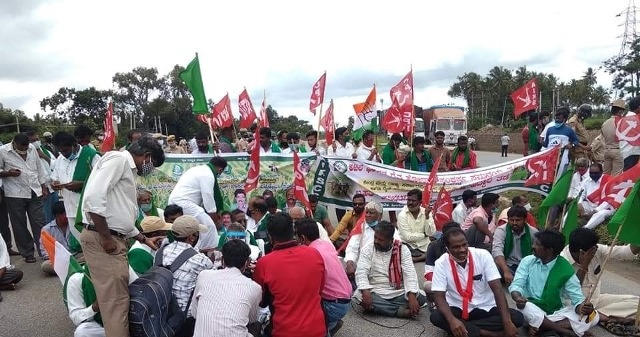 New Delhi:  Responding to the farmers’ organizations’ call, farmers on Friday blocked national highways, rail networks and stage protests and the Prime Minister Modi’s effigies were burnt   at many places across the country against the controversial farm laws. The All India Kisan Sangharsh Coordination Committee (AIKSCC) has given the call of ‘Pratirodh Diwas’ against the contentious farm bills passed by Parliament earlier this week.

According to reports, protesting farmers have blocked the Delhi-Amritsar highway, and huge traffic jams have also been reported from Ayodhya-Lucknow highway.  Punjab and Haryana also witnessed total shut down while farmers in Punjab started a three-day rail blockade against the bills, squatting on tracks at many places on Thursday. The farmer outfits have also decided to call an indefinite rail blockade from October 1.

It has been a historic resistance with masses coming out in lakhs across India, he added.

Farmers were supported actively by the Central Trade Unions, organisations of Workers, Students, Women, Youth, Dalits and Adivasis across the country.

Despite corona pandemic, restrictions, repression and rain in many States the participation in the protest action was overwhelming.

The Bandh called in Haryana and Punjab was total and widespread in Uttar Pradesh and Karnataka. Many leaders were arrested in these States. Many Districts of Rajasthan also witnessed massive protests and Bandh like situation. In Bengal the National Highway was blocked at 92 places and State Highways were blocked at 89 places.

He said over 6 lakh farmers and toiling masses participated in the State alone. In Kerala Dharna and protests were held in front of 250 Central Government offices and many places across the State.

In most States the National and State Highways were blocked and even trains were stopped. Maharashtra witnessed massive protests across the State. At Dahanu the Mumbai Delhi Highway was blocked by thousands of farmers at Dahanu and Palghar.

AIKS President Ashok Dhawale participated in the protest. Tamilnadu saw united protests in hundreds of centres across the State and police action against the protesting farmers.

Effigies of Narendra Modi and the Bills were burnt in numerous places. The widespread nature of protests and massive response has exposed the concerted campaign of Narendra Modi, the BJP Government and corporate media that the protests were restricted only to few pockets in Punjab and Haryana only; Mollah said who addressed a protest rally in Delhi held at Jantar mantar near parliament.

Mollah, who is a former Lok Sabha member, said he condemned the BJP Government for its utter disregard for established Parliamentary procedures, federal principles, rights of States and farmers in the manner in which three anti-farmer Ordinances are being pushed through without wide consultation.

It is to be noted that ‘the lies’ of the corporate media apart, on social media the first four top trends on twitter today were all against the Anti-Farmer Bills.

Mollah said the massive response to the Pratirodh Diwas is a clear warning to the arrogant Narendra Modi led BJP Government and the message is loud and clear.

“Peasants and workers will build the broadest possible unity to resist with all its might the efforts of the BJP to facilitate corporate loot and profiteering at the expense of farmers.”

How Shaheen Baghagh protests have indirectly inspired the farmers’ protest