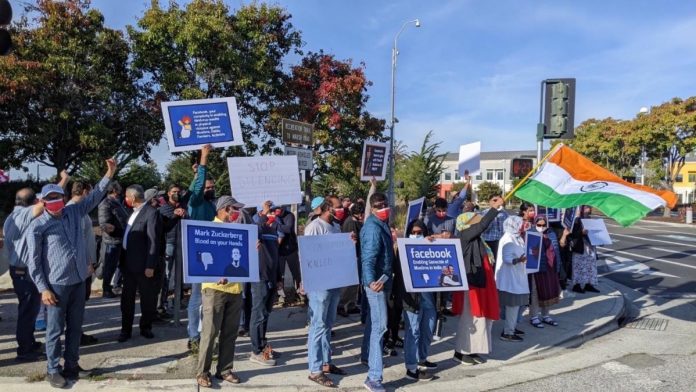 Many of the protesters, who can never return to India, have family in India who are targets of state-sanctioned persecution, discrimination and physical violence.

At a protest at Menlo Park in California, outside the global headquarters of Meta, the new name for Facebook, Inc., Javid Ali of Bay Muslims for Human Rights, said, “Facebook deliberately and knowingly refused to block Islamophobic hate enabling fascist violence against India’s Muslims. Facebook has blood on its hands.” Added Karthic of Ambedkar King Study Circle, “The algorithms used in Facebook are biased against the religious minorities and the socially oppressed. We condemn Facebook for failing to fix these proven issues.”

As protesters braved the rain to march to Facebook’s office in Seattle chanting “Facebook Hatebook,” Kshama Sawant, a member of the Seattle City Council, said, “Companies such as Facebook, Google, Microsoft and Amazon are participants… in the state forces of bigotry, hate, religions and caste oppressions.” Added Hira Singh Bhullar of Khalsa Gurmat Center, a Sikh NGO: “This hate is coming from politicians promoting hate. Shame on Facebook.” Said Javed Sikander, a Muslim activist: “The hatred is destroying the fabric of Indian society.” 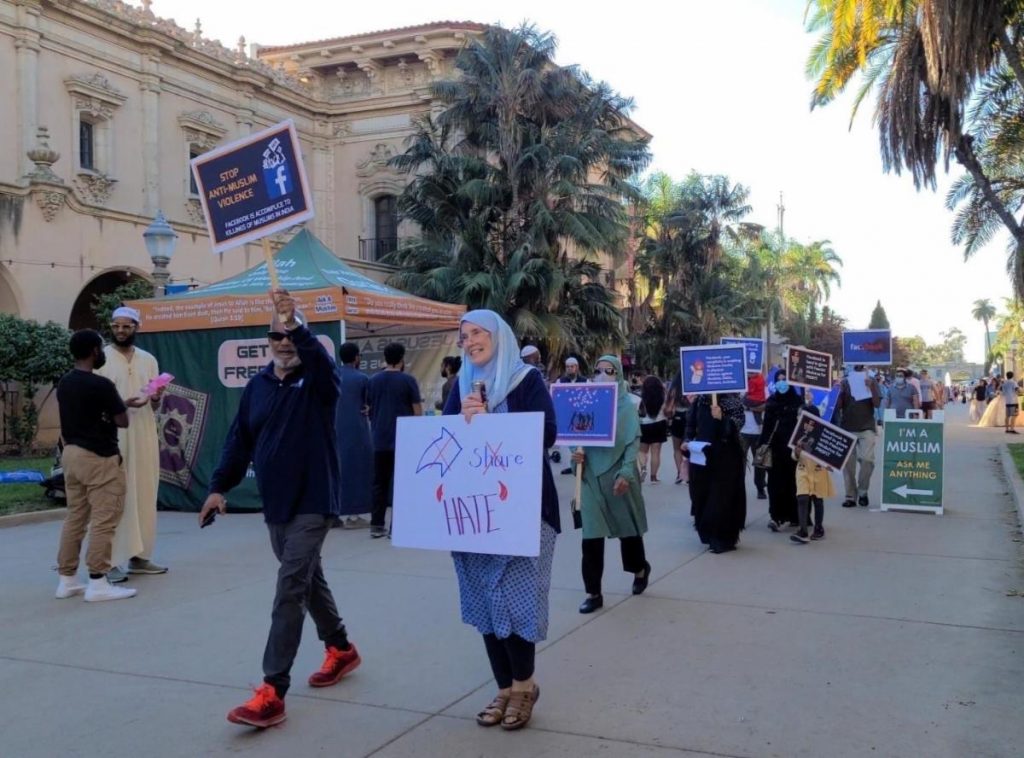 At Charlotte, North Carolina, protester Elyas Mohammed said, “Facebook provided a platform for the right-wing hate-mongering elements to flourish. Had it taken stringent action on fake accounts things could have been different.”

Shakeib Mashhood, a protester at Houston, Texas, said: “Facebook is becoming a tool to spread hate In India, which is very outrageous. More concerning is that Facebook knew that this was happening but it did not take any action. They did not block it.”

At Chicago, Syed Shoaib Qadri said, “We want accountability from Facebook for its criminal behavior.”

Added Musaddique Thange, a protester at San Diego, California, “Facebook is enabling inflammatory and violent rhetoric against Muslims in India and around the world. Facebook should designate RSS, Bajrang Dal and all its affiliates as dangerous and terrorist organizations.”

Zameer Khan, organizer of the Atlanta protest, declared: “Public protests and demonstrations are needed to begin to galvanize the American people and politicians especially into taking action against Facebook for poor management of its social media platform.”

PROTESTERS’ SLOGANS SEND POWERFUL MESSAGES TO POWER
Some of the posters and placards held up by marchers said:
INDIAN POLITICAL PARTIES USING FACEBOOK TO SPREAD HATE SPEECH
As Facebook whistleblower Frances Haugen and Facebook’s own internal documents have revealed, the vast RSS-BJP network is running fake pages and deliberately spreading misinformation, hate speech and incitement to violence, abetted by Facebook’s algorithms.
India is Facebook’s biggest market, with at least 340 million Facebook accounts and 400 million WhatsApp users. The social media giant has increasingly prioritized business interests in India, failing to act against the tsunami of hate and violence enabled by its platforms.

INDIA OF CONCERN ON GENOCIDE WATCH
Because of its ongoing state-sponsored persecution of religious minorities, Genocide Watch has issued Genocide Emergency: India document placing India at stage No. 8 on the 10-point scale leading to genocide, adding that although the government is not yet at the mass extermination phase, No. 9, it is already at No. 10, official denial.
“We think that now in Kashmir and Assam, the stage is at persecution, and that’s the stage just before actual genocide,” said Dr. Gregory H. Stanton, Founding President and Chairman of Genocide Watch.
On Oct. 4 2021, Time Magazine, published an important article detailing how India is headed on the path of a full blown anti-Muslim genocide.
FACEBOOK ACCUSED OF STALLING INDIA REPORT
An article in the weekend edition of the Wall Street Journal quoted human rights advocates as accusing Facebook of stalling its report on steps it is taking to identify and delete hate speech. Detailed coverage in Washington Post, New York Times, and Associated Press have quoted extensively from whistleblower Haugen’s submissions to the U.S. Securities & Exchange Commission and other documents to reveal how Facebook knowingly allowed anti-Muslim hate speech and incitement to violence to proliferate in India.
Contact: India Genocide Watch
Website: https://indiagenocidewatch.org
Email: media@indiagenocidewatch.org