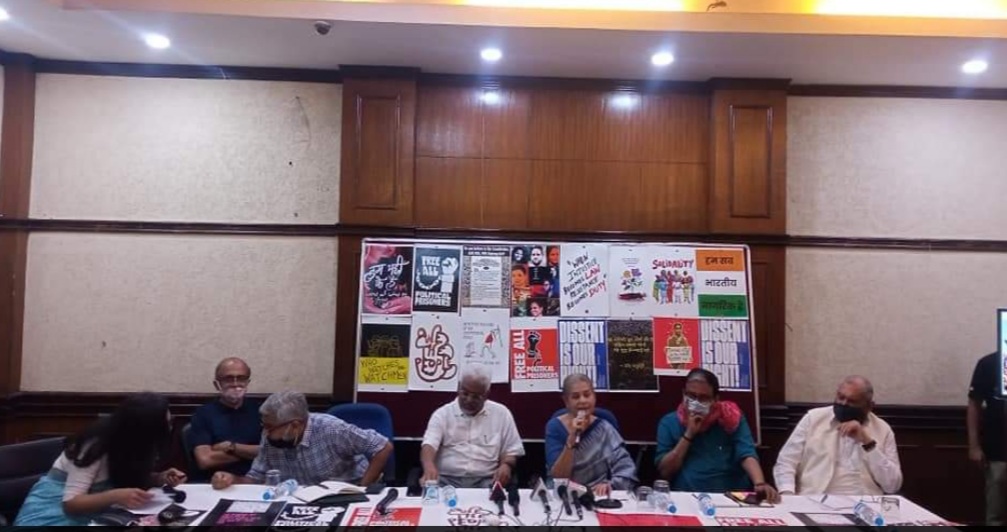 New Delhi: To mark the one year of student activist Umar Khalid’s ‘unjust’ imprisonment, a Citizens Collective consisting of prominent activists, journalists and lawyers on Monday held a public meeting at Press Club of India and highlighted ‘communal biases in the vital pillar of the criminal justice machinery. They demanded that the law and order machinery should stop targeting innocent Muslims, and fabricating evidence and concocting communal charge-sheets against them. 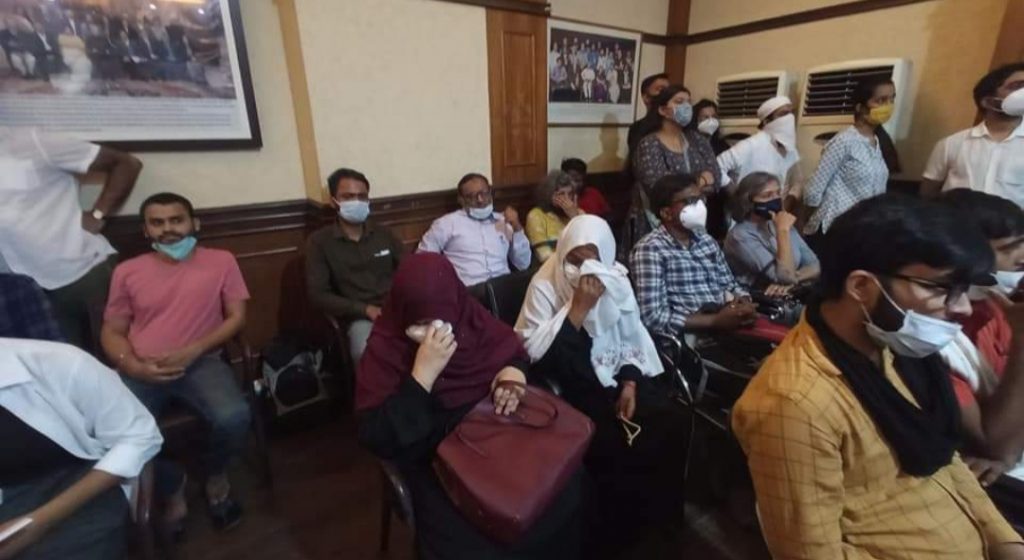 They  condemned the Delhi police for filing openly communal, false charge-sheets against him and said” doctored evidence and dubious witness statements” have been used to rob bright young people like Umar Khalid of their freedom.  They also emphatically said that all the jailed  anti-CAA protestors have been “falsely implicated”.

While raising two critical questions, they asked “Do citizens today have the right to peacefully oppose their government – whether it’s policies, laws or views? Or, will they have to pay the kind of heavy price Umar Khalid is paying with their freedom? And 2) When a vital pillar of the criminal justice machinery – the investigating agencies- themselves betray communal bias, what does this mean for our rights and freedoms, for Umar Khalid’s freedom?

It was exactly a year ago today, on the night of September 13th, 2020 that Umar Khalid Ph.D, a historian and an activist who had been speaking out against the CAA, was called in for questioning by the Special Cell, Delhi Police, and never let out. He had been arrested under the infamous FIR 59 of the Delhi Riots, and later charged under UAPA. He was the 16th person to be booked under UAPA in this FIR. One year later, as Umar continues to be denied his freedom; the case against him lies in tatters, utterly exposed for its falsehoods and communal prejudice.

Like Syeda Hameed said, “His only fault was to uphold the constitution and oppose CAA, NPR, NRC. He saluted the women of ShaheenBagh in Amaravati and called for upholding Gandhi’s ideals. He saluted the women who came out on the streets when students of Jamia were brutally repressed, and stayed outside for 101 days. The regime was scared of this courage. For them an educated Muslim is an eye sore.”

Following this, Farah Naqvi, the moderator requested that the speech of Umar Khalid that he delivered at Amravati in February 2020 be played in the house. This was the speech that was distorted and misused by the BJP IT cell to ‘frame’ Umar.

During the his recent bail hearing when Delhi police was asked about the source and authenticity of the footage, the court was told that this was procured from media houses and when the same media houses were asked, they said that they procured it from Amit Malviya’s tweet that was unauthenticated and doctored. Find here the full speech:

Siddharth Varadarajan spoke of the ridiculousness of the chargesheet. He said, “I would urge people to read the ridiculous chargesheets. One of the arguments being made was that the purpose behind the riots in Delhi on the eve of Donald Trump’s visit was to highlight anti-CAA sentiments and defame the Prime Minister. This is a brazen lie given that International media had been reporting the protests since last December.” “The reason for criminalizing anti-CAA protesters,” he said “is to cover up the real perpetrators of Delhi riots. Umar can be arrested under UAPA but Hindutva leaders who called for genocide against Muslims were booked under flimsy sections so that they can get easy bail.” Prashant Bhushan also echoed the same saying, “This is not an investigation of a conspiracy it’s rather a conspiracy to frame innocents and cover up real perpetrators.”

It is not just Umar Khalid but all activists who are being detained under UAPA in this case are being targeted and falsely implicated merely for opposing the CAA. Recently, the Delhi High Court in a landmark judgment granted bail to three of the accused and at the same time raised serious questions on the police investigation and the use of a stringent terror law like UAPA.It said that the government has blurred the boundaries between democratic dissent and terrorism.

Zafrul Islam Khan highlighted how when he was the Chairperson of the Delhi Minority Commission they “made a committee, but the police did not co-operate at all with its proceedings. The report came nonetheless. But the police went to court demanding that this report must not be placed in any court. Why are they afraid of this report if they have nothing to hide? What we need is a Judicial Commission.”

RJD MP Manoj Jha spoke of Umar as “one of the brightest and most uncontaminated minds of this age.”

He said Meeran Haider was one who was working for relief.  “In these difficult times you will not find heroes in films, but behind bars for speaking up against the govt.” “The government,” he said, “could not deal with Shaheen Bagh; hence it resorted to demonizing it.”

Jasbeer Kaur said “The protesting farmers were also being branded as terrorists, khalistanis etc. They wanted to derail our movement too. ShaheenBagh, just like the farmer, also raised its voice against an unjust law. It is Kapil Mishra and the rioters who must have been sent to prison, not Umar.”

At the end Bharat Bhushan recounted the reasons why young souls like Umar are behind bars. He said, “An authoritarian state needs enemies, Umar has been made into one. The BJP is threatened by a young crop of leadership that has emerged from the people’s movement. Devangana, Umar and the others are all part of the educated articulate non institutionalized organic leadership vouching for secularism and constitutionalism for religious pluralism, ecological justice, gender justice, justice for Dalits, – who scare this govt. That is why he is in jail.”

Speakers pointed out that secular and peaceful demand for justice continue to be followed by a similar pattern of communalized targeting even today. They reminded the audience of Indore, Madhya Pradesh, where just recently ten Muslim activists have been sent notices for externment (exile) from six districts in Madhya Pradesh for protesting the injustice against a Muslim bangle seller and also about continuous lynching of Muslims across the country.

The meeting ended on a note of hope. Of faith in the judiciary. As  in recent weeks courts have  passed no less than 20 orders related to the Delhi Riots cases damning the police for their ‘half-baked chargesheets’ and shoddy investigations. The truth shall prevail – was the message from the meeting.