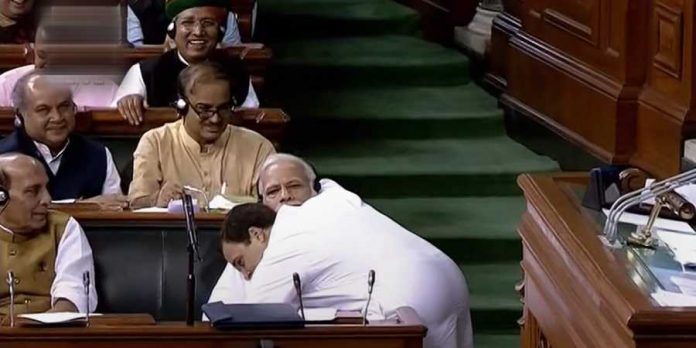 Though Modi Government won the confidence vote, which was a foregone conclusion, it was Rahul Gandhi who stole the thunder. First with his fiery speech, then his now historical hug of the Prime Minister and the lighter moment of winking at his friend—all submerged the Prime Minister’s speech into background. Even those who do not like Modi admit his communicative skills. But yesterday even his lovers had hard time believing how pathetic he was in his speech. Nervousness was clearly visible. Not unsure of himself, he started reading the “facts” like a bureaucrat in a formal meeting.

While a few months back, he had challenged Rahul to deliver a 15 minute speech without the help of a paper, what the country witnessed yesterday was the opposite. Rahul Gandhi spoke for about 40 minutes, did not look at the paper and was at his best in terms of content as well as style. On the other hand, except for a few minutes, Modi was reading the paper. I expected that Modi would humble Rahul in a dignified, smart way by promising him that while he would not spare him in politics he would always give him his Ashirwad whenever he would seek it outside Parliament. Instead, he indulged in jibes and his old rhetoric against the Gandhi family. Ahankar was his answer to pyaar.

While he keeps on saying that he is at the seat of Prime Minister because 125 cr people of India elected him, he forgets that if Gandhi family ruled the country for 70 years it was because the same 125 cr people believed in them for so long. On the other hand whenever BJP came into power, the people soon overthrew them bringing back the Congress led by Gandhi family.

Rahul proved that love has an overwhelming effect and ahankar does not last long in its face. I have never ventured into politics despite pressure from many leaders since my younger days but I still had the opportunity to meet many political stalwarts of the country including several Prime Ministers. I met Rajiv Gandhi when he was PM. Chandrashekhar penned the foreword of my book, “The Devil of Economic Fundamentalism”. I K Gujaral released my book, “The Essence of the Divine Verses”. VP Singh was to release “Islam means Peace” but unfortunately he was hospitalized a few days before the scheduled date. People close to Modi approached me before Lok Sabha elections with the offer a one to one meeting with him but I declined it twice. But I really felt good when I met Rahul Gandhi in 2013 on his invitation.

VP Singh was to release “Islam means Peace” but unfortunately he was hospitalized a few days before the scheduled date. People close to Modi approached me before Lok Sabha elections with the offer a one to one meeting with him but I declined it twice. But I really felt good when I met Rahul Gandhi in 2013 on his invitation.

When in 2012 my approach paper, “Muslim Vision of India: Destination & Roadmap” was released I sent its synopsis to many political leaders of the country. The only one to respond was Mr. Rahul Gandhi. Within two days, I received a call from his office that he would be willing to discuss the paper with me, and a meeting was arranged within a couple of days. Mr Sirajuddin Qureshi, President IICC, New Delhi accompanied me. Mr Gandhi met with such a friendly enthusiasm that really amazed me. When I reached his room, I sat on one chair and Mr Qureshi on the other in front of the table. The middle chair was empty. After a while, Rahul Gandhi entered the room and instead of sitting on his chair, he pulled the one between Mr. Qureshi and me and sat on it. I was pleasantly shocked at the gesture. He asked “who is Javed Jamil” and then I introduced myself and Mr. Qureshi. On his asking, I started giving a presentation of the Vision document. I made a point to point presentation to him on how the country’s policies have become “corporate-friendly” and why it is necessary now to shift to a “peoples friendly” approach. I explained why there was a need to differentiate between “support for business”, which is paramount for the growth of the country and “support of businessmen”, which is responsible for the rise of economic disparity. I explained to him how Muslims should be encouraged to play a meaningful role at the national level, and if that has to happen what should be the roadmap for the socioeconomic empowerment of Muslims in Secular India. While I was presenting, at one point he suddenly stopped me and said, “pause, pause…first let me know what my background was.” I asked him why he suddenly asked that question. “Because whenever someone tries to present his points to me,” he said, “he normally cannot speak for more than a few minutes (mimyaane se lagte haiN munh neecha karke) and you are speaking for well over 40 minutes and so I want to know “is confidence ke peeche raaz kya hai”. He then arranged a meeting of mine next day with some of his close confidantes and said “he would like have a long term relationship with me and would expect my feedback on national issues.” He finally asked me to tell in one sentence what I would like him to always remember. I said, “Please always be “People-Friendly” rather than “corporate-friendly” and never forget to include Muslims among the people”. He smiled and shook hands with the warmth I would never forget.

His performance on Friday in Lok Sabha proved that he values humanity, equality and justice and that he wants to counter hatred with love. But it is clear that with the kind of the training Modi has the nation cannot hope to have a change of heart in near future. Unfortunately, for them religion means discrimination and hatred on the ground of religious identity rather than religious morality which preaches love for all, humanity and fight against social evils. And clearly now it is Baniyawad, not the Brahmanwaad, that has taken over the Hindutva lobby and they are leaving no stone unturned in establishing an unchallenged hegemony over the political and economic power of the country.

The stage is set for a keen tussle between Modi and Opposition. The Friday Lok Sabha show was the beginning of the titanic clash of the two figures; Rahul and Modi. Hopefully the clash will remain largely peaceful. For his part, Rahul will be better advised to counter the communal card with an onslaught on the economic front and a full-fledged war against Economic Inequality.