BJP is deep into its morass but the BJP sponsored mainstream media, with one or two exception, is hell-bent to provide BJP with the much needed ‘oxygen’ and has been successful into making BJP live in a make-believe world, that it may reclaim to the Lucknow crown in 2022, whereas the reality is totally against BJP, as from what is coming as a humming from the ground. It is only therefore from the scope of social-media, the real and alternative element from the masses which can be accrued, or else the mainstream print and audio-video media, through its well-concocted surveys and sponsored news items, is making desperate attempts for BJP come to power again, despite its massive in-fighting, as it has been made more than clear that BJP CM Ajay Singh Bisht is not to repeat as CM.

BJP has been able to engineer a coup in the form of Aparna Yadav coming into its fold, as an answer its Cabinet Ministers switching-sides towards Samajwadi Party, yet as the elections are getting nearer, the problems for BJP are on the rise, as the latest video has suggested from NOIDA, which conveys that BJP is no more welcome inside NOIDA. It is one of the poshest constituency in UP adjacent to New Delhi. People are by and large angry with BJP, owing to its disastrous last five years, while sometime BJP’s own leaders and even its own cadres are against it. The core voters of BJP have become ‘so-disgusted’ with BJP leadership that even sankalps (swears) are taken to not even let the BJP candidate enter the area, let alone vote for it.

According to Abhishek Chauhan, which is never to attract eyeballs on mainstream media, it is claimed that NOIDA people have sworn that only a local would be allowed inside, and that NOIDA wants a change, as friends from villages-after-village have gathered to swear that BJP candidates are a strict ‘no-entry’ and Rajputs would oppose, as BJP MLA has done nothing for Rajputs. The video has been tagged to PankajSinghBJP, who is the son of Union Defense Minister Rajnath Singh and is contesting in 2022 for UP Assembly. Abhishek Chauhan is a local resident of the area. 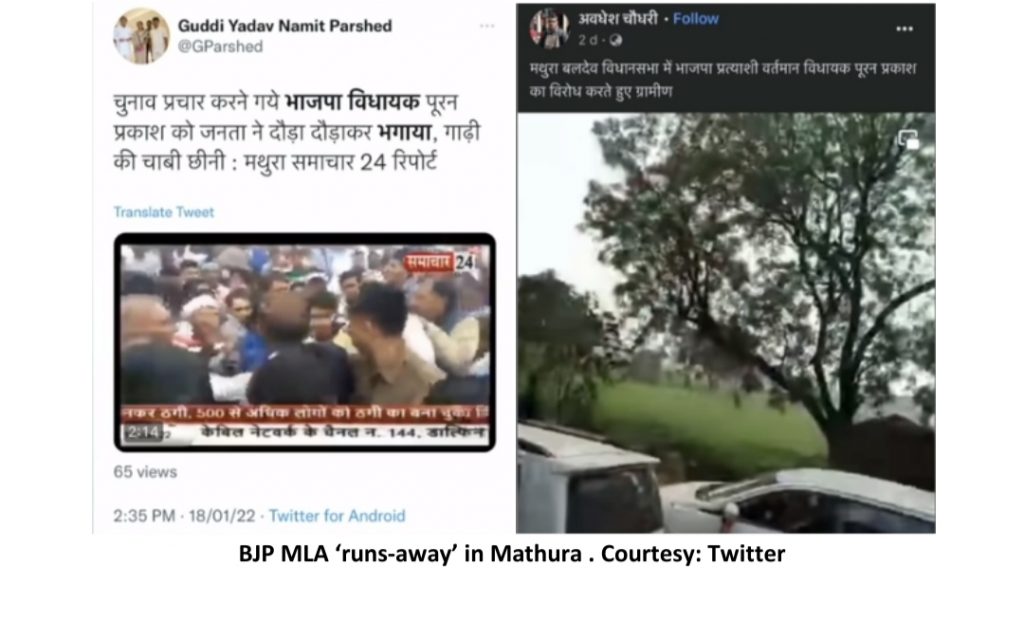 This opposition of BJP is now a state-wide phenomenon as in Mathura, the BJP MLA Puran Prakash had to flee to save- his-skin due to massive protests against him. The BJP candidate had to abandon his car too as the keys of the car were snatched-too, as per Samachar 24. If this video was to get displayed on any mainstream media, which is never a possibility, it was to have shown the anger split on the road, against the BJP candidate, as people surrounded the car, and snatched the keys from the driver. The BJP representatives are now into facing the real heat from the people for an absolute boycott, across the state.
BJP candidates are not only facing hiccups from general masses, it is also imploding from inside, and perhaps, heading towards its own catastrophic failure as the rebellion inside the ranks of BJP is also now starkly visible. A report in Navbharat Times on January 18, tells that after the declaration of election dates, there is now a burning fire inside BJP, particularly in context to the distribution of tickets, which has triggered massive dissent from within the party itself. BJP is slowly getting into the phase when once its Backward Caste Lodh CM (late) Kalyan Singh opposed its Upper Caste Hindu leader (late) Atal Bihari Vajpayee.

If what is visible on the walls from Ramnagar Constituency of BJP MLA Sharad Awasthi, it can easily ne concluded of the anti-incumbency against him. There seems to be a general anger against him.

Another video which has resurfaced on social-media is from Balod Assembly seat where was rally taken out by BJP and had met with stiff opposition on the roads by RLD members calling for Jayant Chaudhry instead. He has aligned with SP Chief Akhilesh Yadav.

What was to have been the position if BJP MLA from Balod was to have participated in the same rally? Perhaps, there were to be unruly-scenes , which may have been just averted, but such general apathy for BJP, is what can easily be sensed, and the prime reason for it, most arguably, has been the passing-off of the anti-farmers laws in September 2021, forcing farmers to protest for more than an year, and which BJP had to withdraw later. The farmers agitation saw more than 700 deaths due to cold/heat and fatigue etc and the seething anger of farmers had got further aggravated when Ajay Mishra, State Minister for Home son Ashish Mishra crushed four-innocent farmers under his cavalcade of SUVs. Ashish Mishra is right now in jail, charged of murder by SIT, which had to be formed at the behest of the Supreme Court.

Going by the yardstick of people’s anger against BJP, there won’t be any surprise that BJP candidates might just be found ‘scurrying for cover’ and what may be called as ‘garlanded by shoes’ as people are now openly venting their grouse against the ruling dispensation. If this trend can be assuaged then it may comes out, that even when BJP might bludgeon its entire recourses, of Saam/Daam/Dund/Bhed -a genre for ‘either by hooks or by crooks’, yet it may find a very high-tide against its prospects of regaining power again in UP. The position of BJP in other four-states, where elections are to be underway i.e. Punjab, Uttarakhand, Goa and Manipur, also does not resonate any worthy picture. The big picture is what to emanate from UP, from where are the maximum MPs of BJP are, and if BJP gets drubbed in 2022, the net resultant of it, might shatter the entire BJP horizon in 2024 at the Center.

Let’s wait as how the game sums-up in UP first.