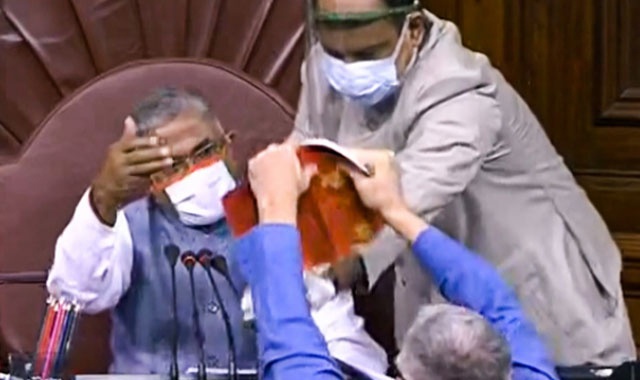 New Delhi: A day after an uproar occurred in the upper house against the passage of agricultural bills, Rajya Sabha Chairman M. Venkaiah Naidu on Monday suspended several MPs who were accused of causing ruckus in Parliament.

The motion was moved by V. Murlidharan, the MoS for Parliamentary Affairs, and the House suspended Derek O’ Brien and Dola Sen of TMC, Rajeev Satav, Ripun Bora, Nasir Hussain of Congress, Sanjay Singh of AAP and K.K. Ragesh and E. Kareem of CPM.

The members resorted to sloganeering after the resolution was moved by voice vote in the Rajya Sabha.

Eaelier Chairman Naidu said that it’s a sad day for the democracy and “unfortunate” and “condemnable”, he rejected the no confidence motion against Deputy Chairman Harivansh Narain Singh citing rules.

On Sunday the House witnessed unruly scenes when Trinamool MP Derek O’Brien approached the Chair and tried to snatch a mike while citing from the rule book. When his objections were overruled, an aggressive O’Brien tore the rule book by calling the Bills “Kala Kanoon” or black laws, leading to adjournment of the House for a brief period.

The Trinamool leader was also heard saying: “You cannot do this” to the Chair. At one point in time, the aides of the Deputy Chair, who was conducting the House proceedings, had to come forward to shield him.

Despite repeated requests, many opposition members reached the Well of the House to register their protests against the Farm Bills.