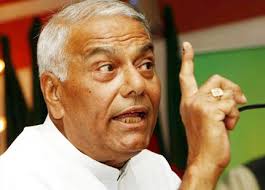 New Delhi, July 15 : BJP leader Yashwant Sinha Monday said that his remarks on the 2002 Gujarat riots were not meant to advise Narendra Modi or the BJP, but were a message for the entire political class.

Sinha Sunday said that Modi’s remarks on the riots would take the focus away from the issue of corruption.

“If there is any advise, it is for the entire political class. Actually the economic situation is very serious. The country is in serious trouble, the rupee is falling, industrial production is in negative,” Sinha told reporters here.

“This is a serious trouble, But the political class is not discussing this but useless issues,” he said.

Sinha added he had not given any advise to Narendra Modi and the BJP. “If there is a message it is for the entire political class.”

Modi Sunday launched a multi-pronged attack on the Congress, accusing it of failing to address poverty in its long rule and using a “veil of secularism” to cover its failures.

He also questioned the outcome of the food bill, and hit out at the UPA government over the falling value of rupee and its claims of enacting rights-based legislation. People need action, not acts, Modi added.—IANS.